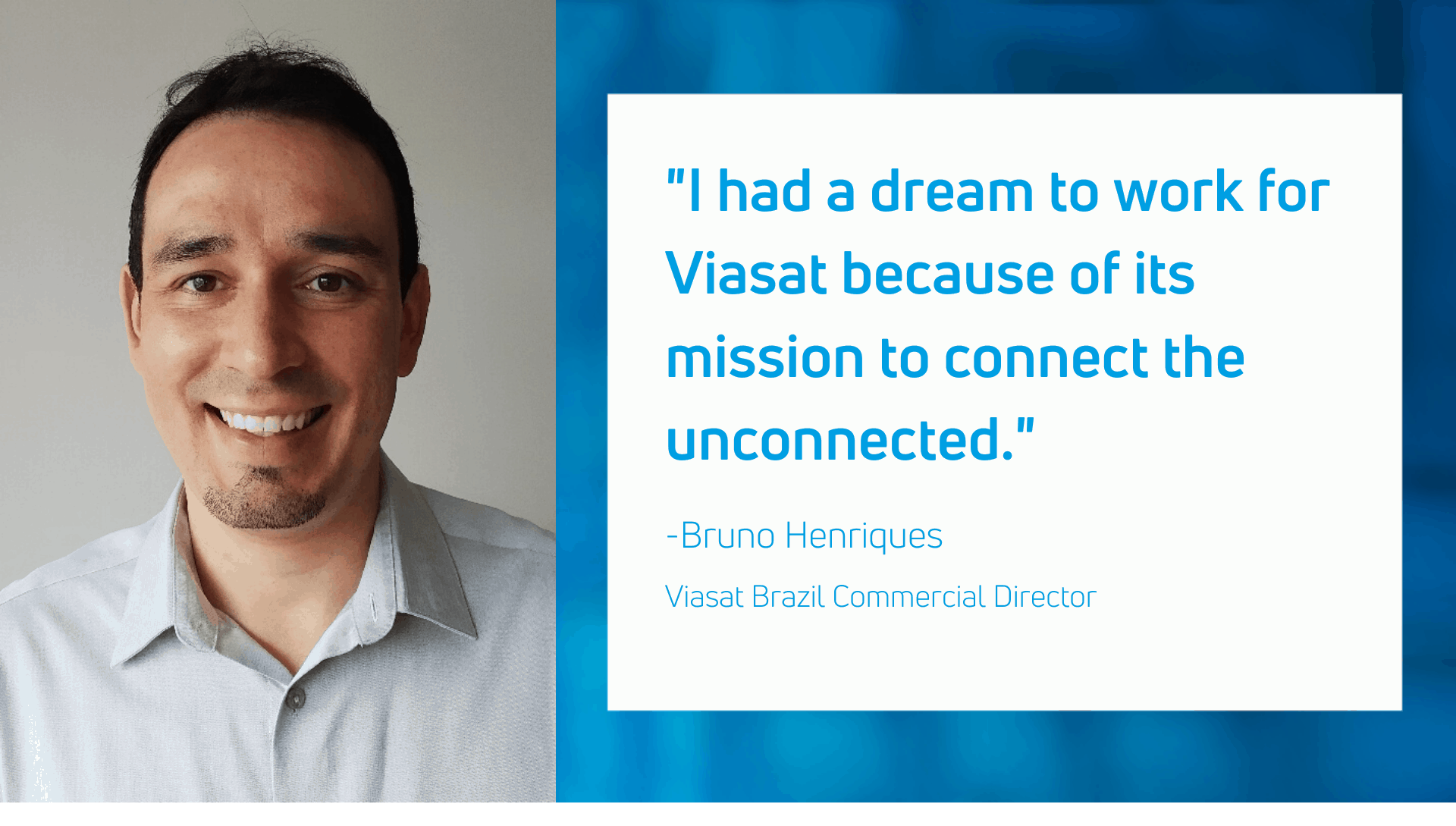 As a native Brazilian, Viasat’s Bruno Henriques has a clear understanding of the need for home internet in his home country. Several members of Henriques’ extended family live in the Amazon rainforest, where their only access to the internet is via a government-provided connection at a community center.

“The site is very isolated from the rest of the world and this is their only method of communication,” Henriques said. “Now, we are able to bring the internet to houses there. But it’s more than just helping my family. It’s helping all the Brazilian people get connected.”

Viasat launched its residential service in several Brazilian states July 7, with Henriques leading the effort as its commercial director.

“We plan to provide higher data caps, higher speeds and good functionality – a simple, transparent service that meets people’s needs,” he said. “We are focused on delivering a premium service, which will be a game changer in the satellite internet market here in Brazil.”

Viasat is ideal for the approximately 15 percent of Brazilians who live in the country’s rural and remote areas, where terrestrial telecommunications companies typically don’t have infrastructure to offer service. And Henriques is ideal to direct the effort because he spent the last three years at Telebras – Viasat’s Brazilian partner.

“I’ve always had a passion about space,” Henriques said. “One of my main career goals was to work in the space industry.”

His work at Telebras – preparing for the commercial utilization of its SGDC-1 satellite – was for him an ideal marriage of engineering and space technology. But by 2019, Henriques said his mission was accomplished.

“I had a dream to work for Viasat because of its mission to connect the unconnected,” he said. “Everyone in the satellite industry knows Viasat, and knows it’s a very good company to work for.”

Henriques realized that dream last November when he joined the company. The experience has been everything he imagined.

“It’s amazing,” he said. “Every day is a different story – good projects, a lot of opportunities. I’m having a lot of fun, producing a lot, and getting results.”

Like other Brazilian natives who’ve joined Viasat, Henriques has noticed some cultural differences between employees of U.S. and Brazilian companies. He’s also seen people from both companies adapt those customs to better work together.

“Here in Brazil, it’s very hard to start a meeting on time,” he said. “Now we are changing that. Our partners in Brazil are also changing their behavior.”

“You need to build a relationship, have conversations and do a lot of follow-up,” he said. “Our U.S. employees are now much more aware of the importance of relationships down here.”

Residential internet is the latest product line Viasat has rolled out in Brazil. In its partnership with Telebras, the country’s state-owned telecommunications company, Viasat taps into capacity on SGDC-1. Working together in a government program called GESAC, the two companies have so far connected 2.5 million students whose schools previously had either no internet or substandard internet service, and a host of other government sites.