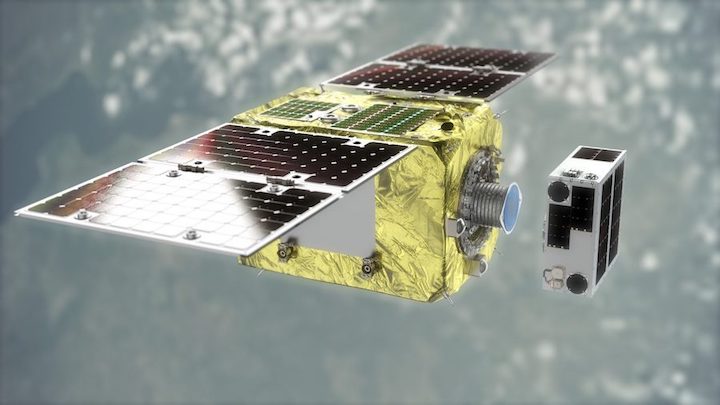 There’s a lot of debris floating around in space. In particular, the area just a few hundred miles above Earth, known as low-Earth orbit (or “LEO”), has become increasingly congested with space pollution ranging from flecks of paint to pieces of rockets and defunct satellites.

It’s an area of increasing concern for the space industry, especially as a growing number of LEO satellites are being launched and thousands more are planned in coming years. Viasat has been a strong proponent of addressing the collision risk that comes with this congestion, and while some potential solutions are still pending on the regulatory side, there’s another area that shows near-term promise: beginning the cleanup of the debris already up there.

One company at the forefront of developing the technology to do just that is Astroscale. In March, the company launched two small spacecraft from Baikonur, Kazakhstan. One is the “servicer” satellite, a prototype for a future debris-clearing spacecraft. Attached to it is a smaller satellite called “the client,” which poses as a defunct satellite for the demonstration. It’s all part of “End of Life Services by Astroscale” (ELSA) — a program offering operators the chance to tidy up the skies after their satellite missions have ended.

As part of the ELSA-d (demonstration) project, Viasat is providing a portion of the ground network required to communicate with the client satellite. Along with three other ground-segment partners — plus Astroscale’s own ground station in Japan — Viasat’s Real-time Earth (RTE) network will provide the necessary link to the satellite for a series of tests, slated to start this summer.

Initially, she says, the client spacecraft simulates a non-tumbling satellite. The following phase, Gravereaux adds, will be the most challenging as the team attempts the same capture with the client tumbling.

“All three phases will be heavily reliant on Viasat, because the client will be separated,” she says.

“We have a lot of buildout in mid-latitude locations, which can cover a lot of spaces you’d miss if you were just going over the poles,” he says. “That filled in a lot of gaps for Astroscale.”

“We have larger aperture antennas, 5.4 meter and 7.3 meter that allow customers like Astroscale to close the link sooner and reduce the bit-error rate,” he says. “That gives them a cleaner signal to and from the satellite along the passes.”

“Three years ago, we established a special relationship with SSTL so that we could, in our software, take their protocol and implement it in our baseline so that we could interface with all of their spacecraft that they fly over time,” Williams says. “That relationship has prove to be highly valuable with customers like Astroscale, where we're one of the few companies that offer that Saratoga protocol with the Surrey satellites. Those kind of teaming relationships are key to our business model.”

Gravereaux says that made it very easy and efficient to test the system with Viasat.

“It saved a significant amount of time and effort with the integration,” she says. “The risk of it not working was lower because we knew the spacecraft was compatible with the Viasat ground stations.”

Developed over the past few years and still expanding, RTE is a network of ground stations around the globe aimed at giving satellite operators, without their own ground segment, an affordable option. RTE also improves on many previous connections these satellites had by increasing the number of ground stations and adding the ability to transmit information in real time.

“There’s a wide variety of things you can do from space, and the vision for our team has always been to support all those different types of missions,” says Williams. “We’re proud to be supporting Astroscale with ELSA-d. It’s something we see as essential to the future of space, when just one bad LEO incident can cascade into a much bigger situation.”

Compared to LEO satellite applications such as Earth observation, which generally require only brief connections to transmit data back to Earth, this ELSA-d mission requires up to 30 minutes of connectivity for the servicer to attach to a piece of debris via the magnetic docking plate. To address this, Astroscale — along with its ground-segment partners — put together a total of 16 ground stations across 10 countries for seamless connectivity.

A future scenario for the ELSA system would see the servicer spacecraft approaching a defunct satellite and attaching to it magnetically. (Gravereaux says Astroscale’s magnetic interface is at the heart of its proprietary technology.) Once attached, the servicer goes into action and pushes the debris into the atmosphere, where it burns up.

“This is the first end-to-end debris removal mission of its kind, and it wouldn’t be possible without all the hard work being done on ground stations,” Gravereux says. “It’s a little bit less visible to the general public, but all of the collaboration has been crucial to the success of this mission.”

Hawkins notes that, along with the technological firsts with ELSA, there’s a bigger story everyone should pay attention to.

“We are very excited to be a part of this mission,” Hawkins says. “It's innovative, breaking new ground, and it also relates to something that we can champion together in the industry, which is sustainable space. We all need to ensure we're taking care of this limited resource — particularly with LEO orbits — so everybody can continue to use it into the future.”

Watch a video demo of the Astroscale ELSA project