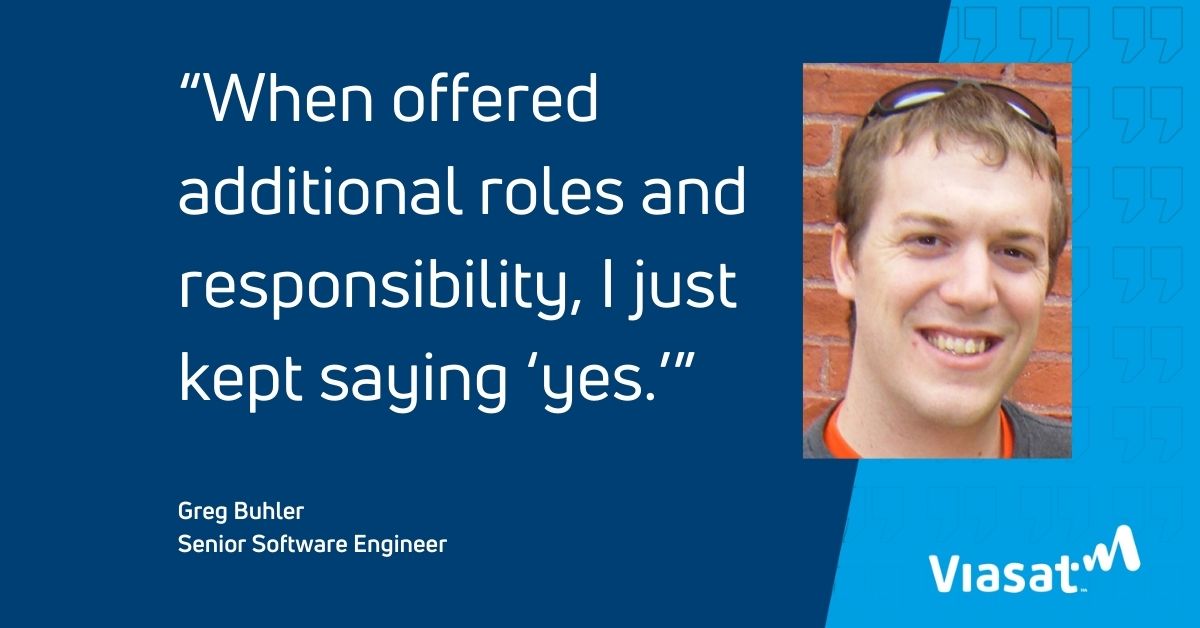 Senior software engineer Greg Buhler is closing in on an anniversary: twenty years working at Viasat. It’s a milestone he couldn’t have imagined in 2002, when he was fresh out of college. But, Buhler says, Viasat has repeatedly presented him with new opportunities for growth, keeping him both intellectually challenged and satisfied.

“I really do enjoy working here,” Buhler said. “I don’t feel stuck in one position or pigeonholed in one area of the company. When I’ve felt the need for a change, I’ve been able to move around within other groups and find something that’s exciting again.”

It’s also afforded Buhler a lifestyle he enjoys. He and his wife, ToniAnn, are raising four children in their San Marcos, CA, home. Both parents are East Coast natives who became smitten with the Southern California lifestyle and climate in the early 2000s.

“I love it out here,” Buhler said. “I always think about going back because I have family in New York, and we did go back to Massachusetts for about four years. But we both ended up missing California.”

Buhler grew up in Yonkers, N.Y., the son of an electrical engineer. The two often worked on projects together in his father’s in-house lab. As Buhler began to ponder a career, personal computers were becoming mainstream. Buhler learned a rudimentary programming language in school, taught himself Pascal from a library book and enrolled in a computer-science class in high school.

“That’s when I decided I wanted to get a degree in computer science,” said Buhler, who earned that degree at Rensselaer Polytechnic Institute (RPI). While he was a student, he interned at MTV Networks, working in its product technologies department. The crew managed MTV’s computer infrastructure and networks – a job that gave Buhler access to show sets and on-air talent. A cool job, to be sure, Buhler said. But while MTV offered him a full-time position, it wasn’t in Buhler’s preferred field of computer science.

When he learned about Viasat at an RPI career fair, Buhler knew he’d met his career match.

“I always had an eye on California,” he said. “I wanted to try something radically different from New York. So I intentionally interviewed at companies that would have me move there. Viasat ticked that box off.”

And a lot of other boxes as well.

“And if you like the outdoors, it’s hard to undersell how nice San Diego is.”

Buhler’s fiancée was sold as well, and she joined him in California.

Buhler started with Viasat at a transitional period. Instead of programming, he was first assigned to work in a software-engineering process group. That twist of fate helped set his course with the company.

“I learned a lot about software engineering, and it’s helped guide the way I do my job to this day,” he said, adding that it also helped him to meet engineers and leaders throughout the company he otherwise would not have. “When offered additional roles and responsibility, I just kept saying yes.”

Later in his Viasat career, Buhler transitioned from the government side of the business to commercial, where he has stayed. He first worked on a mobile version of the SurfBeam 2 modem that provides Viasat Internet to JetBlue, the company’s first in-flight connectivity airline customer.

“My job was to figure out how to make it so the modem can be handed over from one satellite beam to the next,” he said.

Buhler still is part of the SurfBeam modem team, though he’s transitioned through several roles, including managing the team.

Presently, he’s working as the software architect on Blackbird, a new residential modem designed to work with ViaSat-3. For Buhler, nothing is more satisfying than designing cutting-edge technology that will impact the company for years to come.

“I enjoy working on new technologies, which contribute significantly to Viasat’s success,” Buhler said. “It’s the first real software-defined, fully programmable radio we have, and it runs 10 to 100 times faster than our previous modems were capable of. It will be the basis of all our future products. It’s pretty exciting.”

When he’s not working, Buhler enjoys mountain biking and spending time with his family. Their bond, he says, has grown even stronger during the pandemic.

“Working from home has gone surprisingly well,” he said. “I get to see my family a lot more than I did previously. Having four kids was almost a benefit during quarantine. We were never lonely.

“I hope this new bond outlasts the pandemic, but there’s no question this past year will have a lasting impact on the family."