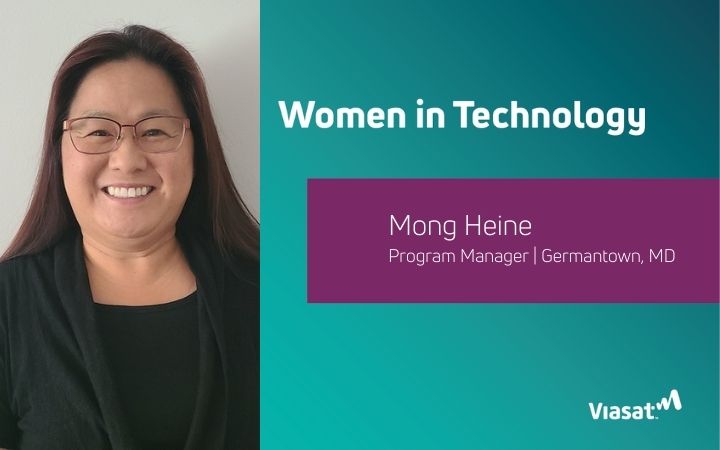 Mong Heine learned early in life to be a self-starter – a lesson that’s carried her through a master’s degree and to her current position as a Viasat program manager.

Heine’s parents were hard-working immigrants and restaurateurs, often working such long hours that she and her siblings managed the household and their school responsibilities largely on their own. Through her parents, she witnessed the rewards of hard work, but also realized she could follow a different path.

“I learned to be self-sufficient and to work hard,” Heine said. “And that it doesn’t matter how smart you are; if you don’t try, you’re not going to succeed.

“It was an unconventional upbringing, but I think I did OK. I love my life today. I don’t think I would change it for anything.”

A big part of what she loves is her work at Viasat. Heine is a program manager based in Viasat’s Germantown, MD office, overseeing work on the reference and transceiver, which transmits and receives data from the satellite that makes up a portion of the ViaSat-3 ground system. She also manages the next-gen hub transceiver and the mobility terminal programmable logic team. In all cases, her job is to work with the teams to keep the programs on schedule.

“There’s a lot of variety in my day, and that makes it go by pretty fast,” she said. “I love it.”

Heine says she wouldn’t have reached this sweet spot in her life without receiving encouragement at several critical junctures. The first came from her high-school best friend, who pointed out Heine’s talent in math and science and urged her to pursue a degree in physics. Her math-team coach then suggested she consider the Rochester Institute of Technology (RIT). At the time, Heine had not yet heard of it.

“I’d always done well in school, but I didn’t feel I had a lot of direction on career choices,” she said. “Those two people helped guide and shape me.”

Heine applied to RIT, figured out how to get the financial aid she needed and enrolled as a physics major. She soon discovered another area of study that suited her even better.

“I didn’t have the love of physics to be a physics major, but when I switched to electrical engineering, things started clicking,” she said. “I started excelling and everything got easier.”

Heine excelled through her bachelor’s degree and then on to her master’s at Baltimore’s Johns Hopkins University.

She worked briefly for the United States Patent and Trademark Office in Arlington, VA, then in digital hardware and firmware engineering for Litton, later acquired by Northrop Grumman. She also worked for a smaller Germantown company called Multispectral Solutions before joining Viasat in 2008.

“Program management was always something I wanted to do, even when I was working on my master’s in engineering,” she said. “When I mentioned it to my supervisor, he helped me along. He mentored and guided me, and really helped open doors that led me to the opportunities I have now.”

While Heine is content in her current position, she’s open to future possibilities. Having options is part of what she enjoys about working for Viasat.

“I love working for this company, and I always try to keep an eye out for opportunities that might fit me and new ways I can contribute,” she said. “I love that you can search for internal job postings on the portal; you don’t have to wait to hear about them. And I feel Viasat definitely tries to promote from within. Viasat is very much for the people.

“I’m also just amazed at how much Viasat does. We do everything, right down to selling the service. And that gets back to opportunities. If you’re not happy with your current position, there’s something else at Viasat that will fit your needs. You just have to go and look for it.”

When she’s not working, Heine is the busy, married mother of three daughters. The family is happily learning the joys of pet ownership by raising their first dog – a golden-doodle puppy.