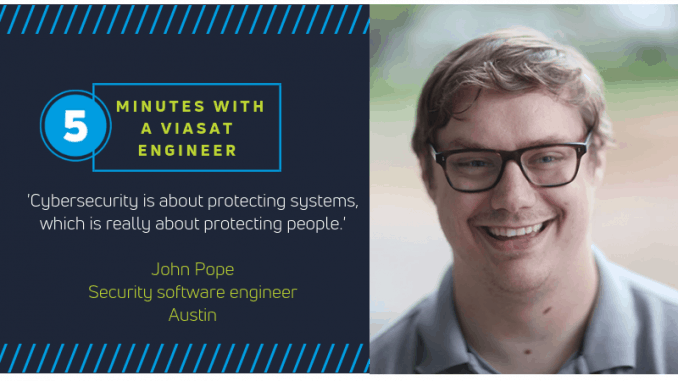 Viasat security software engineer John Pope listens to country music while he codes, a merger of two of the things he loves most. Though he’s a relative newcomer to Texas, Pope says moving to Austin and working at Viasat feels like coming home. So much so the 27-year-old security software engineer is trying two-stepping – almost a requirement for living in Texas, he said. “In other places, when I sat back and asked myself, ‘Can you see yourself staying here?’ — I always decided no,” Pope said. “But I could stay here 10, 15, 20 years. It’s a lot of fun and it’s still growing. And I’m really excited about Viasat’s global expansion.”

“When you’re practicing cybersecurity, you get a chance to prevent fraud, security breaches and identity theft – all things that harm people.”

The Arkansas native was pursuing a mathematics degree when he discovered the knack for computers that led him to Austin. He traces an early fondness for math to his grandmother, who left mathematics flash cards around the house when Pope was young. In fact, his initial exposure to Java in an introductory college computer class was daunting. But a second course on digital logic got his attention, and a follow-up data-structures course hit home. “It was a direct application of my favorite part of mathematics and the logic behind it; all of that is so key to being able to program,” he said. “From that point on, I decided to continue with computer science.” Pope earned dual bachelor’s degrees in mathematics and computer science. He was working as a software developer and DevOps engineer in Kansas City, Mo. when the 2016 mass shootings in Dallas and Orlando happened. “It was a culmination of tragic events that made me feel like I should do more to try to help, and moved me toward cybersecurity,” he said. “In general, cybersecurity is about protecting systems, which is really about protecting people. When you’re practicing cybersecurity, you get a chance to prevent fraud, security breaches and identity theft – all things that harm people.”

At home at Viasat’s Austin campus

Pope earned a master’s in cybersecurity in 2017. Later that year, he started working at Viasat. He was among the first to work at the Austin site, which has a staff of 25 focused on cloud, infrastructure and security engineering. Located in a contemporary space in the heart of Texas’ most progressive city, the office caters to new and recent college graduates. “Austin takes the cake; the culture and everything about the city seems young,” Pope said. “And I’m close with my co-workers. I enjoy spending time with them during and outside of work.” It’s not just his co-workers Pope loves. The work is fun and ever-changing, with the opportunity for new challenges always available. “There’s so much to learn in security it’s hard to pick just one area,” he said. “I’m really interested in cryptography because of my mathematics background. “And I appreciate all the opportunities for intellectual growth Viasat provides,” he said. “Whether it’s through learning a new programming language, visiting conferences or taking on one of the many other opportunities Viasat provides, I have the support I need to develop my career here.” As much as he enjoys his position now, Pope believes the best is yet to come. He’s proud to work for a company that’s bringing the internet to previously unconnected remote communities in Latin America; technology that will help millions more when the ViaSat-3 satellites are in service. Pope doesn’t rule out the idea of traveling internationally to help Viasat with its global expansion – but his heart is already firmly rooted in his new home state. “I enjoy assisting with deployment of secure infrastructure, and as opportunities come up, I definitely intend to jump on them,” he said. “I’m excited for travel opportunities, and I think I’d like to spend a few months in another country. But probably not necessarily for any sort of permanent relocation; I really do love Texas.”