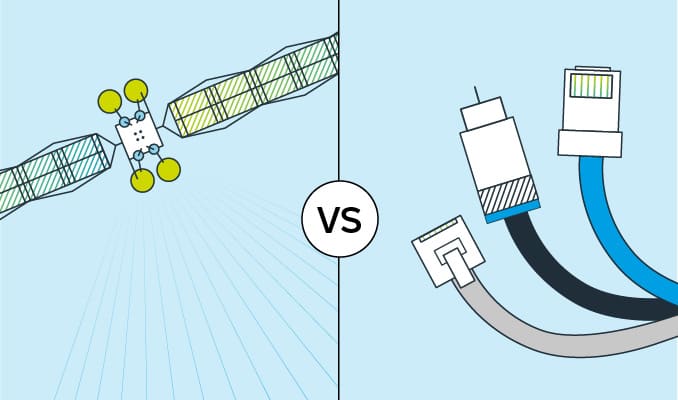 When Viasat set out to launch an all-new satellite to improve coverage across the U.S. and beyond, one big goal was to rethink internet speeds of at least 25 Mbps as a basic necessity — not a luxury. In many areas, people didn’t feel like they had much of a choice, since existing providers were offering substandard service.

The fact is, phone company DSL and local wireless providers (known as “WISPs”) often only offer speeds in the 5-10 Mbps range — and sometimes even lower in rural areas. There are many different reasons for why DSL, WISP, and cable providers don’t offer higher speeds in all areas. But no explanation is likely to satisfy frustrated customers, who continually hear about super-fast speeds being offered elsewhere.

Viasat sets a new standard for “internet anywhere” by powering the fastest satellite internet ever offered in the U.S. With download speeds between 25 and 100 Mbps, Viasat lets subscribers meet all of their home and business broadband needs thanks to service that’s up to 10 times faster than typical DSL. Even better, Viasat now offers unlimited data plans across the country.

If you’re in an area not well served by other technologies, think about the new Viasat Internet plans as a true broadband option now available. And compare what we offer to your other choices:

Today’s Viasat Internet combines the reliable broadband speed and unlimited data needed for watching streaming video over services like Netflix. Another must-have of internet service is to make sure that subscribers can use all of their devices without worrying about a slowdown in service quality.

You may have heard about higher latency being an issue with satellite internet. While it’s true that some types of online games or VPN services are affected by higher latency, we’ve made great strides to offset the more common impacts on webpage loading times. With Viasat Web Acceleration service, predictive intelligence makes for snappy page loading far beyond satellite internet of the past. Basically, Viasat’s web acceleration servers use innovative technology to accurately “guess” what subscribers need on the web and then have those things ready to go to accelerate load times — even before receiving a specific command from a Viasat satellite.

So we hope anyone suffering from slow internet speeds now know they do have a choice. If you’re outside of high-speed cable or fiber zones, you shouldn’t have to roll the dice or wait years for the right service to support your internet needs.

Reliable, high-speed satellite service powered by Viasat can get the job done from just about anywhere.