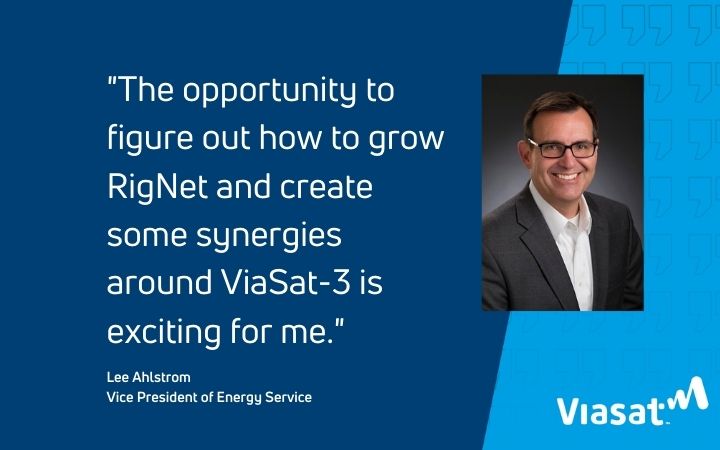 When RigNet initially approached Lee Ahlstrom about coming to work for them, he wasn’t interested. Its technology and employees changed his mind.

Ahlstrom, who joined RigNet in 2018 as Chief Financial Officer, had spent the last half of his career working on the drilling side of the oil and gas industry.

“Drilling is a really hard business, and I thought being a commodity supplier to a drilling company has got to be even worse,” he said. “But RigNet had this fantastic, energized, very techy team. They had begun transforming the company from just a provider of bits to moving up the technology stack by providing some new and innovative solutions.

“The strategy was to add new capabilities over the top of the existing managed communications services to allow customers to optimize financial and operational performance through machine learning while protecting the network from cyberattacks. All of those things made sense to me.”

So Ahlstrom made the leap.

“I thought it was a great opportunity to take my experience and bring it to a team that’s very experienced in technology, but less so in oil and gas,” he said. “They talked me into coming on board, and it’s been a great ride.”

Ahlstrom – now Viasat’s Vice President of Energy Services – has been part of several reorganizations and acquisitions during his years in the oil and gas industry. This one, he says, already feels different.

“Normally when you talk about an acquisition and mention the word ‘synergy,’ people are talking about costs and that usually means employees are losing their jobs,” he said. “This is the opposite.  We’re focused on, ‘How do we take what you do and what we do and make it bigger and better? I think there are a lot of really interesting and exciting things that are already being pursued, and we’re only a few weeks into it.”

Viasat closed the transaction with Houston-based RigNet on April 30. The company provides managed-communications services, software applications, internet of things, and advanced machine learning in a variety of industries including energy, maritime, government and mining. RigNet offers customers a host of sophisticated telecommunications and networking solutions such as machine-learning analytics, cybersecurity and real-time monitoring apps, with a core goal of bringing connectivity to hard-to-reach locations. It has more than 650 employees, half based in overseas countries where ViaSat-3 will soon provide coverage.

With the initial launch of the three-satellite global constellation on the horizon, Ahlstrom said the timing for the acquisition was right.

“RigNet coming in as a pretty significant provider of bandwidth to our customers in an already established industry made, I think, a lot of logic for Viasat,” he said. “And given the potential for us to be a part of a larger company with a bigger balance sheet and a very exciting future, the conversation made sense for us and our shareholders.”

A career of change and growth

For Ahlstrom, this is the continuation of a career path marked by unexpected turns. When he graduated from the University of Delaware with a master’s degree in mechanical engineering in 1991, the U.S. was slowly emerging from a recession. Job prospects were slim. While Ahlstrom hadn’t planned to work in oil and gas, Exxon made him an offer.

“The oil and gas industry is certainly not something I thought I’d get involved in growing up,” he said. “It’s really volatile. But there may be no other business sector that is so linked to the global economy. There’s no significant international decision that doesn’t somehow involve the industry. Energy absolutely impacts everyone every day, whether they know it or not.”

In his nearly three decades in the industry, Ahlstrom has come to understand and appreciate the ubiquitous nature of petroleum products – which are part of everything from pens and sneakers to home heating oil and gasoline. And he’s seen how his work can guide and influence the industry.

After accepting Exxon’s offer in the early ’90s, Ahlstrom moved to Houston, closer to the company’s Dallas-area headquarters, where he still lives. He worked as an engineer on offshore platforms, eventually shifting to the well-drilling side of the business.

In his late 20s, he briefly worked for McKinsey & Company, a global management consulting company to some of the world's most influential businesses. But by then, Ahlstrom was married and a new father, and escalating work demands conflicted with his family life. So he returned to the oil and gas industry – this time working for Unocal, a major petroleum explorer based in California. While there, he transitioned into investor relations.

“They wanted somebody who could speak to the street from a technical standpoint: Why are we drilling this well? What’s the development plan for Indonesia?” he said. “That’s where I came in.”

Ahlstrom eventually worked as senior vice president of strategic development at Noble Drilling, where in 2013 he helped split the company in half to form Paragon Offshore.

When petroleum prices plunged in 2014, Paragon was forced into a restructuring. Mid-way through the process, Ahlstrom was asked by the board of directors to step in as its CFO. He helped the company emerge from bankruptcy and sell the company nine months later. In 2018, RigNet reached out.

RigNet brings changes to the industry

During his time with RigNet, Ahlstrom has seen how the company can bring real and needed change to the oil and gas industry. Intelie Live, RigNet’s sophisticated, real-time operational technology, helps companies efficiently manage their resources.

“Oil and gas definitely gets a bad rap on the environment and other fronts, but that’s one of the things we bring to the table with Intelie,” he said. “It’s already helping companies like Pepsi monitor their waste management in Frito-Lay plants in Latin and South America by showing them how they can save electricity without compromising food quality.

“The offshore industry is starting to figure out how to become greener, too. There are good stories happening that don’t always get talked about because we’re easy to beat up.  But energy companies like ExxonMobil, Total, bp, and Shell, as well as drilling contractors and service providers, are all working towards becoming more environmentally responsible.  We can help by providing capabilities they’ve never had before.”

RigNet is also working to provide large offshore wind farms with Wi-Fi and other vital communications systems, an aspect of the business Ahlstrom expects will grow.

“We’re picking up a lot more opportunities in the wind-farm space and believe we’re very well positioned to win a number of jobs,” said Ahlstrom, who looks forward to continuing that work with Viasat.

“The opportunity to figure out how to grow RigNet and create some synergies around ViaSat-3 is exciting for me,” he said. “I think it also creates a lot of opportunity for our employees in terms of career and personal development.

“And I think we bring some really interesting things to Viasat in terms of our international flavor. Ninety percent of Viasat’s revenue before us was U.S.-based. With the RigNet and EBI acquisitions, combined with the coverage offered by ViaSat-3, Viasat be a truly global operating company.”