A move from Hong Kong proved pivotal for a Viasat engineering manager in Carlsbad, CA 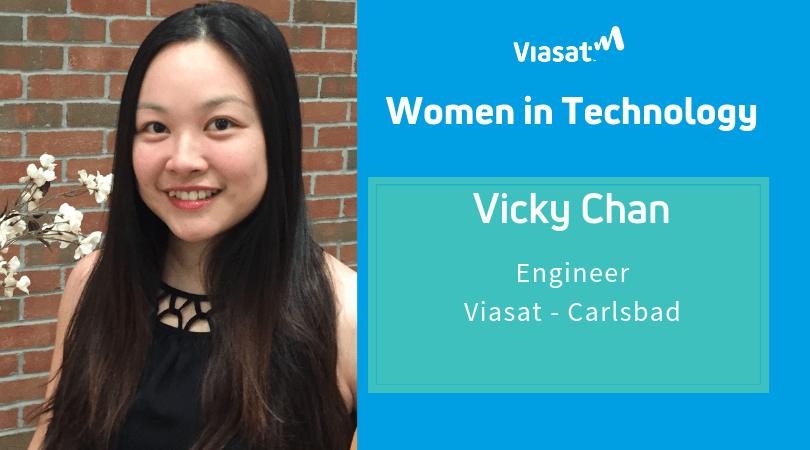 A move from Hong Kong proved pivotal for engineering manager in Carlsbad, CA

Viasat engineer Vicky Chan was 13 when she and her brother immigrated to the United States, leaving their parents behind in Hong Kong. The two believed their sacrifice would ensure a better future for their children.

Chan did not let them down.

She earned a bachelor’s degree at Cornell, a master’s at Northeastern and is today pursuing a management degree from the Harvard Extension School. That’s in addition to working as a software engineer, product owner and systems architect at Viasat – and parenting a 9-year-old son, Marcus.

“I think we all agree that I wouldn’t have had the opportunity to go to a school like Cornell and all the things that followed if I didn’t come here,” Chan said. “Hong Kong is much more competitive, and I didn’t stand a chance.

“It was tough in the beginning. I did have the support of relatives I lived with in Massachusetts, but it was hard to not have my parents around when I was 13. I grew up a lot in those years and learned to be independent.”

She also discovered what would become her life’s work when she took her first programming course in high school.

“I just fell in love with it,” she said. “It felt like time just flew when I was doing programming work. I could sit at the computer for hours, and it was totally satisfying to me.

“I really enjoy the analytical part. For every problem, it’s new and it’s different; I find that very challenging and satisfying. That’s why I decided to major in computer science.”

Going with the flow

Chan recognized that feeling later in life when she first heard the term “flow,” a positive, effortless mental state she’s found while pursuing her hobby of painting and while solving challenges at Viasat. “They both require a level of creativity.”

“I would say I’m also in ‘the flow’ when I’m thinking through a problem and envisioning potential solutions,” she said. “For example, we had a problem of allowing all the DevOps teams to make changes rapidly without jeopardizing the stability of the system. So I came up with the idea of a tool/service that would allow teams to orchestrate and coordinate changes, backed by an intelligent scheduling algorithm that automatically determines how risky the changes are.

“I eventually got buy-in to build a team to work on such a tool, and it’s being used by hundreds of employees today.”

Being able to come up with creative solutions to important issues and lead teams to build successful products keep Chan feeling challenged and happy with her work.

She started at Viasat’s Massachusetts site in 2007, coming from stints at Hewlett-Packard and Analog Devices. Immediately, she liked the intimacy of Viasat’s relatively small Massachusetts office, then located in Quincy and since relocated to Boston.

Chan started off with software automation, then transitioned to web acceleration product development, which she later led. In that role, she promoted the then-novel idea of Continuous Integration and Continuous Deployment (CI/CD) and DevOps – software development practices that speed processes while increasing quality. Google, WordPress, Etsy, Tesla, Adobe and many other companies follow the same practices.

The foundation of the practices is the ability to deliver applications and services at high velocity.

“In the old days, software releases could be done once or twice a year where development and operations are ‘siloed.’ CI/CD enables rapid feedback on code changes and rapid delivery. DevOps is about removing that barrier and having teams own their applications and services from cradle-to-grave.”

For Chan, it’s been thrilling to see the change move throughout the company.

“Even though things like CI/CD and DevOps are really disruptive in terms of process and how engineers do their daily work, it’s because Viasat is so open to different ideas that we were able to experiment and eventually push it through for the entire company,” she said. “There are a lot of people across the company who made that successful, and it’s been a real accomplishment.”

Opportunities for large-scale changes like those are just one of the reasons Chan says she loves working at Viasat. She’s also transitioned to a management role, a position that initially seemed at odds with her typically introverted personality.

“I’m a little soft spoken, but I want to be authentic that way,” she said. “From my perspective as a leader, I don’t want to necessarily give directions or command. My take is that I’m there to guide the team and ask the right questions so the team can come up with the best answers. The teams at Viasat are so highly motivated, proactive and want to be able to speak their minds. In that sense, I think it’s good to have a leader who’s more introverted.”

As a single mother, she’s also a leader at home.

“It’s great to be able to have a flexible schedule and work from home at times, and my son is optimistic and adaptable, so I think he’s getting used to the rhythm,” she said.

Marcus also has a budding interest in engineering, and will attend a summer youth programming camp.

Today, Chan and her parents are again living in the same country. They retired and moved to the U.S. after Marcus was born.

Though she’s never pressed them on the question, Chan believes they’re proud of all that she’s accomplished.

“They’re not very vocal about those things; perhaps that’s a cultural thing, but I think they’re glad I turned out OK,” she said. “It’s bittersweet looking back on when we first came here, but all they did shows how much they cared. Oh, how I love them.”