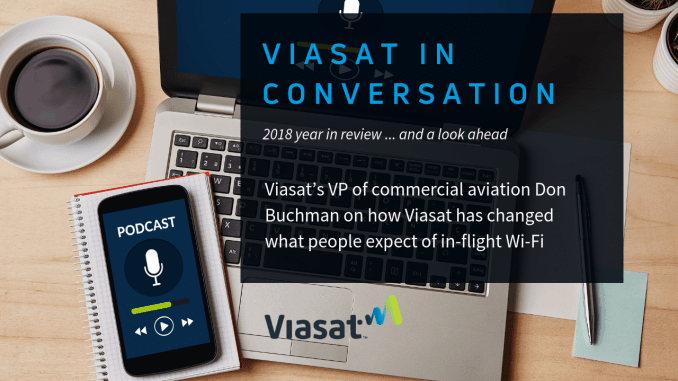 Will 2018 be remembered as the year when passengers finally started expecting in-flight internet to actually be … good? That’s one of the biggest trends Don Buchman, vice president and general manager of Viasat’s commercial aviation business, highlights in the latest episode of the Viasat podcast. “We’ve seen the shift,” Buchman tells Chris Phillips, head of corporate communications and PR at Viasat. “Everyone expects (great) internet everywhere they go, and we’re delivering it to more people. Throughout the past year, Viasat’s exceptional satellite capacity allowed us to create transformational in-flight experiences around the world. From a seamless business class experience on French airline La Compagnie to livestreaming the World Cup to dozens of cheering El Al passengers high above Tel Aviv, we continued to spark creative new possibilities for Wi-Fi at 35,000 feet. “I think now, the expectation is, there’s a new bar,” Buchman says. “We are the bar.” Another of the year’s big trends: added value. Whether it was livestreaming a Willie Nelson concert to fans aboard American Airlines, or the ongoing success of JetBlue’s free Fly-Fi service provided by Viasat, we’ve shown how going beyond a simple data connection can build buzz and inspire customer loyalty. Some other topics discussed in this episode include:

*Note: Apps will have some delay before episode is available