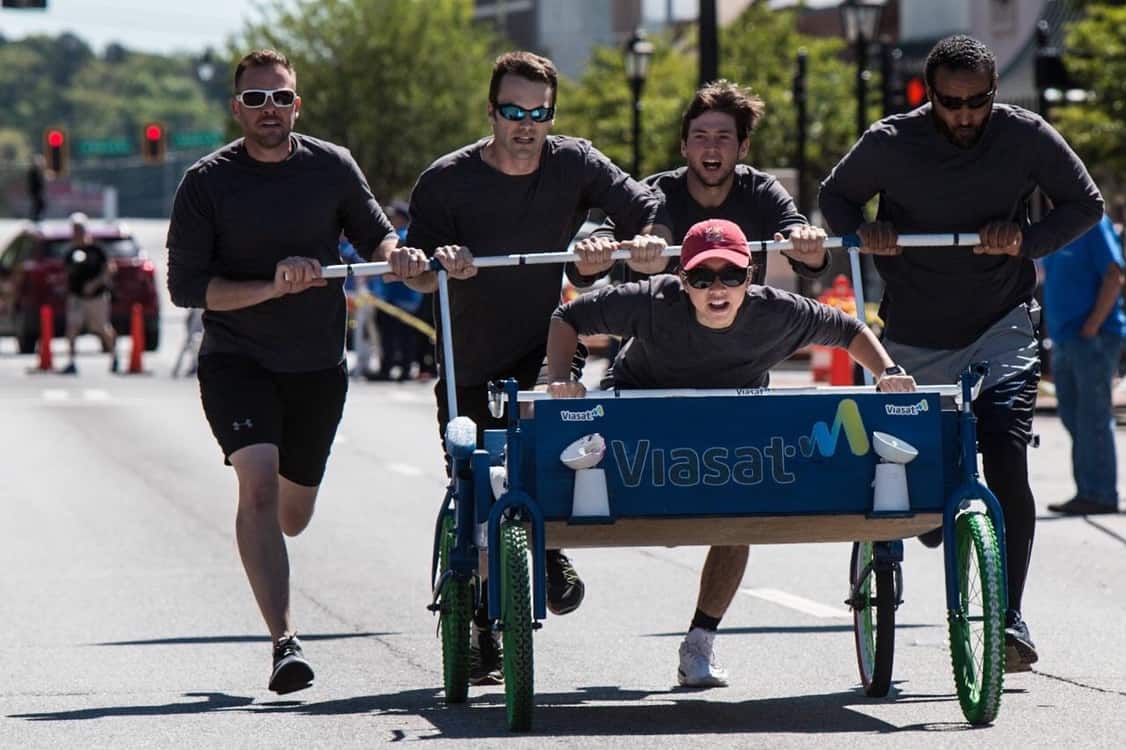 When Gigi Ross started as Viasat’s Social Media Manager in 2017, she had a daunting challenge: how to showcase Viasat as a global company, with employees from 37 international campuses, on social media.

Part of her solution was to create the Photo Ambassador Program – recruiting a select group of employees whose photographs from Viasat campuses around the world are used to tell the company story.

The program has been a success on every score – including some that were unanticipated. In addition to upping the company’s Instagram profile, and generating engagement rates well above the industry average, it’s boosted recruitment efforts.

“The results have been far beyond what I ever could have imagined,” Ross said. “A number of employees who recently joined the company talked about how our Instagram photos gave them a great sense of what our company culture is like. It is having an impact among candidates who are considering Viasat as a place of employment, which is a benefit we didn’t expect.”

Several of the 45 photo ambassadors said participation in the program has also had unexpected perks: creating a stronger sense of company belonging, and a feeling of camaraderie among their fellow ambassadors worldwide.

“I feel more connected to the company now,” said Logan Halloran, an ambassador and wireless services dispatcher on the College Station, Texas campus. “So I think you can assume any employees who go to our Instagram feel more connected, too.”

Those positive feelings about the program extend all the way up the line to Ross.

“The program is the part of my job I find the most rewarding and fulfilling,” she said. “I love being able to work with so many inspiring and creative people around the company, touching so many aspects of the business and seeing people engage with our brand. Their photos reflect how much pride people have in our campuses, our culture and the people they work with.”

Ross came to Viasat from a larger, multinational corporation, where she was also charged with social media content management. It was there that she got the idea for a photo ambassador program, but the concept never came to fruition.

At Viasat, she saw the opportunity to try again. The timing was perfect.

“With our global expansion, it was the right time to do this program,” she said. “There was also a real thirst for it; I heard feedback from our campuses outside of our Carlsbad headquarters that they wanted more representation on social media.”

Ross reached out to some employees she knew who enjoyed taking photographs, and also sent an email seeking volunteers.

“When I joined Viasat, I immediately sensed that employee pride was an untapped resource,” she said.

In its first full year, her 45 ambassadors – who represent almost every one of Viasat’s campuses – have submitted over 1,400 photos. Of those, 10 percent have been featured on the company’s main Instagram site. Hundreds more are featured on weekly Instagram stories.

The ambassadors are a mix of professional photographers and iPhone hobbyists.

And while they’re provided with guidelines, they also have freedom to be creative. To inspire them further and keep the program fresh, Ross provides regular photo suggestions and challenges, sends a monthly newsletter, and recently hosted an awards ceremony to recognize the group’s substantial efforts.

“My goal was to get 20 to 30 photos a month; I get anywhere from 100 to 200 photos a month,” she said. “What we’ve achieved in terms of content is many times beyond my initial expectations.”

For photo ambassador Allison Choate, who works as a facilities assistant on the Duluth, Ga. campus, it’s been a pleasant and natural extension of her job.

“I’m walking the campus anyway and involved in a lot of activities here in Duluth,” she said. “And now that people know I’m an ambassador, I get invited to even more things.

“It’s also opened my eyes to look for new things – a neat angle or a piece of equipment I might not otherwise see. I’m learning things I may not have, and seeing more of the technology side of what we do – which is a neat perk as well. And people here think it’s fun to see their campus showcased.”

In College Station, Halloran gets to indulge his lifelong love of photography.

“This is the first opportunity I’ve ever had to exercise that creative muscle in any kind of professional environment where it would actually be reviewed and appreciated,” he said.

While he hopes to someday travel to some of Viasat’s other campuses, the ambassador program gives him a window into the cultures of photo ambassadors in other countries.

“At the very least, I get to see the world through their eyes,” he said.

For Costello, it also provides a common connection to other employees.

“Among the ambassadors, nobody’s looking at what somebody’s role or title is in the company; it’s just a friendly communication,” she said.

Ross has heard similar comments from her volunteers.

“One of our ambassadors said it feels good to be part of something beyond her day job, to be part of a group of people who all have something in common,” she said. “That’s one of the benefits of the program I didn’t anticipate. I think it’s very palpable to them they are doing something to bridge the culture across campuses.”

As Viasat continues to expand globally, the photo ambassador program will grow with it — a prospect Ross said will be both challenging and rewarding.

“I’m just really excited for what the future holds for 2020 and beyond,” she said. “I think we’re going to see a whole new level of creativity and quality in the photos this year. I can’t wait to see what happens.”