Out There: In the Colorado mountains, Viasat offers a critical link 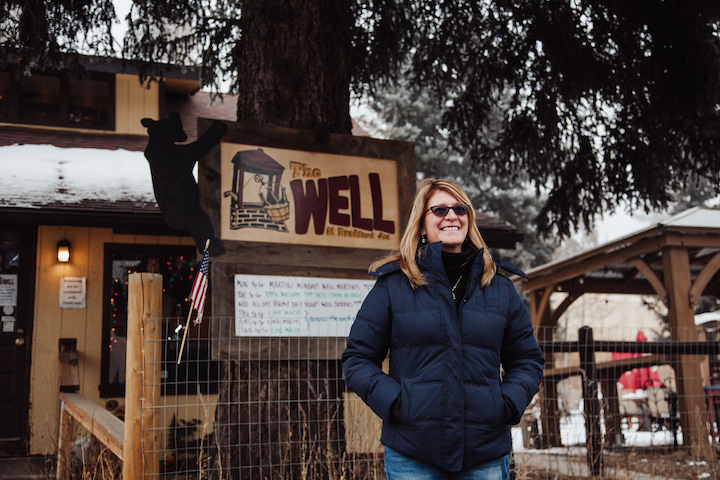 Leslie Murray has found Viasat is the right service for both her home and her business in the small community in the mountains outside Denver.

Out There is a series of stories about how Viasat customers use our service to stay online in some of the more remote areas of the world.

For Viasat subscriber Leslie Murray, “community” is about much more than a place to live. Murray moved with her husband and three children to the small town of Conifer, CO in 2009. She fell instantly for its scenic beauty. Soon after, she also fell for its people.

“Everybody is super friendly, and the community here is very supportive,” she said. “But they’re not nosy. It’s a really nice balance.”

Since her arrival, Murray has learned repeatedly just how supportive her community is. It’s cemented her bond with the people she now calls both friends and customers, and deepened her certainty that this is where she belongs.

Having reliable, high-speed internet enhances the quality of her life here. She uses Viasat Internet at both her cabin and her business – a neighborhood pub just outside Conifer.

“Viasat has been absolutely wonderful,” she said. “I use internet almost the entire time I’m home. Even if I’m not at my computer, I always have music streaming. And at work, it keeps my computers, payment terminals, and printers all working — everything I need to keep my business running smoothly.”

Conifer is an unincorporated town in the foothills southwest of Denver. To passersby, it’s a wide spot in the road: a scattering of homes and businesses along U.S. 285 — one of the routes Front Rangers take for weekend escapes to the mountains. To those who live there, it’s a refuge from the urban congestion of Denver, an active community of outdoor lovers who embrace the mountain lifestyle and those who share it.

Most, like Murray, are transplants from elsewhere who’ve chosen to make Conifer home. They’re bonded not by common history, but their passion for the place.

Murray joined the community in 2009. A native of the Midwest, she moved to Colorado in the 1980s. She later married Tony Robertazzi, gaining not only a husband but three stepsons.

“It was instant family,” she said. “We were extremely happy. I was very close to the boys, and Tony was my best friend.”

The Well at Bradford Junction in Conifer, CO

After the new family moved to Conifer, Murray opened a garden supply store, later expanding it to include a wine-tasting room. It became a place they could share with their existing friends and welcome new ones.

“Tony and I really liked to socialize,” she said. “We used to throw parties at our home, and I thought it would be great to make a living doing that.”

The tasting room was so successful, Murray believed the area could support a full-service neighborhood pub. But the gardening side of her business had fallen off. She was struggling just to stay afloat, much less to purchase the liquor license she’d need to open a bar.

That was the first of three times her new neighbors rallied around her.

“My friends and customers said, ‘You’re not going to close. We’re going to do what it takes to help you get your liquor license,’” Murray said.

They organized a silent auction with donated items. Bands that had performed at the wine-tasting room provided free entertainment.

“We raised enough money not only for my liquor license, but my first liquor order, too,” Murray said. “It was amazing. In the years since, I’ve seen this community do these kinds of things repeatedly. Not only for me, but for anyone who needs help.”

Murray opened The Well at Bradford Junction pub in a converted historic home in 2017. Since then, it has become a fixture in the area – a true community gathering place. The Well quickly gained a following not only with locals, but hikers, bikers, drivers passing along the U.S. 285 corridor and, of all things, Wisconsin football fans.

The Well is listed on PackersEverywhere.com as an official Green Bay Packers bar, and transplanted Midwesterners jam the place on game days. Murray hosted bands a couple days each week, and she opened the doors for community potlucks on holidays.

The community’s support for both The Well and Murray grew even stronger when tragedy struck.

In 2018, Robertazzi was diagnosed with cancer, and the family was deluged with medical bills. Once again, the people of Conifer rallied around them, holding a fundraiser that kept the family afloat until Robertazzi qualified for Medicaid.

Robertazzi died on March 1, 2020 — the same day the first U.S. coronavirus death was confirmed. On March 16, Colorado Gov. Jared Polis mandated a stop to dining-in at restaurants and bars. Just days after it had hosted a robust celebration of Robertazzi’s life, The Well at Bradford Junction temporarily shut its doors.

In the aftermath of so much loss, Murray lapsed into depression. A Well staff member, whose fiancé had also passed away, came to Murray’s aid.

“She pulled me out of the gutter of despair,” she said. “She worked for tips to help me stay afloat, and was helpful in every way. Once they allowed carryout orders, we worked the business together. I built a pizza kitchen outside so we could serve food outdoors, and people were tipping gobs of money. Things started to get better.”

When Murray moved to this rustic home outside of town, she found Viasat ideal for internet connectivity as well as VoIP phone service.

Last year, Murray moved from the large house she’d shared with her husband into a remote cabin in the woods. The home, hand-built by its original owner and decorated throughout with intricate wood carvings, is Murray’s sanctuary. The only thing it lacked was an internet connection.

“It wasn’t until I moved into the cabin and started seeking options for internet that I found Viasat. I had never heard of it,” she said. “Before then, I’d had fiber internet at my business and another satellite internet provider at our house. Both were horrible.

“I did my research, and I felt Viasat had the most favorable reviews of any that were out there.”

Her research paid off. Murray subscribed to the residential Platinum plan in August 2020.

“It’s been over a year since it was installed and I haven’t had any issues,” she said. “Viasat is my only source of anything. I don’t have satellite TV or even a landline phone.”

Murray discovered another benefit to satellite internet: In areas where phone service is spotty or non-existent, Voice over Internet Protocol (VoIP) phone service from Viasat enables that critical connection via satellite.

“I use Viasat to do Wi-Fi calling. I’m constantly booking bands and uploading events at the bar to social media. I download movies. And if I’m not watching a movie, I always have music streaming in my home.”

The service has worked so well, Murray decided to have it installed it at her pub, too, replacing the inconsistent fiber service in her area she’d had for years.

In one notable instance during the summer of 2021, Murray hosted a poker run to benefit veterans. About 150 bikers visited the pub that day.

“Several of the cards we were given were declined. But by the time we knew it, those customers were long gone. It was devastating for the business.”

Since Murray installed Viasat at the pub in fall 2021, her business has had no disruptions.

“There just hasn’t been any problem,” she said. “I even took out the landline at the bar and just use Viasat Wi-Fi calling now.”

“I always refer them to Viasat,” she said.