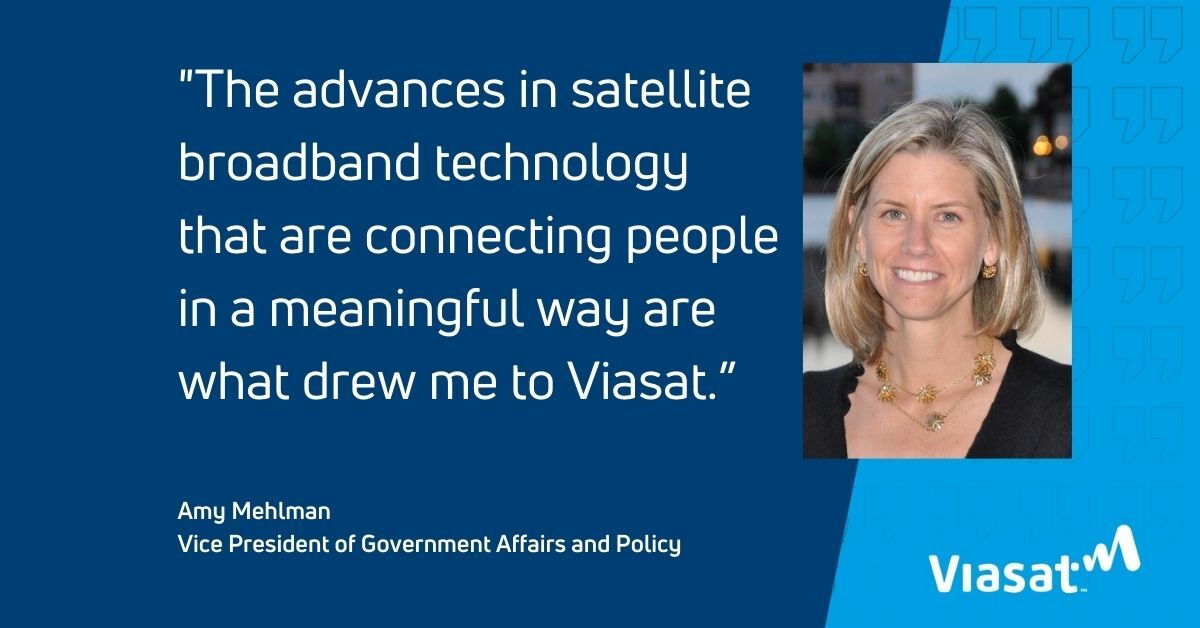 As part of International Women’s Day, this month we’re featuring the stories of some of our employees here at Viasat. Here, we catch up with Amy Mehlman, Vice President of Government Affairs and Policy.

Amy Mehlman has lived and worked in the Washington, D.C. area her whole life. When the self-described policy geek joined Viasat in 2020, she brought with her a wealth of knowledge and experience about policy and regulation specific to the telecommunications industry — and satellite in particular.

Mehlman says satellite intrigues her because of the power it has to connect the unconnected across the globe. While other internet service providers require either direct cable or fiber to a home or business — or proximity to a cell tower — satellite can reach almost anywhere without that extensive infrastructure. That often means a much less expensive way to connect people, particularly in areas where other ISPs won’t provide service due to the cost.

“Viasat is on the cutting edge in this era of satellite technology evolution,” she says. “Many areas remain unconnected, and satellite has been doing a great deal to fill those gaps. The advances in satellite broadband technology that are connecting people in a meaningful way are what drew me to Viasat.”

While Viasat’s engineers work on creating the satellites, ground network and end-user terminals, the Government Affairs team focuses on educating regulators and policymakers about the power of satellite to realize the goals most countries have to expand internet access and adoption.

“We’re constantly in contact with regulators around the world to ensure they understand the intersection of policy and innovation from an industry perspective,” Mehlman says over a Zoom call from her home in Bethesda, MD. “There are a lot of competing factors, whether it’s about spectrum allocation, minimizing risks of collisions in space or other standards that need to be in place to ensure balance.”

Mehlman and the other members of the team have their finger on the pulse of what government and industry players are doing, not just in the U.S. with agencies like the Federal Communications Commission or the Department of Commerce, but similar governmental entities around the world. That includes the International Telecommunication Union (ITU), the United Nations agency that helps coordinate information and communication technologies policy on a global level.

“All that work is to ensure there are clear rules of the road — lanes and speed limits everyone understands,” she says.

The ITU, she says, has programs in place to encourage more women to pursue careers in telecommunications, and she cites the head of the ITU’s development division, Doreen Bogdan-Martin, as a driving force.

“She does this every day by promoting education and access to the internet,” Mehlman says. “And Viasat has been supportive of her and her policies to encourage women toward STEM fields, and to get involved with the critical work around connecting the world.”

Mehlman notes that satellite is a huge piece of the puzzle, given that many areas that need help the most aren’t economically attractive to most ISPs.

“Women in the developing world can benefit enormously when satellite broadband becomes available to them. The key to women’s economic empowerment is education, and online learning is increasingly essential to deliver it,” she says. “Distance learning and telemedicine capabilities are hugely important in many of the communities we serve, and you’ve got to have a robust connection for all of that.”

Mehlman is careful to distinguish between simple connectivity and “meaningful connectivity,” by which she means internet service capable of running modern apps that require more speed and bandwidth.

“COVID really shined a bright light on this issue with online schooling, remote work, accessing essential government services and online job searching,” Mehlman says. “It all takes bandwidth, and it’s why Viasat has invested in ViaSat-3 — a trio of satellites with expected capabilities of over 1 terabit per second each to cover the globe.”

And it all ties back to the work she does every day.

“I love what I do,” she says. “We’re on the precipice of another tech explosion in this New Space era, and if I can be a small part of connecting the world, the hard work is well worth it.”

It’s a big effort that requires many hands in industry and government, she says.

“It’s women, it’s men, it’s a huge diversity of voices from all races, ethnicities, and genders — from a policy and personal perspective, more experiences and world views lead to better decisions. And, women’s voices need to shine more moving forward — we’ve got to see more women in leadership positions in this industry.”

For her part, Mehlman says the promise of global connectivity is driven in large part by educating regulators and spreading the word about the capabilities of satellite whether to peoples’ homes, on planes or buses around the world.

“We are here to connect you, and I’m excited to be a part of it,” she says. “We are at an incredible moment in history when a transformational technology is both mature enough to catalyze real change and be within reach of all citizens. Our work gives policy makers the tools and information they need to truly improve how people work, live, play and learn. That’s pretty exciting.”