A purpose-filled life: Viasat's Nigel Nurse continuing his commitment of service to the military and future leaders

The Navy veteran is committed to ensuring U.S. warfighters have the tools they need to give them a continuous edge in battle 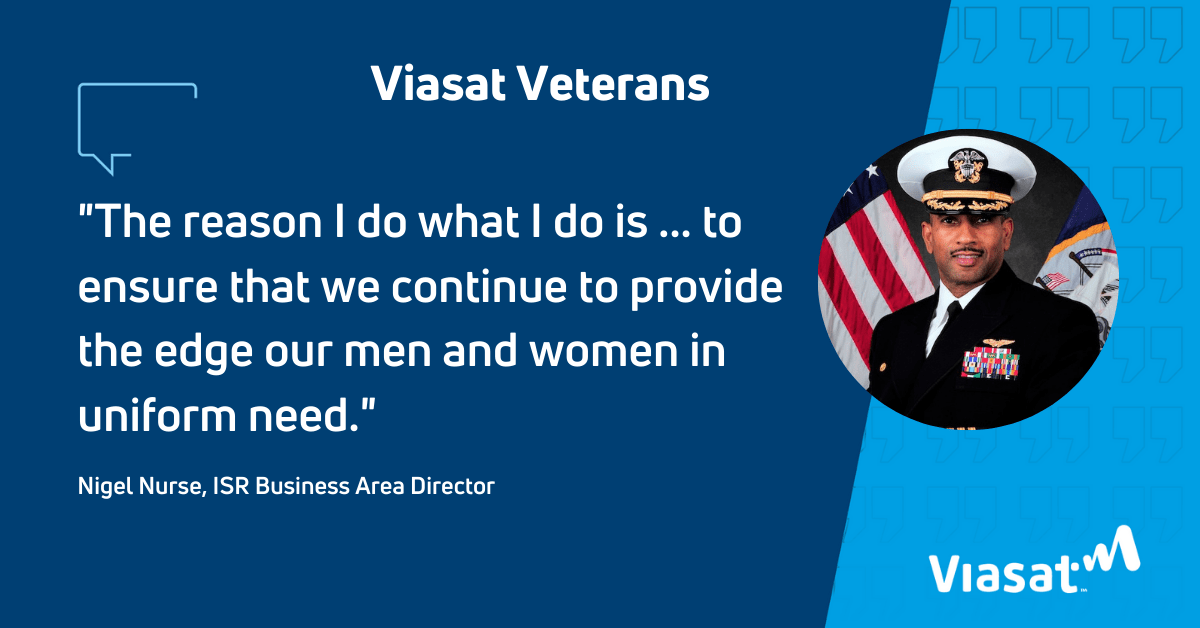 Nigel Nurse has always lived his life with purpose.

As Business Area Director of Broadband Intelligence, Surveillance and Reconnaissance (ISR) at Viasat, Nigel is committed to ensuring U.S. warfighters have the tools they need to give them a continuous edge in battle. He’s also devoted to helping develop the company’s future leaders, using the model he practiced throughout his 27-year military career.

Nurse first discovered a sense of purpose at the age of 7. At an age when most children are focused on playing, Nigel took an interest in his family’s World Book encyclopedias. He was fascinated by what he learned in the “S” Volume.

“There was this well-laid out space section that really captured my imagination,” said Nurse, who spent most of his childhood in Southern California. “From that time on until 2003 – the year I interviewed in Houston – I was singularly focused on becoming a NASA astronaut.

“That dream set the tone for taking math, science and engineering classes from a very young age. I was making conscious decisions with respect to course work.”

Those decisions paid off. He graduated from the University of Southern California with a bachelor’s degree in aerospace engineering. He also has three master’s degrees in aeronautical engineering, systems engineering management and business administration.

Following the footsteps of other astronauts Nurse admired, he went on to become a naval aviator and was selected to attend the elite United States Naval Test Pilot School (TPS).  He also earned the recognition of ‘Test NFO of the Year’ in his follow-on test tour after completion of the TPS.

That intense focus led Nurse to within a hair’s breadth of achieving his lifelong dream. He interviewed with NASA for its Astronaut Candidate Class in 2003, and while he met the steep qualifications, he was not selected due to a torn disc he sustained while weightlifting – an injury that could become magnified in space.

“It’s hard to spend your life in pursuit of something that you’re not successful at,” he said. “But you have to let those things go. The fact that I was able to stand out among my peers in a super-competitive environment – even as a Black man in the largely white population of naval aviation – to me was a tremendous success.”

Nigel’s successes continued throughout his military service. While serving as a Navy aeronautical engineer duty officer, he was promoted to the rank of captain and was selected for a major shore command as the program manager for the Airborne & Maritime/Fixed Station Joint Tactical Radio System.

He was also chosen for a fellowship with the elite consulting firm McKinsey & Company, which Nurse described as “probably the equivalent of four years as far as personal growth.” It more than met his lifelong desire for constant challenge and impactful work through service.

Although Nigel retired from the Navy in 2014, he did not retire from serving his country, fellow military members and future leaders.

He continued his purpose when he joined Viasat later that same year. Nurse was already familiar with Viasat’s products from his time in the military and knew several executives who’d also previously served.

His role at Viasat turned out to be ideal for him because he has a thorough understanding of ISR and the military kinetic strike process. Nurse’s firsthand experience of this process came from the six months he served in Iraq on a volunteer deployment, using ISR to help the Air Force support armed forces on the ground.

“I had a good understanding of the busines model from the user perspective, not just the perspective of the cockpit,” he said. “I understood the process from start to finish with respect to the services and products we provide.”

Those experiences also give him a unique understanding of how vital those services and products are.

“The reason I do what I do is not to earn a paycheck,” he said. “It’s to ensure that we continue to provide the edge our men and women in uniform need and ensure they win any engagement the government asks them to conduct.”

Nurse also serves Viasat as a mentor, a volunteer, and through his work with future leaders of the company.

In retrospect, Nurse realizes the drive that began for him in elementary school was uncommon.

“Now that I have kids, I see just how rare it is,” Nurse said, adding he’s also since learned to readjust his expectations and relax more.

When he’s not working, Nigel and his wife enjoy traveling, working out, being outdoors, and spending time with their four children.