As work on ViaSat-3 and other projects continues, employees look forward to again working under one roof

Viasat’s Germantown, Maryland office is small but mighty. Its 150 employees are involved in multiple aspects of the company’s business – from the ViaSat-3 ground network and defense programs to government mobility and in-flight Wi-Fi.

And for its relatively small staff, working in close proximity creates a camaraderie that is not only pleasant but good for business.

Growth in the past few years temporarily divided the Germantown crew into two buildings, a fact that’s soon to change. Viasat broke ground March 5 on a new structure that will bring the team back under one roof – with room to grow.

“To again be in the same space, to be able to collaborate, to feel that synergy when you walk down the corridors, that will be good for everyone,” said product manager Huma Hakim. “I think people miss that, and they’re really excited to get back together.”

The new office is expected to open in the summer of 2020.

The 3-story, 97,000-square foot building will have room for 185 employees. It includes a two-story parking garage, Roast House, café, workout area with showers and lockers, game room and outdoor barbecue and game area.

It also includes room for growth. Space on the third floor could accommodate another 60 employees, and plans for a 20,000-square-foot addition are preapproved when the space is needed.

The site is about a mile from the current Germantown offices. Viasat is among the first projects under way in the mixed-use development near I-270 and the Germantown Town Center. 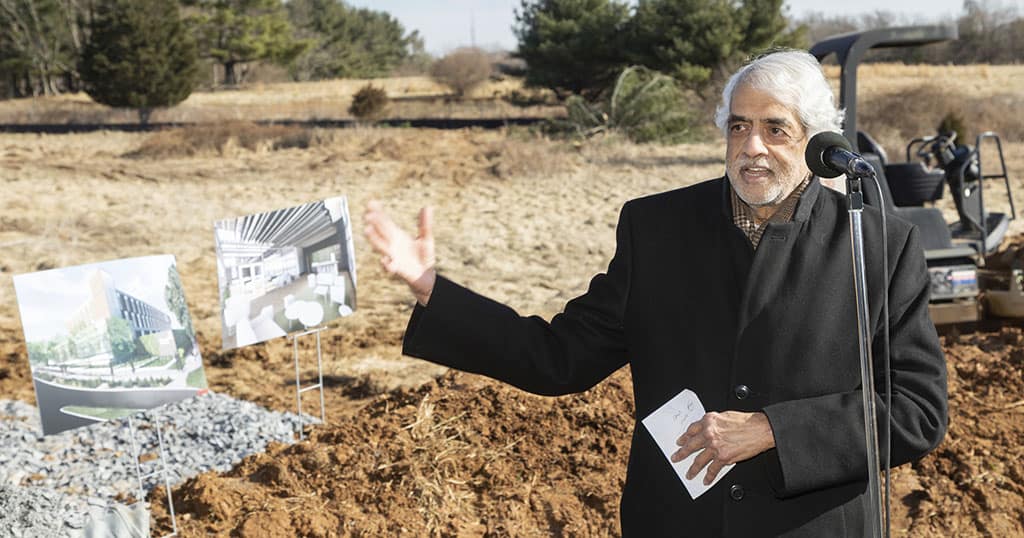 Vice president/general manager Prakash Chitre shows some of the renderings of what the new Viasat facility in Germantown, MD will look like when complete.

The new building is a milestone among many in the Germantown office’s history. It began with the 1963 creation of the Communications Satellite Corporation (COMSAT), a federally funded company tasked with developing a global satellite communications system.

COMSAT Laboratories, the division Viasat bought in 2001, was the COMSAT corporation’s research and development arm. Its scientists and engineers developed hundreds of patents applicable to global satellite communications.

COMSAT Corporation was later acquired by Lockheed Martin, and then COMSAT Labs was acquired by Viasat.

Vice president/general manager Prakash Chitre, who joined COMSAT Laboratories in 1980, said Viasat’s acquisition was “like a marriage made in heaven.”

COMSAT “was a technology driven organization; we thrived on challenging new R&D,” he said. “Viasat was a perfect fit for us.”

Chitre has witnessed many amazing technological developments throughout his career. But none he says are more impressive than the current development of the ViaSat-3 global constellation, which is poised to dramatically change the field of satellite communication.

In addition to its many other projects, the Germantown crew is working on the ViaSat-3 ground network and part of the satellite payload.

“There’s a lot of diversity in this one office, both in terms of the kind of people who work here and the projects we do,” Hakim said. “I’ve always thought that was our biggest strength.”

The new building will not only reunite the staff in one structure, but help recruit future employees.

“I really think people here would agree with me that there’s a synergy among our various groups,” Chitre said. “That kind of feeling, with the current separation of our groups, is really something I miss a lot. So we’re really looking forward to being together again.”

The new building will not only reunite the staff in one structure, but help recruit future employees.

“I really think people here would agree with me that there’s a synergy among our various groups,” Chitre said. “That kind of feeling, with the current separation of our groups, is really something I miss a lot. So we’re really looking forward to being together again.”

See all of Viasat's global locations