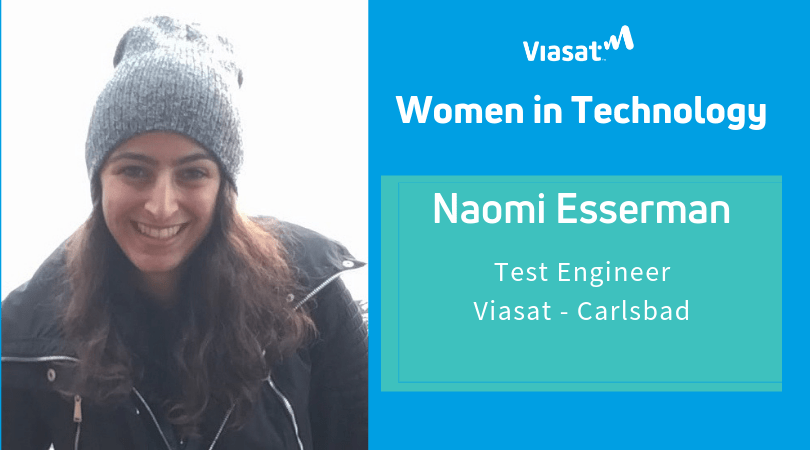 Most college students are used to stressing over their futures, as they try to pursue a major that will lead to a fulfilling career. Naomi Esserman, a systems test engineer at Viasat, was no different. When she began her studies at UCLA, she decided to major in electrical engineering without even really knowing what it meant.

In high school, Esserman said she always liked math and science classes, so she felt engineering was an obvious path. However, her small school didn’t have an engineering program, so she had to take a bit of a leap of faith. When she decided to go to UCLA, they accepted her as an electrical engineering student and automatically placed her into its Samueli School of Engineering.

When she began her classes, Esserman didn’t love her major. In fact, she even considered switching out of it. But when she began taking actual major-specific electrical engineering classes, her interest grew and she decided to stick with it.

“I like solving problems,” she said. “It started out as a random interest, but I really grew to love it..”

Back to the roots

Originally from San Diego, Esserman now enjoys working for a company close to the place she grew up in. Before she went to college, though, Esserman spent a gap year living in Israel, where she has a lot of family.

“My mom’s from there and two of my older sisters live there, so I had spent a lot of time growing up there,” she said. “That was a big consideration for me when graduating from college, to move back to Israel, and I ended up staying at Viasat. I just decided I was happy here. Viasat is a really good place and I like San Diego.”

Esserman knew she wanted to stay and work for Viasat because she was a part of its summer internship program in 2016. She said her experience made her feel that the company was a fun place to work, which was crucial to her as she was looking for jobs.

“Something that Viasat is known for is having a good work-life balance and trying to make work an enjoyable place to be,” she said.

When she started as an employee, Esserman worked in commercial mobility. After two years, she decided she was ready to try something different, so she joined the BBC (Broadband Connectivity) team, working on Viasat’s newer Brazil and China projects.

Working on new programs is exciting for Esserman, she said, because she feels like she’s building things from scratch rather than maintaining an already existing project. There is more of a learning curve, because the team has to decide whether things are feasible before they can implement a full network, she said. But Esserman enjoys thinking on the fly.

“Once I joined the team, I was given options on what I want to work on,” she said. “Their team covers a lot of things within Viasat, so I was brought on just as Brazil was picking up, and I was thrown into that, and I liked it.”

Esserman’s team is carrying out Viasat’s partnership with Telebras, Brazil's state-controlled public telecommunications company. The collaboration allows Viasat and Telebras to bring affordable and scalable broadband services to Brazil. The satellite is Telebras’s, Esserman said, and her team is helping to set up the ground network for the internet offered there.

The work is not the only part about Viasat that appeals to Esserman. Work friendships are important to her as well, which is why she and her friends started a new grads group for Viasat in 2017. The transition from college life to work life can be difficult, Esserman said, so having a community is crucial to making new graduates feel comfortable. Drawing from their Viasat internship experiences, Esserman and her friends helped plan happy hours, weekly game nights, volleyball tournaments, and hikes. Eventually, group members even formed metagroups devoted to different interests like climbing.

“The rate of people who leave their first job after a year or two is really high,”she said. “It can be easier for some young people to pick up and leave. Some new grads also don’t have families nearby, which is why it’s really important to help them build that community when they move here.”

For the near future, Esserman is moving forward with an open mentality. She said she has no concrete plans, but she hopes to continue growing and learning on her team at Viasat. At the end of the day, she just hopes that she will leave a positive mark on the world.

“Try to be a good person, try to help people, try to do some good in the world. Those are all things I think about a lot,” she said.