At its facility near Atlanta, Viasat builds large-aperture antennas up to 24 meters 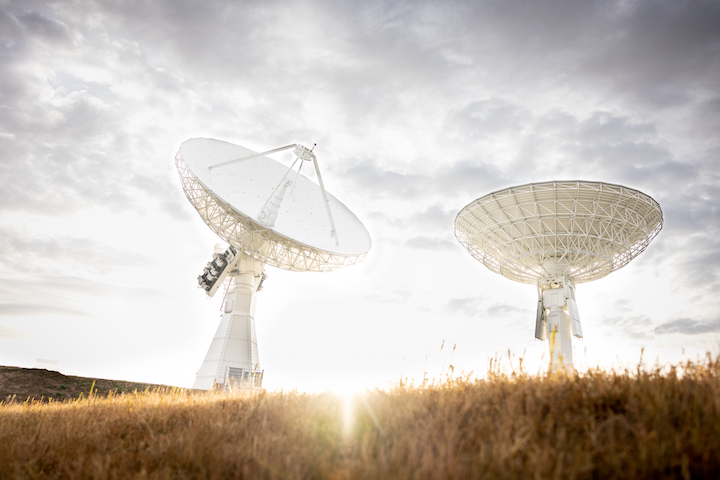 Seen here at our Duluth, GA facility are the 20-meter (left) and 24-meter antennas.

While many components of advanced technology continue to miniaturize, there’s one area where bigger is not only better — it’s essential. For communications reaching to the moon and back, the best antenna is one large enough to successfully capture signals from so far away. And with missions to the moon and Mars just around the corner for the U.S. and other spacefaring nations — as well as private companies — Viasat is poised to deliver those types of antennas.

At our Duluth, GA facility near Atlanta, we’ve been building all kinds of satellite antennas for decades, ranging in size from those that can fit in the tail of an aircraft to our latest: enormous, full-motion antennas with diameters of 20 to 24 meters. At nearly 65 to 80 feet in diameter — more than twice the length of a school bus — these types of antennas are relatively uncommon, and Viasat is one of few companies in the world creating them.

These antennas stand in contrast to the ones that make up the ground station network of Viasat’s own fleet of satellites. While our ViaSat-1 ground antennas from 2011 are still pretty large at 7.3m, the ViaSat-2 generation (2017) were only 4.1m in diameter, and our upcoming ViaSat-3 antennas will be even smaller than that. These antennas point to our satellites in geostationary orbit — where the satellite orbits the earth at the same rate as the earth’s rotation, making them appear stationary in the sky. That means ground station antennas don’t need to move, and there’s a benefit to making more, smaller ones rather than fewer large ones. (See story below for more on these antennas.)

“For a potential lunar link, customers are looking at the 20-meter antenna,” said Bill Lawyer, business development director for Viasat’s Earth Observation group in Duluth. “We’re having a lot of discussions as these missions start to take shape.

“There are also plans out there for an international space station off the moon, as well as plans for private sector operators to build stations on the surface as permanent habitats,” he said. “These things are coming in the next few years, and to close the link with Earth just requires a bigger antenna.”

Lawyer said Viasat estimates as few as five of these large antennas positioned around the globe could provide constant connectivity with the moon or other satellites orbiting in the area. Areas covered could also include the Lagrange points, as well as the Cislunar space inside the moon’s orbit.

“These are the newest, latest designs,” he said, noting that the project to create them has taken place over the last four years.  These systems feature the latest in digital technology as well as improvements to the mechanics allowing the antenna to move.

The new Viasat 20m and 24m antennas can spin 360 degrees and articulate in a variety of configurations. And they move at a pretty zippy 15 degrees per second – so they also can support LEO missions.

These antennas represent major investments, so customers really want to have the most flexibility into the future. The new Viasat antennas are also capable of managing different wavelengths, up to and including Ka-band. Sinyard said to do that with the higher-frequency band meant creating a high-precision reflector surface capable of holding contact with the satellite while the antenna is moving.

What the Viasat team is looking for next is more momentum from the various players to make creating such a network economically feasible.

“We’re waiting to see who might emerge with an interest to create something like this, and then potentially lease it back to NASA or others,” Lawyer said.