For Mike Bowen, Viasat turned out to be the perfect place — technically and culturally 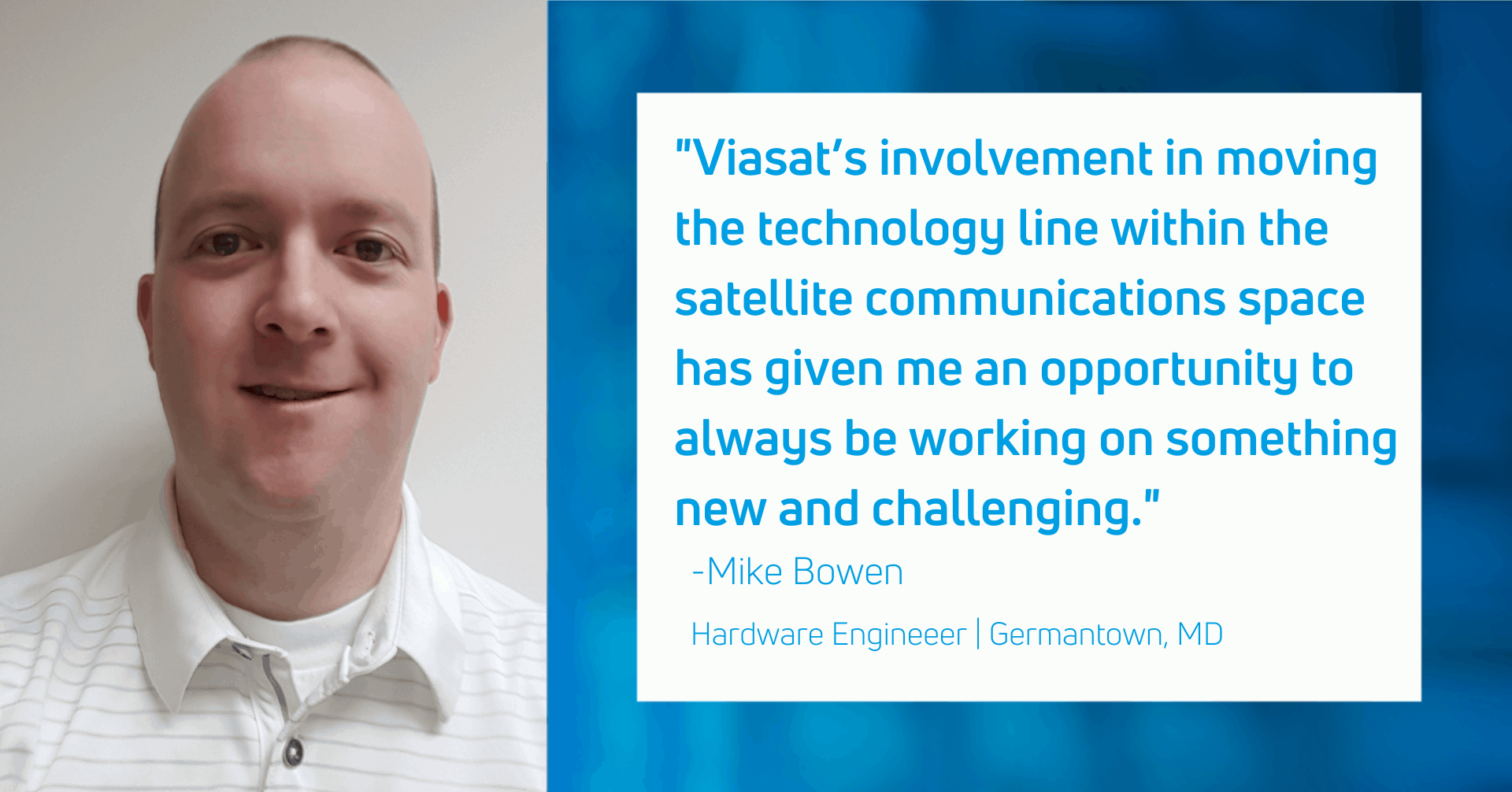 For Mike Bowen, Viasat turned out to be the perfect place — technically and culturally

Viasat was hardware engineer Mike Bowen’s first job after finishing college. Based on his 16-plus years with the company to date, he believes it may be his last.

The East Coast native is based out of Viasat’s Germantown, Maryland office. He’s now leading the end-to-end integration for ViaSat-3 – the current pinnacle of a career that’s been a series of ever-more exciting projects and challenges.

“ViaSat-2 certainly was challenging, but the complexity of the ViaSat-3 system seems like an order of magnitude more complex and challenging,” he said. “It’s a big technological jump.

“The computational complexity of the ground infrastructure that’s required to implement the entire system is greater than anything we’ve done before. And it’s using a lot of new technological components we‘ve never used before. So it’s quite exciting.”

Viasat was not Bowen’s first job offer. When he graduated from the University of Maryland College Park in 2004, he received an offer from Northrop Grumman. The company is one of the world's largest military technology providers with more than 90,000 employees. But before he started work there, a Viasat recruiter contacted Bowen.

Bowen had never heard of Viasat, but he liked what he learned.

“I ultimately decided to take the opportunity with Viasat,” he said. “Because it was a smaller company, I felt I’d have an easier time standing out and progressing.

“It was absolutely the right decision for me. I’ve had a lot of opportunities here. And Viasat’s involvement in moving the technology line within the satellite communications space has given me an opportunity to always be working on something new and challenging. We’re always innovating; we’re never following anyone.”

Bowen knew from a young age he wanted to follow in his father’s civil engineering footsteps. He chose electrical engineering because its use in technology seemed not only fascinating, but rich in opportunity.

More than half his Viasat career to date was spent developing ground-based beam forming (GBBF) systems. Bowen was chief engineer for the development of the Mexican Satellite System, a $45 million project to supply GBBF systems deployed in two Mexican ground stations as well as a control and management system.

He then shifted to the commercial side of the company’s business, helping develop and integrate components in the ViaSat-2 system. He has a similar role with ViaSat-3, focusing on the ground network and supporting the payload development team.

Bowen’s team is preparing now for the ViaSat-3 alpha testing, expected to ramp up in early 2021.

“The fact that we’re now going to have a global constellation of satellites expected to provide an excess of 3 terabits per second is going to open up a lot of business opportunities that just weren’t possible, or as compelling, with our existing satellite network,” he said. “We’ll be in business in many other countries we’ve never been in before, and in a great space to expand our airline coverage so we’ll have coverage across the globe.”

It will also allow Viasat to expand its Community Internet service.

“We’ll still be able to connect areas of the world that can’t afford to pay the same prices one can in the United States at a cost point that’s within their budget,” Bowen said.

His satisfaction with the company isn’t just about the technology but also his coworkers, and how the company treats its employees.

“It really does feel like Viasat has a uniquely good group of people,” he said, adding that throughout the coronavirus crisis, “Everybody’s demonstrating their dedication to the company. And the company is doing everything they can – and probably more than many would expect – in taking care of the employees throughout the whole thing.”

Based on all those factors, Bowen’s not planning to go anywhere else anytime soon.

“I have absolutely no reason to ever leave the company,” he said. “I’ll be with Viasat as long as I’m allowed to be.”

Bowen is married to his wife of 16 years, Danielle. They live in Clarksburg, MD.

Outside of work, he volunteers with an environmental organization his father co-founded, the Anne Arundel Watershed Stewards Academy, and the Alzheimer's Association. Bowen’s father died in 2019 of early onset Lewy body dementia, inspiring him to become involved in efforts to help end Alzheimer’s and dementia.