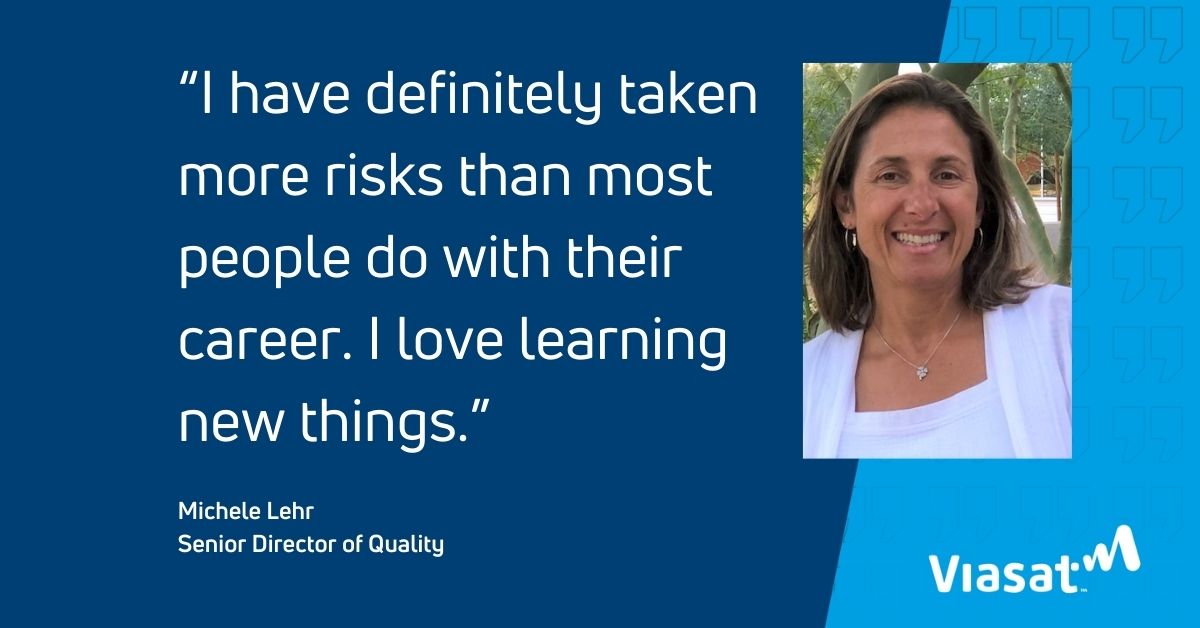 Michele Lehr is a risk-taking introvert, a seemingly contradictory combination that has led to career rewards beyond her expectation.

As Viasat’s senior director of quality, Lehr works closely with Vice President of Corporate Quality Simon Kuo, and her team includes 140 people in a wide variety of departments. Quality leaders act as system connectors, and Lehr’s charge includes guiding the quality team and acting as the business area quality lead for the Space Business Segment. In her dual roles, she interacts with people from engineering, training, environmental compliance, commercial aviation, broadband communications and ViaSat-3 — just to name a few — ensuring all areas work together efficiently.

It’s a complex and challenging role, and one Lehr relishes. It also requires someone with a keen understanding of human behavior. Lehr finished a master’s degree in quality assurance in 2012, but her undergraduate degree was in psychology.

“Much of what I do today is based on psychology,” she said. “At the end of the day, it’s mostly about working with people. My psychology background has helped me throughout my career.”

The southern California native was first exposed to psychology in high school through a last-minute class chosen to fulfill a required elective. Intrigued by brain functions and human behavior, she decided to pursue a career in experimental psychology. Lehr was also a young single mother who needed a job with stable hours and good pay. That led her to work as a quality data analyst.

“I ended up falling in love with data and the idea of using data to make changes and improve processes — which is exactly what experimental psychology is all about,” she said. “But with this, I also had the immediate gratification of seeing those processes change.”

Lehr eventually became a quality engineer and was recruited to another company. She repeatedly made similar leaps early in her career, each offering new challenges and rewards. Those jobs have included working for a start-up that helped produce unmanned flight control systems for government drones and for multinational aerospace companies like Rockwell Collins.

“I have definitely taken more risks than most people do with their career,” she said. “I love learning new things, as long as it makes sense career- and family-wise.”

That risk-taking has often required geographic change as well. In the past two decades, Lehr and her family have lived in 11 different homes — three of those since the pandemic began.

Consideration of her family’s needs played a central part in Lehr’s decision to accept a job with Viasat, as it has in all her career moves. She left a job in northern California when her family realized the area was not a good fit for their lifestyle. She and her husband have successfully negotiated on each move, balancing their career goals against the social, financial and emotional costs of relocating.

Almost all of her career advancement opportunities have come through networking, with a notable exception — Viasat. At a crossroads in her career, she wanted to work for an established company that also maintained the excitement of a start-up.

“When I was researching companies that fit that description, I discovered Viasat,” she said.

In 2017, when Viasat offered her a quality manager position at Viasat’s Duluth, GA office, the family agreed together that she should accept it.

“The decision to move to Atlanta was definitely worth it,” she said. “I think it really launched everything else for me.

“It was a smaller role than I had had in the past, but I was super excited about Viasat and we fell in love with Georgia. My career had been full throttle since 2002. I thought I would go to the Atlanta suburbs, and my personal life and my career would slow down a bit.”

But that’s now how things shook out.

In addition to her position in Duluth, Lehr soon also became quality lead for Viasat’s Tempe office — a job that resulted in twice-monthly travel to Arizona.

Just before the pandemic, she was offered her current position as the corporate quality functional lead in Carlsbad. The timing, with Lehr’s daughter leaving middle school and about to start high school, was good for a move. So Lehr came back to her home state.

Her almost four years with Viasat have been more exciting than Lehr could ever have imagined — ample payoff for the risk of accepting her initially smaller role in Duluth.

“It’s definitely been much more than I ever anticipated going into it,” she said. “I have no regrets. It’s been amazing.”