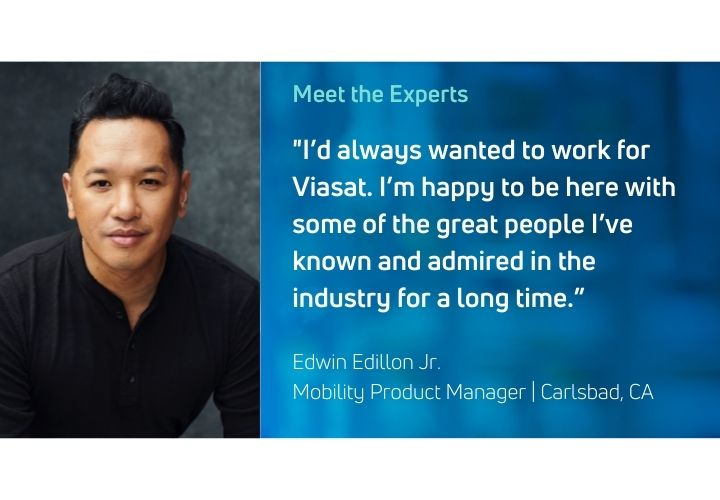 Edwin Edillon Jr. spends a lot of time on airplanes. And every time he flies, Viasat’s product manager for Global Enterprise & Mobility subtly checks out what other passengers are doing.

“I like to see how people interact with things on the plane. Whether it be the entertainment system, the seats, and especially what they use Wi-Fi for,” he said. “I get really geeked out about this stuff.”

With family in New York and his home in California, he gets a lot of time to observe these behaviors, using it to help guide his work.

Edillon joined Viasat in January and is just wrapping up installation of the NBA League Pass, an offer for JetBlue and American Airlines international travelers that gives them access to live games and other basketball-related highlights and news. The pass, which one reviewer called “a basketball fan’s dream come true,” typically costs $200 a year. It’s free in-flight for JetBlue passengers, and included with the cost of Wi-Fi on American Airlines.

Edillon said its addition to Viasat’s in-flight service is a win for the airlines, passengers, the NBA and Viasat.

“We are the only one offering the NBA League Pass in-flight,” he said. “We wanted to provide a good sports experience on the plane, and the NBA wants to grow their global presence and popularity. Through these airlines, we can provide them access to a lot of international travelers.”

Viasat has a contract to provide the service seasonally for the next several years. But in Edillon’s mind, the NBA deal is far more than just a notable business partnership. He believes it’s a first step in building Viasat’s business as a more modern, in-flight entertainment provider.

“Getting to work with a partner the caliber of the NBA is super exciting,” he said. “But it also shows we’ve crossed over to being more than just an internet provider. We’re becoming a provider of streaming entertainment and ancillary offers for travelers. The NBA found us attractive because we provide service to more than just one airline. We’re able to make deals to the masses.

With content partnerships like those with Apple Music, fuboTV, NBA League Pass and another recently announced with TikTok, Edillon’s team at Viasat continues to bridge the divide between on-the-ground and inflight experiences. Where once the onboard content experience was curated, passengers can now bring their own devices and subscriptions on board, or sample subscriptions they can then take home with them.

Edillon has ample experience at other companies creating such partnerships.

A Chicago native raised in New York, his family moved to Southern California when he was a teenager. Edillon says he was fascinated with computers from childhood.

“I grew up building computers,” he said. “When the internet came about, I was on dial-up, surfing the web using AOL. I got into graphic design and programming. I was then, and still am, amazed at how powerful a device a computer is.”

Edillon built on that fascination in college. He majored in human computer interaction, which he describes as the intersection of psychology, usability and technology.

Early in his career, he worked several years at a company that installed inflight entertainment screens on airplanes. The work dovetailed with Edillon’s goals, which he’s continued to pursue since.

“I wanted to create the easiest-to-use inflight entertainment,” he said. “I wanted it to be like a very good touchscreen — clean, not so reflective, providing the best movies and entertainment.

“I spent a big chunk of my career doing that, learning all the airlines, the international nuances. I learned that Japanese customers like big, bright colorful icons. Arabic customers read from right to left. Digital tastes vary in different cultures, so what you design for an American customer does not apply everywhere.”

Edillon worked in Chicago as a director of product management for inflight experiences for two years. But in 2019, family brought him back to California.

“I was able to find a role at Viasat; it’s been the best career decision I’ve made so far,” he said. “The in-flight entertainment industry is so small, everyone knows everyone. I’d always wanted to work for Viasat. I’m happy to be here with some of the great people I’ve known and admired in the industry for a long time.”

Though Edillon just joined Viasat in January 2021, he already feels at home.

“We work hard and things are so fun, so it goes by fast,” he said. “I feel comfortable and settled.”

What continues to strike him afresh are the people he meets at Viasat.

“Everyone, including the leadership, is really smart, but very humble, helpful, and hard working,” he said. “The people are just really nice. And the facilities are like nothing I’ve ever experienced — the attention to detail, the visual creativity. I’m used to tan walls and dull office furniture. But Viasat makes you feel like you’re part of something.

“It’s also just really interesting being on the side of the fence where you have the best (inflight) product. When you represent that best-in-class product but still do it gracefully and without the ego you could have, I think that’s pretty cool.”

In addition to enjoying his work, Edillon enjoys knowing he and his team are providing a valuable service to consumers — one that is poised for big growth.

“More people are flying, and for some, there’s travel anxiety,” he said. “People need to be distracted, and they want to stay connected.

“I think the demand for really good internet and even better entertainment is going to be where things go. And airlines will want to offset that spend with us by bringing in third-party sponsors and creative advertising. As travelers, we’ll be more exposed to ads, but the tradeoff is that there will be a lot more cool things we’ll all be able to access on planes. We have a lot of opportunity to grow and continue to innovate with our amazing internet product; we also have a lot of exciting developments ahead.”