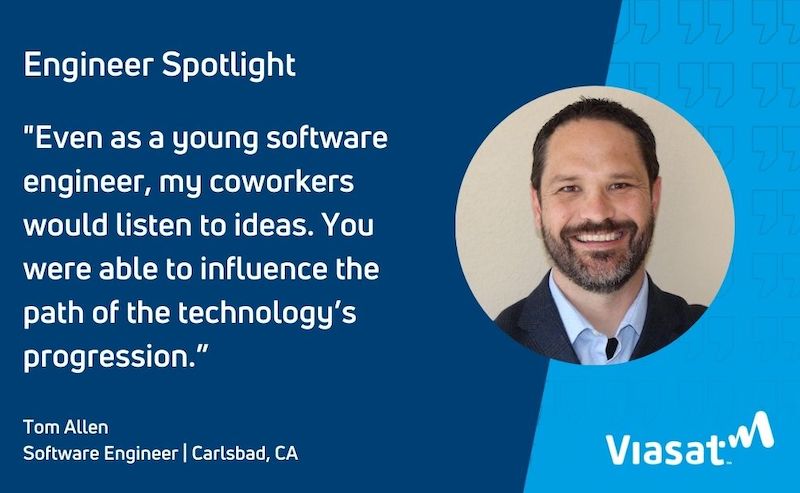 Software engineer Tom Allen chose to work at Viasat 20 years ago out of admiration for the company’s mission. He never imagined he’d stay and work in the same arena for decades – or the experiences his career would offer.

“If you’d asked me 20 years ago if I thought I’d still be doing tactical data links, I’d have said you were crazy,” said Allen, “but it’s been a great ride.”

Allen designs software for Viasat’s tactical data links (TDL) systems, wireless communications used by the military to coordinate during land, air and sea operations. Viasat’s TDL products implement the Link 16 waveform, enabling U.S. and NATO allies to share information over a common communications link. With this critical technology, they can jointly observe the battlespace to identify threats and targets.

Allen says his work in developing the technology has been rewarding on many levels.

“It’s taken me more places than I ever thought it would,” he said. “I’ve given elevator speeches to members of Congress, presented to generals and been out in the middle of the desert with special operators using our radios. And I’ve gotten to travel all over the world doing it.”

The Southern California native says technology is in his blood; both his mother and grandfather worked in IT. From a young age, Allen shared that interest. He earned a computer science degree at the University of California at Riverside, moving to San Diego after graduation in 2000. A friend suggested he consider Viasat.

The dotcom bubble was still growing then, but Allen wanted a career unlike the ones he saw his friends pursuing.

“Viasat drew me because they were a company that was still small enough to be agile and fun, but still had a little bit of permanence to them,” he said. “Everybody I went to school with was going to the next dotcom company that was going to change the world, delivering pet food to your door or something like that. Viasat was different. It provided something more tangible and more hands on. What I was doing felt real.”

Throughout his career, Allen has seen firsthand the impact of his work, meeting family members and members of the military who have benefitted from Viasat’s technology.

“I’ve seen concrete examples of how what we do impacts the people who protect our country; what we do can literally be life and death,” he said. “That’s one of the things I really enjoy about working here at Viasat — we’re encouraged to see who we’re helping on a very personal level.”

The Carlsbad engineer has been instrumental in evolving Viasat’s TDL technology. Radios that once had to be built into a military ship or aircraft in multiple pieces are now not much larger than a smartphone.

“And I got to help drive that evolution. Even as a young software engineer, my coworkers would listen to ideas. You were able to influence the path of the technology’s progression.”

That’s among the many things Allen appreciates about Viasat. Another is its family-friendly policies and attitudes. As a father of four, he and his wife Maria have a busy home life.

“There’s never been a question of whether I can go to a soccer game or school play,” he said. “I’m not obligated to put my career in front of my family. We’re trusted to get our work done and manage our time, while keeping our families at the forefront.”

It all adds up to a career that has so far exceeded Allen’s expectations, and one he has no immediate plans to change.

“I know people I went to school with that had five or six jobs by the time I’d been here five years,” he said. “I enjoy the stability, while at the same time being able to work on exciting and new things. We do things typical government contractors don’t do, that in a lot of ways are disruptive, and that’s a good thing.”