‘Love. Connect Without Limits’: What it means to Viasat employees during Pride Month 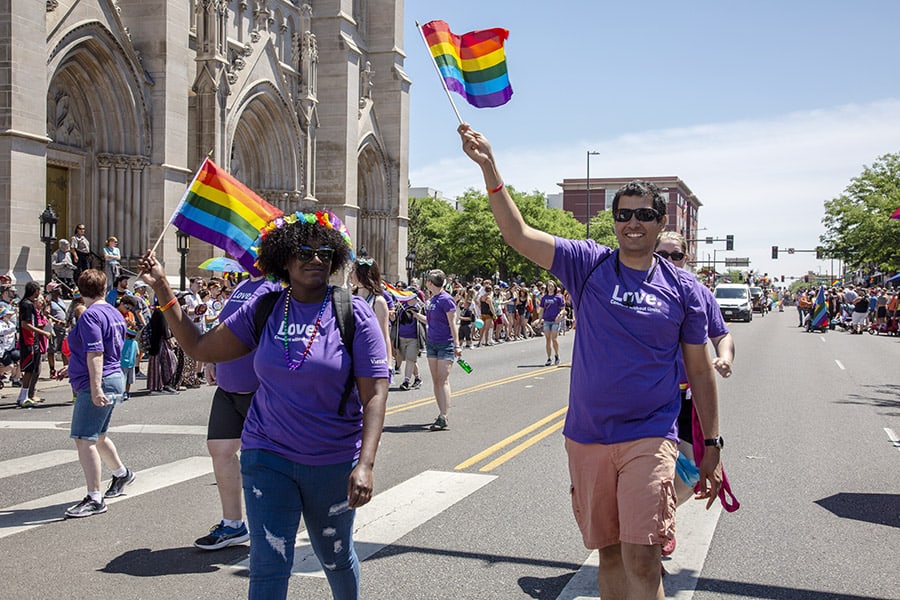 Rainbow-themed festivities were in order at Viasat this June as the company hosted a series of events dedicated to celebrating LGBTQ Pride across its many locations. From marching in Pride parades to fundraising for LGBTQ-centered nonprofit organizations, members of Viasat Pride Alliance (VSPA) chapters around the world celebrated the idea of being yourself.

This year’s motto is: “Love. Connect without limits.” The idea originated from Stephen Kahlina, a customer success manager in charge of the events for Viasat’s Dublin office.

Kahlina believes the phrase covers all of Viasat’s business areas, but is also a call to intrigue potential employees. He wants the motto to illustrate how Viasat celebrates individuality.

Matthew Bancroft, an IT scrum master who began the company’s employee group in 2017, agreed.

“About 50% of LGBTQ workers are not out at work, and that’s a huge statistic that we should really change,” Matthew said. “We wanted to show people they could bring their whole selves to work.”

Bancroft said he’s excited to help implement company programs that will help transgender and queer employees feel more comfortable at work. He said he plans to partner with the People & Culture team to develop “transitioning at work guidelines,” which will include education and resources about transitioning at work, including education around gender pronouns.

At the Denver office, a group of about 20 employees marched in Denver’s June 16 Pride Parade, handing out Viasat wristbands and info cards.

“There were a lot of moms there that had signs that said ‘Free Mom Hugs,’” said data engineer Allison Walther, lead of Denver’s VSPA. “And the rest of the Viasat parade started doing the same thing. At one point I turned around and half of the people that were marching with us were in the crowd giving people hugs, which was funny and pretty cute to see.” 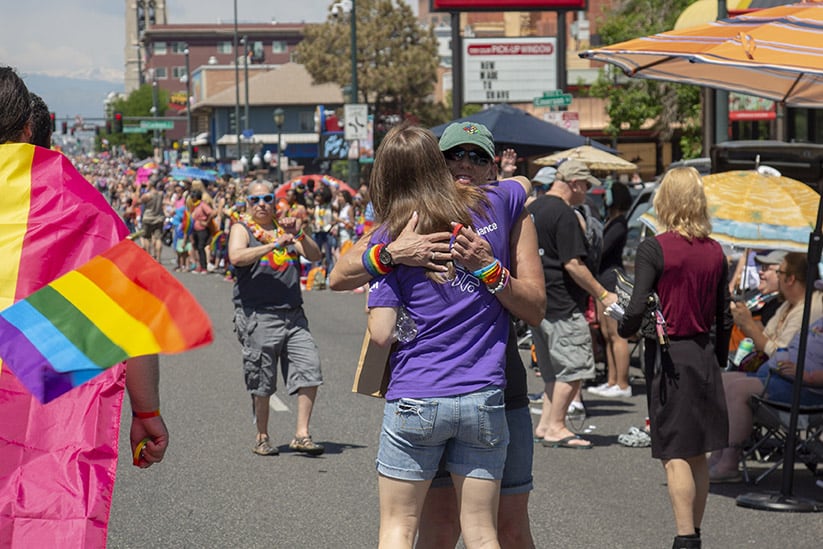 A Viasat Denver employee, caught up in the “free mom hugs” frenzy, hugs someone from the crowd.

A chance to give back

Walther and the Denver Pride leadership team wanted to emulate the excitement the Dublin office created last year around its Pride celebrations, so they held events prior to the parade that contributed to the broader Denver community. Group members tapped into their culinary talents and ran a bake sale. The bake sale raised funds for Urban Peak, an organization that helps homeless youth in Denver.

“Urban Peak does this really wonderful job of creating this community that’s accepting and wonderful and helpful, so that was another goal we accomplished – to help an external community,” Walther said.

Celebrating Pride by helping the community is a common thread that runs throughout many VSPA chapters. At the College Station, Texas campus, members are organizing a blood drive for August in partnership with Viasat’s Wellness team. Joshua Tutt, a technical support representative who runs College Station’s VSPA, said he believes donating blood is a “civic duty.” He hopes the blood drive will be a way for the company to give back and also highlight rules that prevent some members of the LGBTQ community from donating blood.

“Normally when you donate blood it usually stays local in your community, so our community depends on us to provide regular donations and volunteer in that way,” Tutt said. “People who are like me aren’t able to participate in that civic duty, and that frustrates me. So instead of being frustrated, I decided I was going to try and convince 30 or more of my coworkers to participate.”

Inclusion is also important to Viasat’s Pride celebrations. Viasat’s Marlborough, Massachusetts office made sure to start conversations about the LGBTQ community through brown-bag lunches, where employees were encouraged to ask questions and participate in a casual discussion.

“The first time we did it, I was worried it would be a lot of people from the Pride Alliance speaking,” said software engineer Alec Ishak, the lead for Marlborough’s VSPA. “But I was really happy to see the engineering directors were there, and people weren’t afraid to ask questions. I’m really glad we could foster that safe space — if you’re here with good intentions, that’s all you have to do. There’s no judgment.”

For Ishak, the experience of hosting these events was reaffirming and encouraging.

“I think going into it, you worry about pushback, whether people see it as political, or ideologically don’t agree with what we’re talking about,” he said. “But it’s seeing the amount of people that came to these talks, the number of people who donated to our fundraisers, and all of this support that really dissuades any negativity that might happen. Our worries are so vastly outweighed by this support that we become more sure that we are doing the right thing.”