Launch partners all in place for three ViaSat-3 satellites 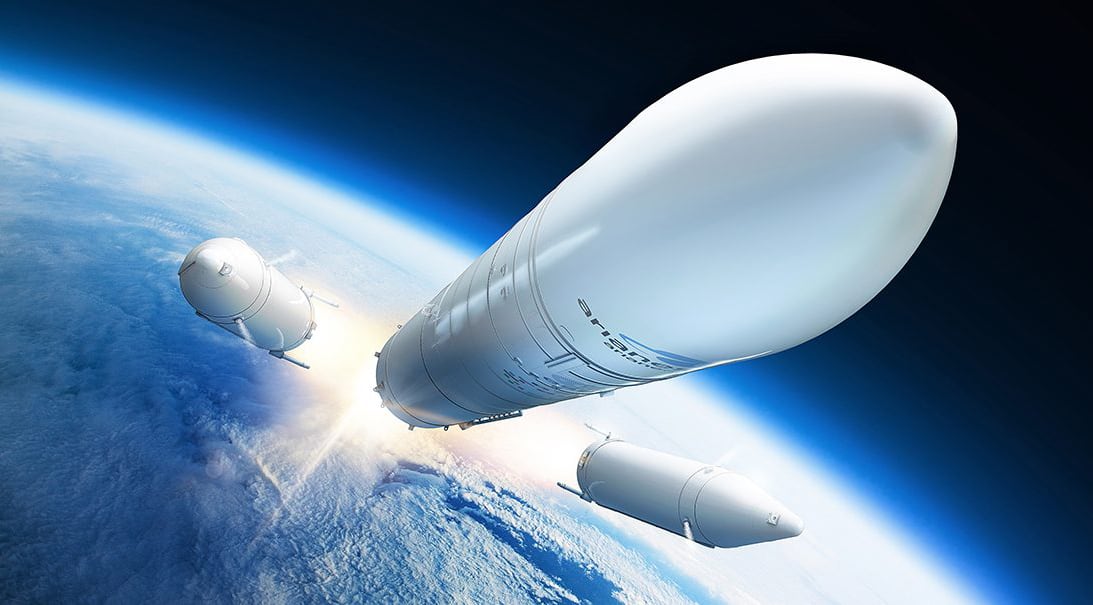 When Viasat announced on June 18 that it planned to modify its contract with launch partner Arianespace, it marked a significant change: One of the three upcoming ViaSat-3 satellites would be launched on Arianespace’s next-generation Ariane 6 launcher.

For several decades, the workhorse Arianespace launch vehicle for large satellites was the Ariane 5. This rocket launched our ViaSat-2 satellite in 2017, as well as our WildBlue-1 satellite in 2007 and Anik F2 in 2004. And while the Ariane 5 is a powerful launch vehicle capable of carrying two large satellites at a time hundreds of kilometers into space, the limitations of the vehicle result in longer than desirable orbit-raising time for satellites with fully electric propulsion, such as the ViaSat-3 constellation.

See an update on the spaceport modifications for the Ariane 6

With ViaSat-2, which used a hybrid of traditional chemical propulsion and newer-technology electric propulsion, that meant months in transfer orbit before it could reach its orbital slot and become operational. While chemical-fueled spacecraft could make the journey a lot faster, Viasat opted for the hybrid chemical/electric design, in part to save more mass for additional payload electronics to boost the satellite’s capacity.

We will use fully electric propulsion for all of our ViaSat-3 satellites.

The Ariane 64 will be more powerful than Ariane 5, and more importantly, will have a re-startable upper stage engine that will enable mission designs that are better tailored to the characteristics of each satellite. The result will be optimized transfer orbits and thus, greatly reduced orbit-raising time.

Arianespace is one of three launch partners under contract to launch Viasat’s three-satellite global constellation, ViaSat-3. (The other two are SpaceX and United Launch Alliance.) The first satellite is planned for launch in 2021.

Read more about the ViaSat-3 project

Wiener Kernisan, President of Arianespace U.S., explained that, while the Ariane 5 was technically capable of achieving much higher altitude, without a re-startable upper stage, it was limited to 250 km by international agreements to reduce space junk. Were the Ariane 5 to fly to a higher orbit without a re-startable upper stage, it would take decades for the spent upper- stage’s orbit to deteriorate enough to burn up in the atmosphere. The goal is for that time period to be 25 years or less.

“On the Ariane 6, we have an upper stage we can restart to optimize the mission design to better suit the payload(s) and bring the stage back to a lower orbit for faster decay and re-entry in the atmosphere.” Kernisan said.

In other words, the Ariane 6 upper stage can deploy the satellites in more optimized orbits by using its multiple restart capability. After the satellites are deployed, the upper-stage engine can be reignited again and brought to a lower altitude to conform with the 25-year goal.

The Ariane 6 has two main configurations: the A62 with two solid rocket boosters and the A64, which has four. It’s this second, more powerful version of the Ariane 6 that will take one of the ViaSat-3 satellites into orbit. The A64 capabilities puts Arianespace more in line with our other launch partners, who also have a multiple re-start capability.

Compared with a typical vendor a company might purchase goods or services from, the relationship between a launch company like Arianespace and a satellite operator like Viasat is much more of a partnership.

“All customers are different, but a big customer like Viasat, we work with them continuously,” Kernisan said. “Even before a launch contract is done, we’re in discussions about future launches.”

Kernisan said his relationship with Dave Abrahamian, Vice President, Satellite Systems at Viasat, extends back years to when they both worked for different companies.

“It really is a unique kind of relationship that requires us to be in constant contact and working collaboratively for years leading up to each launch,” Abrahamian said.

In addition to the technical aspects of the partnership, scheduling is another area where communication is critical. Any launch company is subject to schedule adjustments due to issues the satellite manufacturer might have, weather delays, preceding launch delays and other unforeseen events.

A big part of the reason Viasat is using three launch partners for our next-generation ViaSat-3 satellites is to help offset those types of issues.

“It really affords us a greater amount of flexibility and a bit of insurance against some of these variables that can delay a launch,” Abrahamian said. “From a pure business perspective, a satellite that’s ready to go into service but that’s sitting on the ground is a satellite that’s not earning money. Having launch vehicle diversity is a way to help ensure we can launch on our schedule and that each satellite is not stuck on the ground any longer than it has to be.”

Which launch partner is paired with which satellite has not yet been announced.

The Ariane 5 has launched over one hundred times since its introduction in 1996. Ariane 6, Kernisan said, has been in development for more than five years. Between 2021 and 2023, both launch vehicles will be in use. After this transition period, the Ariane 6 will replace the Ariane 5.

To accommodate both vehicles, Arianespace built an entirely new launch pad, which Kernisan said is nearly finished. The new setup, he said, is quite different from the Ariane 5. Currently, the Ariane 5 rocket is assembled vertically and the satellites are integrated with the launch vehicle in a final assembly building, then wheeled out to the launch pad on rails.

“It saves time,” Kernisan said. “And it makes things easier since the rocket is integrated horizontally.”

Between now and when one of the ViaSat-3 satellites is launched atop an Ariane A64, Kernisan said the conversation between the companies will continue.

“We’ve always worked in a collaborative manner in a way that’s a win-win for both companies,” he said. “We think Viasat has a great future and we hope to continue being part of that success.”