Kristi Jaska has seen Viasat through it all, and she’s excited for what lies ahead 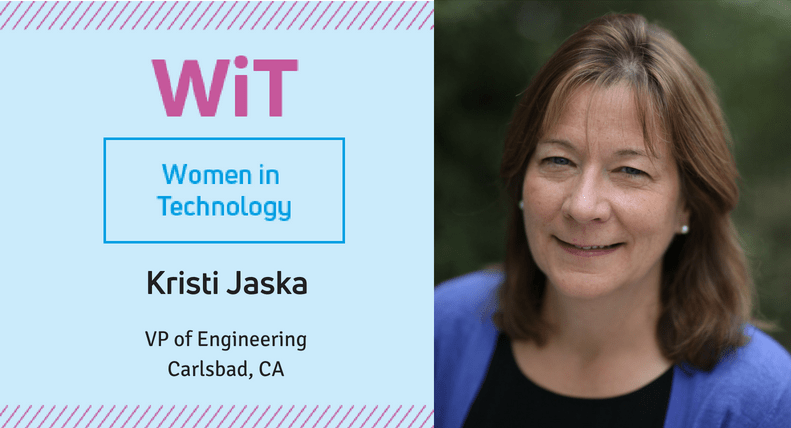 A few years ago, someone told Kristi Jaska’s daughter that it’s not what you know, it’s who you know. That statement didn’t sit well with Jaska.

“I was a little outraged at that,” Jaska said. “I think it’s most definitely about what you know, and then sharing what you know with other people to find new opportunities. It’s both.”

Jaska, who is VP of engineering at Viasat, pioneered a successful career by drawing from the extensive foundation of knowledge she’s built over a lifetime.

“I’ve always liked math and science, but I love English, too,” Jaska said. “I think it’s important to have breadth when you’re an engineer. You might get an idea from a book you’re reading or an experience you’re having.”

Jaska is a first-generation American. Her family immigrated as refugees from Estonia – instilling in Jaska the importance of working hard to make a good living.

“There’s the practical part of making a living as an engineer,” Jaska said. “But it can’t just be about that – you have to do what you love.”

And Jaska loves everything about being an engineer. She graduated with bachelor’s and master’s degrees in electrical engineering from Cornell, and she’s enjoyed making an impact on the world through her profession since then.

“It’s been exciting all along,” Jaska said.

As the sixth person ever to begin working at Viasat, Jaska has seen the company through location changes, major growth and satellite launches.

“Viasat has been like a startup, over and over all these times,” Jaska said. “That’s really amazing.”

Her favorite part about working at the company is seeing all that’s been accomplished and knowing that so much more lies ahead.

“We’re at the point where we can really make an impact on the world,” Jaska said. “I work with such smart, capable people. It’s exciting to get things done and achieve great things together.”

Though Jaska would like to see more women pursue the STEM field, she’s happy with the experience she’s had thus far working in the mostly male profession.

“Once you start working on something, you don’t notice it anymore – the gender lines go away,” she said. “I focus and get so excited about my work, and I plow through what I’m doing with people who just happen to be mostly men.”

When she’s not working hard at Viasat, you can find Jaska running along the shore at Moonlight Beach or hiking popular Southern California trails, such as Torrey Pines.

“I love to stay healthy,” Jaska said. “Just being outside and exercising is great. I also love art and going to galleries around San Diego.”

As an empty-nester, Jaska also makes sure spend time keeping in touch with her daughter — who just finished her freshman year of college — and her son, who just finished his junior year. “We visit them a lot and Skype every weekend,” Jaska said.

Jaska understands just how formative college years can be for young people, and she’s hopeful for the generations to come. She encourages young men and women to break out of their shells and show the world just how much they know.