JADC2: Because the U.S. military needs to talk 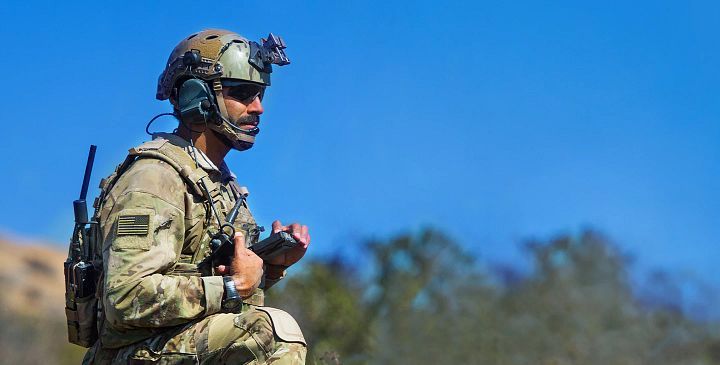 Whether it's a warfighter on the ground with a handheld radio, an aircraft, or a ship at sea, the JADC2 initiative aims to integrate a variety of military communications platforms into one seamless, cloud-based platform.

There are hundreds of mobile phone models on the market, which connect through various physical and logical networks to provide the ubiquitous commercial mobile service we all enjoy.

For the most part, the system works seamlessly and transparently. Our phones can jump from cell tower to cell tower or between 5G, LTE, 4G, or Wi-Fi without us even noticing. We take it for granted that we can effortlessly talk with friends down the street, relatives on the other side of the country, and business partners across the world, regardless of the type of device they use or their service provider.

That’s not the case with the U.S. military. Its current communications ecosystem is comprised of a multiplicity of “stovepiped” devices and networks designed for each individual military service rather than for joint warfare. Addressing the lack of a streamlined system enabling communications between all military entities is something high on the list for the Pentagon.

To eliminate that stove-piping of data, the Department of Defense has created the Joint All- Domain Command and Control (JADC2) initiative. JADC2 is a cloud-based system that will collect and integrate intelligence, surveillance, and reconnaissance (ISR) data from sensors across the U.S. military, and then use artificial intelligence (AI) algorithms to identify targets and recommend the optimum weapon to strike them. This creates the potential for a vast, real-time kill chain where targeting data from numerous sensors is relayed, assessed, and distributed across service and theater boundaries, enabling strikes on time-sensitive targets with long-range fires.

JADC2 is the logical culmination of decades of research and development into AI, networking, and satellite communications. It’s also a staggering technical challenge to bring it from concept to operational capability.

“Some people are using handheld radios,” explains Craig Miller, President of Viasat Government Systems. “Some are using 20-year-old radios or even older. Some are broadband SATCOM users. Some are aircraft on NC3 (nuclear command and control) missions. They all use different waveforms. They all use different technologies to communicate with each other. How do you connect them?”

Indeed, JADC2 is actually an umbrella of programs with a common goal, including the Army’s Project Convergence, the Air Force’s Advanced Battle Management Systems (ABMS), the Navy’s Project Overmatch, and teams from DoD and the Joint Staff. The Space Development Agency, which will fall under the Space Force in 2022, is also building its own integrated transport layer network, part of a new National Defense Space Architecture (NDSA), that will help serve as the backbone for JADC2.

For these disparate networks to operate seamlessly, some kind of glue is needed.

Viasat has that glue. The company has long experience in connecting diverse and disparate users and building interoperability across complex networks. For example, Viasat’s deep and enduring partnership with the U.S. Special Operations Command (SOCOM) has allowed us to develop unique opportunities to apply our cutting-edge commercial technologies to rapidly deploy new and advanced military operational capabilities in support of their most critical missions.

With SOCOM’s need to link data across services to enable faster operations, we have helped bring a JADC2 vision to reality.


Another example is the XVI Low Earth Orbit (LEO) satellite Viasat is building. It’s the first of its kind of small, low-orbit spacecraft offering beyond-line-of-sight (BLOS)/Link 16 communications This capability will enable users to join the JADC2 kill chain even when normal line-of-sight communications are blocked. It can also provide internet access to share data anywhere in the world in real time.

In fact, Viasat’s satellite communications (SATCOM) business serves as a model of how JADC2 can work. In addition to being a prominent commercial SATCOM provider, Viasat is also an internet service provider (ISP). Viasat’s own geostationary satellites cover a vast region that currently includes the Americas and Europe, with partner satellites in Australia and South America. To cover other parts of the Earth, the company partners with other SATCOM providers to use their satellite networks. Even as Viasat expands its global broadband coverage capabilities with the upcoming ViaSat-3 constellation, there will still be a need for integration and interoperability with other networks to ensure reliable and resilient connectivity.

“We stitch a network together out of our satellites and their satellites to create a seamless experience,” Miller says. “We do it for Community Wi-Fi. We do it for airplanes. We do it for maritime vessels. We do it for senior leaders across the U.S. Government across different modes of transportation. And that's also JADC2, isn’t it? From high-level users to someone with a handheld in a foxhole — we can bring together all those capabilities: the visualization, data processing, and cloud connectivity.”

Miller also points to the internet itself as an example of how numerous disparate users can share a common platform, even allowing interoperability for those who don’t use a common standard like TCP/IP.

“Existing commercial standards solve this problem at the network layer, and you're probably going to do better using existing standards than creating new ones.”

But there are other daunting challenges that JADC2 must overcome, especially in terms of security.

A single military-wide communications system is a tempting target for the cyberweapons and jamming systems that China and Russia are heavily investing in.

“You can’t just tell everyone to ‘use this waveform at this frequency’ because that will never work,” Miller says. “You can't recapitalize every terminal to synchronize on a waveform. And even if you could, that's a terrible idea. You’re creating a single attack vector that allows the adversary to exploit and disrupt everything. You have to create a portfolio of options that gives you diversity, proliferation, and redundancy to create resilience and interoperability.”

But as a global ISP, Viasat is expert at fending off billions of cyberthreats targeting commercial traffic every day. The company maintains a 24/7 cybersecurity operations center with such sophisticated cyberdefense capabilities that it is one of only four commercial cyber providers authorized to receive classified cyber threat intelligence from the DoD.

Miller argues that DoD should take advantage of the creativity and rapid innovation of the private sector by giving companies the flexibility to pursue solutions. This means DoD should set overall goals and desired outcomes rather than take ownership of both the technology and the development process.

“They should specify the effect they want,” Miller says. “And then the commercial sector will bring them the answer.”

This approach is well-suited for JADC2. “Probably the biggest thing that commercial can do well is the demonstrated ability to manage an enterprise that consists of a bunch of different kinds of networks,” Miller adds.

In the end, Miller believes JADC2 will deliver for the military the same kind of seamless communications experience that we expect as consumers.

“Because you don't care if your cellphone is on Bluetooth, or Wi-Fi, or LTE, or if it's roaming on to another carrier,” he says. “That's where we want to get with military communications.”