In India, students get a tech lift with computer lab from Viasat employees

Surrounded by technology companies, students at a government-run school were studying computer science through pictures — until Viasat got involved.

Imagine teaching teenagers about computers using only photographs. That premise, which sounds ludicrous to most people in the United States, was reality for about 670 students in Chennai, India. That all changed when Viasat donated five computers and set up a computer lab at the school.

For the first time in their lives, the students touched keyboards and watched computer screens respond to their commands. Much more than just a thrilling experience, the technology is a potentially life-changing gift.

“You have given us a great opportunity; thank you so much,” said 11th grader Muthulakshmi. “I started studying computer science … initially we didn’t have a computer. These computers will help us study several fields of our interest.”

The school is within easy walking distance of one of Viasat’s two Chennai offices in southern India. It’s also surrounded by the offices of other major technology companies, including Amazon and Ericcson Global Solutions. Employees from some of those companies sometimes exercise on the school playground.

Despite the proximity of all that technology and knowledge, the prospects for students at the government-run school to ever work in those fields were dim. Government-run schools operate on public funds. Most children attend private schools; those whose don’t come from economically disadvantaged families.

“Nobody (from the neighboring companies) had bothered to look at what was happening with these kids,” said Vinod Sivadas, head of Viasat India’s People & Culture. 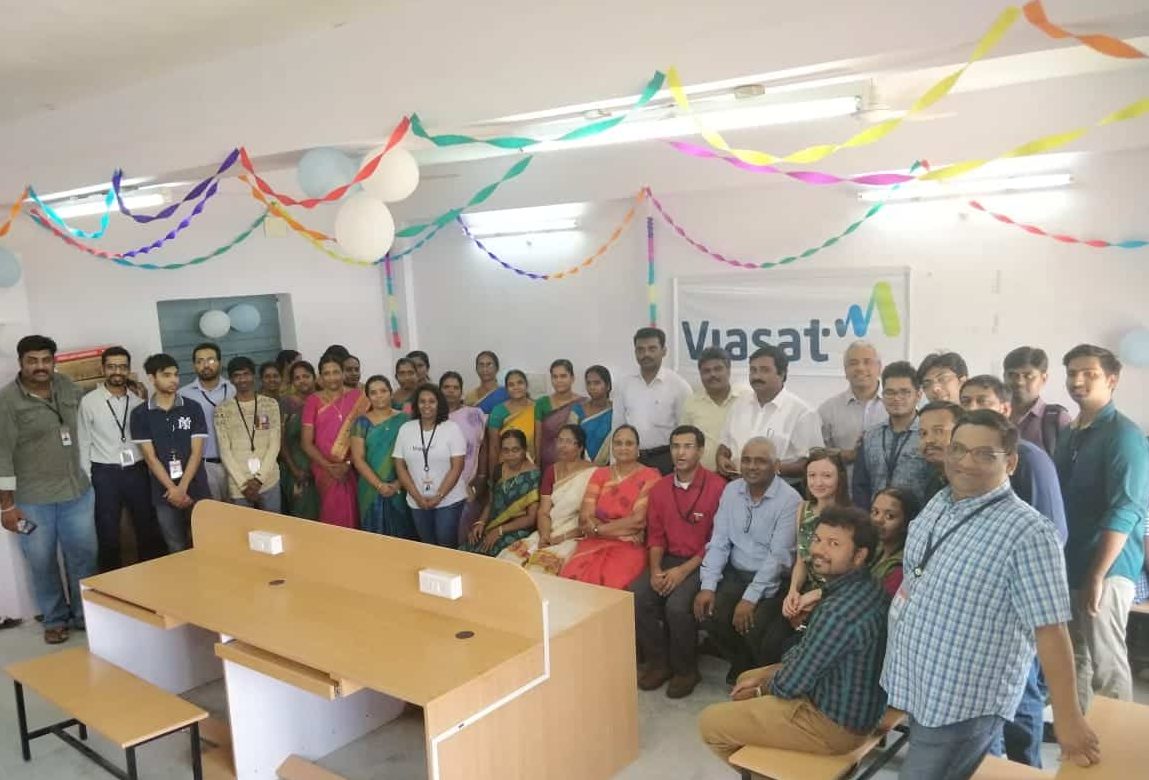 Viasat-India employees and others celebrate the opening of the new computer lab at the school.

Viasat Chennai employees had several smaller volunteer projects with the school – planting trees and painting classrooms – and saw the need for something much more impactful. In early September, the school dedicated the new computer lab.

“One of the students said our action has made them think what is possible,” Sivadas said. “Until then, many of them thought it was completely impossible to work at any of these companies. This has given the children confidence and hope that someday they could.

“Now they can practice what they’re studying.”

Viasat’s employees aren’t done yet. Sivadas plans to put together a small group of employees willing to share their knowledge with the students.

“We plan to create a small team of 4-5 volunteer teachers to teach them about computers for an hour a week,” Sivadas said. “That will be our next level.”

Viasat employees of the Chennai offices – which opened in 2016 and 2018 – have been active volunteers from the start, doing beach and lake cleanups; donating blood; collecting clothes and visiting seniors; and conducting sports events for children.

“Amidst all these things, many of us found this (the school donation) especially touching,” Sivadas said. “It makes a big difference to these kids who have so much of their lives ahead. It can make a huge difference not only in their careers, but for generations to come.”