Viasat VP of information technology led the effort to open an Austin office. Now he aims to recruit Viasat engineers from his alma mater, UT Austin. 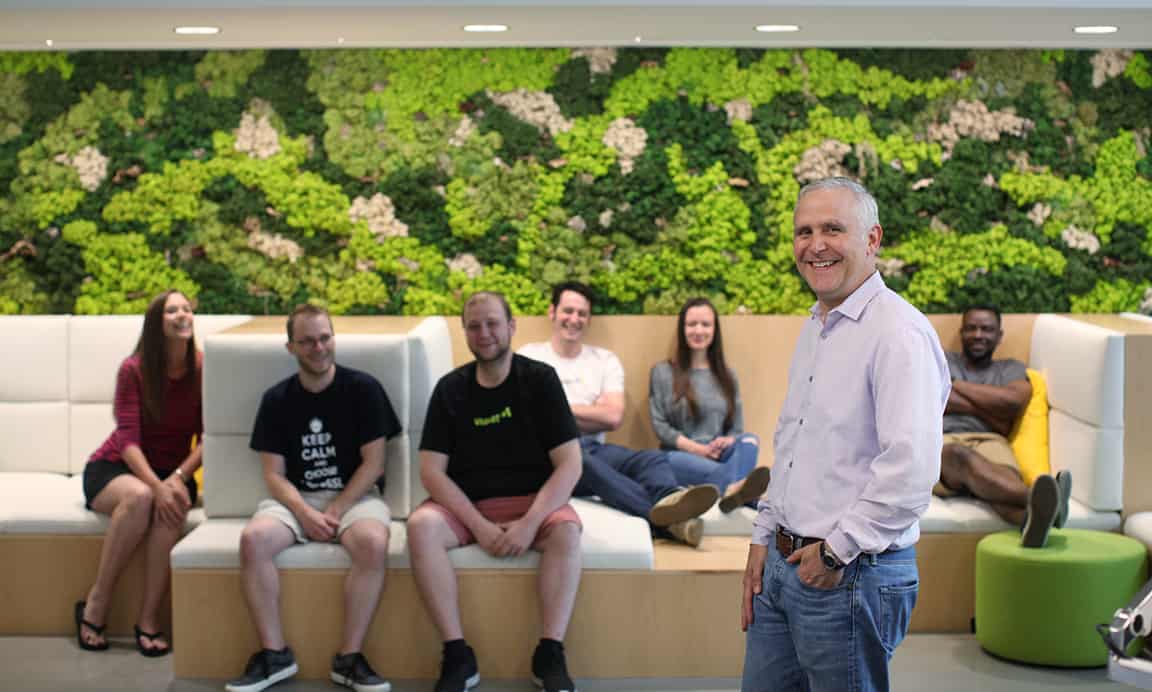 Mark Colaluca fell in love with Austin when he was a college student. Twenty-five years later, he’s back – this time to head one of Viasat’s newest corporate offices. Colaluca, Viasat’s vice president of information technology, led the effort to open the Austin office. That dream came true in 2017, and now he aims to recruit Viasat engineers from his alma mater.

The Texas native earned a bachelor’s degree in electrical engineering at UT-Austin in 1992.

“I love it here,” he said. “Especially if you’re a college student, it’s great. What I like most is that it’s a very creative community – architects, artists, musicians, content producers, developers – you tend to find more creative people here. And if you love the outdoors, there’s a lot to do here.”

Colaluca shares that enthusiasm for Austin with his staff. 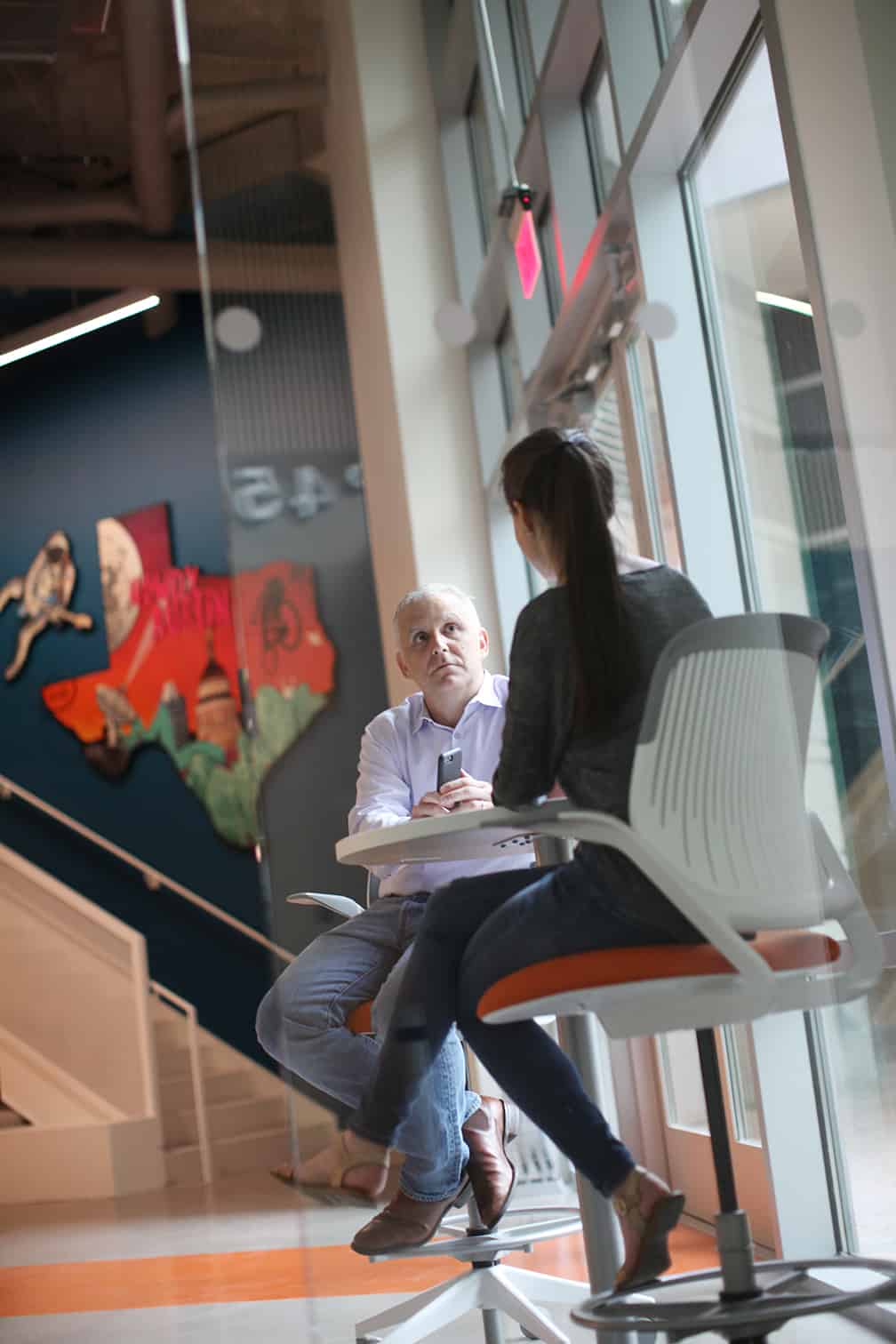 “He definitely does not want us to be holed up in our offices,” said Patrick Fraser, a risk management and compliance analyst who was the first Austin employee. “Sometimes we go out and explore and learn about Austin together. He loves this city, and he wants his employees to love it as well.”

That starts with the building, a former upscale fitness center that Colaluca helped redesign. He laughingly calls it his crowning achievement, “because nobody thought I had any feng shui.”

The space – with its floor-to-ceiling windows, moss wall, bright orange walls, loft spaces and glass conference rooms – was designed to serve not only as an inspiring workplace, but a recruiting tool.

The 21 employees who so far make up the Austin office are young, and that’s no accident. The goal is that new college graduates will comprise half the office’s workforce.

“It’s a bit of an experiment, and it’s a big departure from the rest of Viasat,” said Colaluca. “We could have done the corporate suburban campus. But that’s not going to target the demographic. We figured they were more apt to be in the urban environment. And college kids and recent college grads like to live in college towns.”

The Austin office is focused on cloud, infrastructure and security engineering, and Colaluca aims to recruit students majoring in those areas from his alma mater.

UT-Austin’s Cockrell School of Engineering ranked 11th nationally in U.S. News & World Report’s 2017 Best Colleges list, and in the top 10 of the 2017 Center for World University Rankings. In 2017, the university opened its new Engineering and Education Research Center, which aims to keep UT-Austin among the top engineering schools in the world.

“He’s not only a boss, he’s a buddy. He’s somebody that can listen to you, and he’s open to ideas so you don’t feel intimidated by him. I think people think that he’s cool.” —Security engineer Gloria Chauskey

If current employees are an indicator, recruitment won’t be an issue. It’s not just the location, the office design, or the work that brought them to and keeps them at Viasat. It’s Colaluca himself.

“He’s not only a boss, he’s a buddy. He’s somebody that can listen to you, and he’s open to ideas so you don’t feel intimidated by him. I think people think that he’s cool,” said security engineer Gloria Chauskey. “He’s very aware of the cultural aspect of Viasat. He tries at least once a month to have some event to get us away from work for a few hours and socialize.”

The Austin office offers a combination of private offices and collaborative work areas, and Colaluca is rarely found in his corner office.

“He always sits in the open area so people can come to him with questions, suggestions, talk about life, whatever they want,” Chauskey said. “He’s very approachable.”

Other employees echo that sentiment.

“You hear about the whole open-door policy for executives, but the fact that he sits in the open area the majority of the time, being one of us, is a testament to how he actually operates,” Fraser said. “He knows he’s this high-profile person at this company but he doesn’t view himself as being any different than anyone else.”

That company-wide emphasis on working as a team and its de-emphasis on titles is among the things Colaluca loves about Viasat, and it’s what he tells potential future staffers.

“What I usually tell people to sell them on the company is that employees who are really motivated can influence what the company does in a meaningful way without having to have a huge title, a big budget or a large staff,” said Colaluca, who’s worked at Viasat for 12 years. “The other thing I would say I like about Viasat is we generally tackle hard problems. I admire that willingness to wade into areas that are pretty tough to deal with.”

Austin is among four of Viasat’s newest offices; all are in cities that Colaluca said he and some of Viasat’s other executives believed would be future engineering centers of excellence – areas leading the way in engineering and technology. The others are in San Jose, Boston and Seattle, all in downtown locations.

The Austin site is expected to grow to a staff of 50 by mid-2019. When it does, Viasat will open an identical office just across the street.