How to outfit corporate aircraft with the right connectivity solution

Picking the right provider to get your business aircraft online can be a tricky process, but keeping a few basic facts in mind can make the decision a little easier. 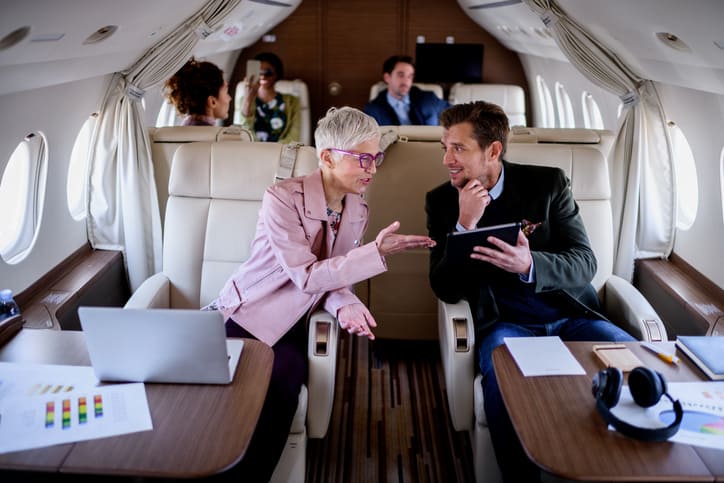 The decision to purchase a pre-owned corporate aircraft requires the assessment of a myriad of factors — everything from the plane’s technical specifications to the color of the carpet. Whether it’s an owner-flown six-seater, or a long-legged, large-cabin airborne palace, the jet must fit the mission for its owners, operators and passengers.

To create a fully mission-capable aircraft, it’s now an expectation that passengers and crew will be able to connect to ground-based data services and the internet, while comfortably cruising at 41,000 feet.

For passengers to be satisfied, the on-board connection must come close to matching the experience on the ground. But getting that capability has become a challenging decision-making process for many owners and operators.

With an increasing number of options available for connectivity, the first step in deciding on a system and provider should start — just as in the purchase decision — with the plane.

Connectivity to match the aircraft

The physical specifications of the aircraft are a key element of the connectivity decision. A smaller aircraft can usually only accommodate blade-type antennas, such as those used by ATG or low-speed L-band services.

While more compact satellite antennas are on the horizon, today, only aircraft in the size range of the Cessna Citation X to super-midsize and larger can be fitted with a Viasat Ku, Ka or hybrid satellite antenna.

The antenna is just one part of the equation. There needs to be space for the electronic components that complete the solution, whether located inside or outside of the pressurized cabin. The electronics may be rack-mounted or located in a baggage compartment, and consideration has to be given for the wiring that connects all of the systems.

But operators should always consult with their maintenance provider to determine what equipment can be installed in their jet.

Technology to fit the need

A solution for small aircraft that fly over the continental United States can be an ATG service, with a network of ground-based towers. But once a mid- or large-cabin jet heads out to sea on a trans-oceanic route, ATG simply ceases to work.

That’s when satellite comes into play. A satellite solution will keep a plane connected from ramp to ramp, at any altitude, almost anywhere in the world, and Ku- and Ka-band satellite services can provide a stable, high-bandwidth connection.

Viasat’s newest evolution of its Ku-band network requires just a small antenna installed on the top of the jet’s tail fin. Wiring from the antenna feeds the system’s electronics, which is made up of just three, line replaceable units (LRUs), located in the cabin, or the plane’s avionics bay.

Other satellite providers have different equipment requirements downstream of the antenna. Some will require five or six LRUs, or perhaps larger components that can only be installed in the luggage compartment. An operator should carefully evaluate the technology footprint, and the tradeoff against valuable avionics or baggage space. If the equipment can live outside the pressurized cabin and not take up valuable luggage space, that’s a win — and something nearly every principal will find interest in.

The ability to easily upgrade a satellite service is another important factor to consider. It makes little sense to commit funds and resources to a solution that doesn’t show a clear upgrade path, or one that isn’t future-proofed.

At the same time, an upgrade has to be easy. It shouldn’t require the virtual disassembly of a plane to install new gear and wiring.

Recognizing the importance of minimal aircraft downtime, Viasat has developed forward-compatible equipment to make the upgrade from its Ku-band service to its more advanced Ka-band solution a simple, two- to three-day process.

Owners and maintenance teams should also evaluate the available support and service packages. Nobody wants to have a lengthy aircraft on ground (AOG) situation.

Coverage, while important, shouldn’t be the key factor in deciding an in-flight connectivity service provider. Yes, it’s important to know about the number of satellites in the network, or where the signal in a satellite’s network can be received — because you want to ensure where you typically fly will be covered in the footprint. But maybe even more important is the capability of the network, its speed and its capacity. This is critical because the satellite’s network footprint could be global, but if the service provider doesn’t have enough capacity, you won’t be able to be productive. Capacity is what enables principals, the cockpit and crew to do more onboard.

There are hundreds of communications satellites in orbit, with thousands more planned for future networks in low-, medium- and high geosynchronous altitude orbits. Service providers both own and lease this orbital capacity. It’s important for corporate aircraft operators to find out how that “space segment” translates into capacity, and what applications you can perform with that capacity — especially in congested air corridors.

Also, questions to ask include: what kind of redundancy is built into the coverage? How responsive is the operator to outages? Are there new satellites in orbit, or perhaps soon to be launched, that will improve overall coverage and capacity? Operators need to be thinking long-term, because it’s too expensive to install one system today, only to have to replace it in a few years.

Viasat is recognized industry-wide for its commitment to having a tremendous amount of capacity in space — whether that’s in its owned Ka-band satellites; by utilizing bandwidth on multiple leased Ku-band satellites; or a combination of the two. Again, the importance of capacity is the more you have, the more principals, cockpit and crew can do in the air and in congested airspaces.

Specifically, looking at Viasat’s Ka-band network, the Company has consistently been focused on having the most capacity in space for the total aviation market — from across business and commercial to government segments. Currently, Viasat offers nearly 500 Gigabits per seconds (Gbps) of total network capacity from North America to across the Atlantic Ocean to Europe. The next largest global satellite service provider has less than 30 Gbps for their total network. So if capacity equals doing more on the plane — from streaming and taking HD conference calls — you need to ask: Which would you prefer?

Along with the evaluation of technology, a savvy owner should look closely at the ongoing costs for data connectivity. Just as in the mobile phone sector, there are different plans available from service providers.

Optimizing the plan to meet the aircraft’s mission is critical, while recognizing that plans for different technologies and services may vary from a per-megabyte usage model to monthly flat-rate packages.

Flat-rate packages are far easier to build into a budget, in large part because of the challenge of determining the expected consumption of data, based on the variable size of emails, attachments and websites. If you plan to do any kind of video streaming or teleconferencing on board, you’re going to need a robust service that offers plenty of data.

For private or corporate operators, Viasat recommends flat-rate monthly packages, as they removed surprise overage charges. For charter operators, Viasat offers hourly options, since that is how the end customer is billed.

Aero-connectivity is an exciting and fast-moving part of aviation, giving new opportunities for advanced safety-of-flight services, and an enhanced passenger experience. The key is to recognize your application needs to ensure you ask the right questions when evaluating a long-term connectivity partner.

This story originally appeared in the April, 2018 issue of AvBuyer Magazine.