How the digital divide leaves Americans behind with slow internet

While many people in urban areas enjoy today's fastest internet service, those in rural areas and other places outside cities have had limited options. 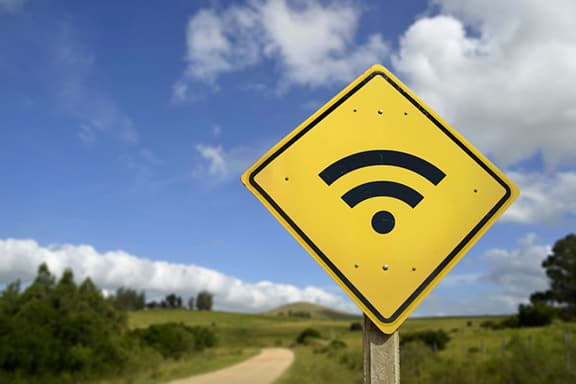 While some strides are being made to close the digital divide separating those with good internet from those without, there are still tens of millions of Americans with slow or no service. While many Americans enjoy download speeds of up to 100 Mbps or faster (enough to run several devices in your home at once), more than 34 million people don’t have access to broadband — or speeds of at least 25 Mbps. And 4.6 million people get less than 4 Mbps, very slow by today’s standards.

This divide is holding back people, as well as the communities in which they live and work. Rural connectivity is a problem — people in rural areas tend to be behind the divide, with only 63 percent connected to broadband, compared with 96 percent of urban dwellers.

It’s a pressing issue because fast, modern internet can mean access to a quality education, a college degree, a good job and specialized healthcare — not to mention the myriad of other information and entertainment options available online.

Technology can be the key to changing the lives of those who live in rural and growing areas of the country. But they need access to those technologies to make that happen.

Broadband makes so many things possible:

Terrestrial-based ISPs — such as cable, fiber and ground-based wireless — face numerous challenges delivering broadband to rural and growing areas. The cost to build network infrastructure, continual maintenance, and uneven terrain are just a few of them. And it takes time to build in new areas, while people are left waiting. Installation of fiber and cable infrastructure to reach every home isn’t financially viable in places where homes are few and far between.

Places like Apache County, Arizona, with just six people per square mile, get an average internet speed of less than 1 Mbps. In Saguache County, Colorado, a sparsely populated valley between two mountain ranges, just 5.6 percent of the population gets broadband, and many people get no internet at all.

Internet service from satellite, on the other hand, addresses many of these problems. Viasat provides the technology that can reach nearly ever corner of the U.S. with speeds from 25 Mbps all the way up to 100 Mbps in some areas. And unlike other providers looking to get government funds to help them build out service, Viasat’s infrastructure is already in place in the form of satellites and a ground network that needs only a small dish on the home or office to connect.

Let’s take a look at the impact that the lack of internet and the technology it can deliver has on some of these people and places.

Right now 11 million students attend schools without broadband. On top of that, many of those students don’t have internet access at home, creating a homework gap. Two-thirds of rural schools rely on distance learning.

Libraries are at the heart of many communities, large and small, and offer so much more than books and DVDs. Wi-Fi is a vital link for students to do homework and for adults who need access to job applications and other services.

Technology and fast internet speeds are also changing the face of healthcare. Telemedicine brings the doctors to the patient, wherever they are, via video chat. So access to reliable, high-speed internet can be lifesaving, considering the shortage of doctors in rural areas. But streaming video requires higher speeds and bandwidth to be effective, and that’s what Viasat is bringing to these areas.

Tribal lands in the U.S. are also underserved with internet. More than 1.1 million people live on these lands, without access to 4 Mbps, much less broadband. Many have no internet at all, and no local Wi-Fi hotspots.

Globally, only one half of the world’s population has internet. That means 3.5 billion people are left in the dark, as far as advanced technology is concerned. So, there is a large global market that could be served with satellite very soon — much faster than terrestrial ISPs can build the infrastructure and deliver the service.

Already, ViaSat is delivering service to some of the 35 percent of people in Mexico who have limited or no internet access. And Viasat’s innovative cost-sharing method is making broadband not only accessible, but affordable for those in developing nations. Instead of every household with a satellite dish, Viasat is building village Wi-Fi, hotspots where locals buy access to satellite-delivered internet, when they need or want it. It’s an inventive approach to connecting undeveloped countries with the rest of the world.

The power of satellite to address this problem globally is finally starting to be realized, with a number of initiatives in the works. Viasat is at the forefront of this effort, with construction on a constellation of satellites aimed at covering most of the globe in the next few years. The first of these ultra-powerful ViaSat-3 satellites is slated to launch in 2020, bringing service to most of North and South America. Another launch in 2021 will add capacity over Europe and Africa, with a third planned to connect Asia and the Pacific.

To truly bridge the digital divide around the world, it will take a concerted effort using a variety of technologies. Satellite’s ability to offer fast service where others can’t is why Viasat will be a big part of this story going forward. 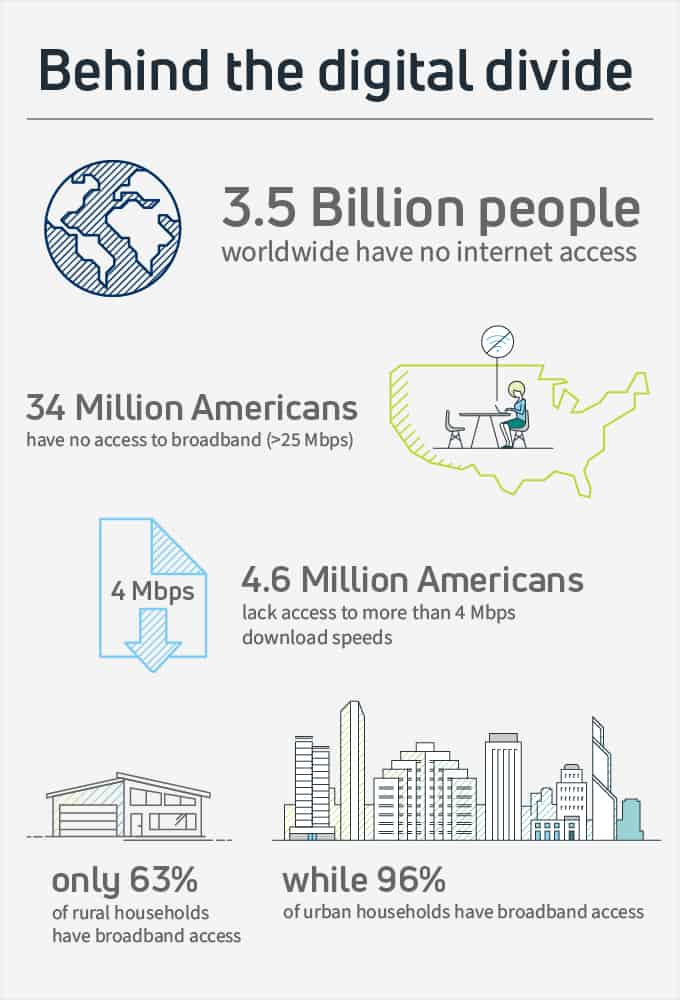