How satellites are affected by the spring and autumn equinoxes

All geostationary satellites move out of sunlight for varying periods of time during the spring and autumn equinoxes. Here's a look at how we manage that.

When you picture a satellite, chances are the main image that comes to mind is of the large solar arrays that collect energy from the sun to power the satellite. Most of the time, they’re in sunlight 24/7, but during the spring and fall equinoxes, our satellites have periods where they’re not always in sunlight. Our satellites recently went through this period, so here’s an explanation of what happens:

As I mentioned above, geostationary satellites are situated above the equator. However, the earth’s poles, along with its equator, are tilted by 23.5°, which is what produces the seasons. This 23.5° tilt also defines the limits of the Tropic of Cancer and the Tropic of Capricorn, located at 23.5° north latitude and 23.5° south latitude, respectively.

Because of this tilt, most of the year a geostationary satellite will orbit above or below the earth’s shadow and remain in sunlight continuously. But twice each year, at the vernal equinox (March 21, beginning of spring) and the autumnal equinox (around September 22, beginning of autumn), the sun will illuminate the northern and southern hemispheres of the earth equally, which results in the earth casting a shadow through the geostationary arc (or orbital path). 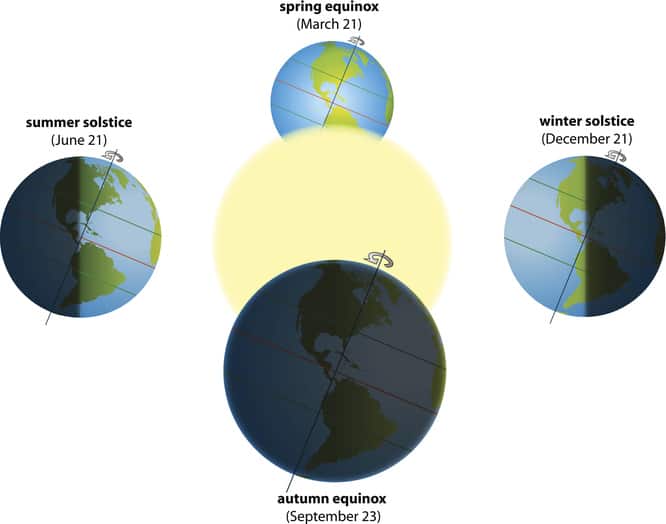 A look at how the Earth's orbit around the sun affects the seasons. The position of the Earth in relation to the sun also impacts the amount of sunlight reaching satellites in geostationary orbit during the equinoxes — but not the solstices.

This is why satellites in geostationary orbit will spend some time in the shadow during what we call “eclipse seasons.” Each eclipse season lasts 44 days, during which the time that a satellite spends in eclipse (shadow) builds gradually from about a minute or two at the start of the season, to a maximum of 72 minutes at each equinox. It then gradually retreats over the next 22 days, at which point the solar arrays are again in the sunlight on a 24x7 basis.

Because our satellites depend on electric power for all functions, what happens during the eclipse periods when a satellite’s solar arrays cannot generate electric power?

All of our satellites use lithium ion (Li-Ion) batteries, similar to the batteries in our smartphones and laptop computers. These allow our satellites to function through eclipse periods, when the satellite’s solar arrays are blocked from sunlight and cannot produce electricity. Our satellites’ batteries have to be powerful enough to provide energy for all of the satellite’s normal functions, including the communications, propulsion for station-keeping, telemetry and control functions, heaters, navigation, etc. The batteries must also be able to accommodate the satellite’s intended full load (delivering internet, in our case), along with some extra power (known as margin) to provide some buffer as the satellite’s battery capability degrades over time (again, just like your smartphones do).

Viasat constantly monitors the health of each satellite’s electric power subsystems, including the solar arrays and batteries, to ensure that we can provide the services from the satellites that our customers expect. We always take eclipse season requirements into account when designing new satellites to make sure the satellite can provide all of its intended services, uninterrupted, over its lifetime on orbit.