How satellite internet will help connect the world

As the need for connectivity continues to grow, Viasat is driving industry innovation to bring high-speed broadband to the world 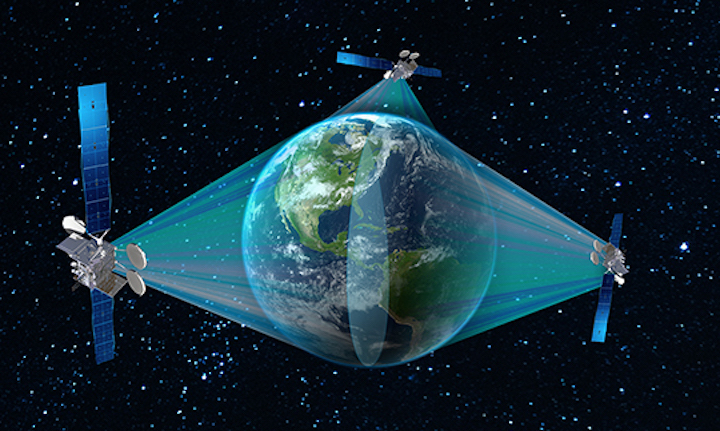 This illustration of the upcoming ViaSat-3 constellation shows how just three satellites in geostationary orbit can cover most of the Earth.

Electronic communication goes as far back as 1836, when Sam Morse invented the telegraph. But it wasn’t until the early- to mid-1900s when the demand for connectivity started to drive innovation at an ever-increasing pace. From the telegraph to the telephone, from AM radio to color television, and from internet over legacy phone lines to wireless broadband, new devices and new methods of communication have changed from modern marvels to must-haves.

At the same time, simple planetary physics throws up some serious barriers to worldwide terrestrial communication. The curvature of our planet means that line-of-sight wireless transmission is inherently limited to relatively short distances. And the alternative land-based solution — running lines to every home, school, business or organization — typically only works well if there are enough user terminals in a given area to justify the great infrastructure expense.

To meet the increasingly complicated demands of the 21st Century, we need to augment those terrestrial limitations with a greater reliance on space-based communications.

The promise of satellites as communication tools became quickly evident during the flight of Sputnik in 1957. Not wanting to be outdone at the height of the Cold War, the U.S. government quickly began testing both passive and active communications satellites at various altitudes. Within a decade, multiple government and commercial satellites were launched into geosynchronous orbit — including Intelsat 1, a revolutionary device that heralded the use of space as a key method of distributing audio, video and data.

Some of us may remember the early days of services like satellite TV service at home. Despite the massive pole-mounted dishes it required, satellite TV was hugely popular when it first became available. It seemed like a window into a previously hidden world of entertainment for many. Eventually, subscription-based satellite TV with (thankfully) smaller dishes became a welcome alternative to cable for many suburban and rural Americans. But those first few years really seemed like the dawn of a new era.

Fast-forward to the early 2000s, when another tech revolution had a similar impact: high-speed internet. From the ocean to the prairie to the mountains, pretty much everyone wanted to ditch the 56k-modem-and-phone-line thing all at once. Early satellite internet may not have been much more than a few megabits per second speed-wise, but it was still a lot better than dial-up.

Even today, hardwired broadband connections like DSL, cable and fiber still can’t (or won’t) go to many rural households and businesses because of physical limitations and budgetary constraints. It’s simply not cost effective for these ISPs to run a line to an area with only a few customers. The need to provide broadband for communities outside the cable and fiber zone became even more apparent with the pandemic, when millions had to rely on their home internet for work, school, shopping, healthcare and much more. Rural residents with fewer viable tech choices than their city cousins illustrated the fact that our world remains much less connected to high-speed internet than we’d perhaps realized.

Satellite internet fills this gap — often called the “digital divide.” The speed, capacity and reliability of satellite-based internet providers have come a long way since 2004, when WildBlue (acquired by Viasat in 2009), began offering internet service off the Anik F2 satellite.  In 2011, Viasat launched its first ultra-high-capacity satellite, ViaSat-1, ushering in a new era of higher speeds and more data to keep up with the growing trend of streaming media.

Aided by the addition of even more capacity from ViaSat-2 (2017), Viasat customers today enjoy speeds up to 100 Mbps in some areas, with data plans aimed at the streaming age. Soon, Viasat service is expected to take another huge leap in performance with ViaSat-3. This global constellation of three satellites is aimed at providing even faster speeds and more data capacity to areas that continue to be ignored by traditional wired broadband providers. It will also help bridge the digital divide in countries around the world.

Of course, satellite broadband is valued in many environments beyond rural households and businesses. Travelers trust satellite-driven connectivity on cruise ships and airliners to stay in touch en route. Militaries, businesses large and small and any other individual or organization needing connectivity where terrestrial service is absent increasingly depend on this critical space connection. Even ultra-modern line-of-sight 5G networks rely on satellites in some areas to do the heavy lifting of backhaul — the movement of content from the user back to the network.

As communities around the world demand more and more access with greater capacity to transmit ever-growing amounts of data, satellite is poised to play a key role in making it happen. Born during the Cold War and proliferated at the turn of the millennium, satellite-based communication technology is helping connect the world in ways we couldn’t imagine even a few short years ago.