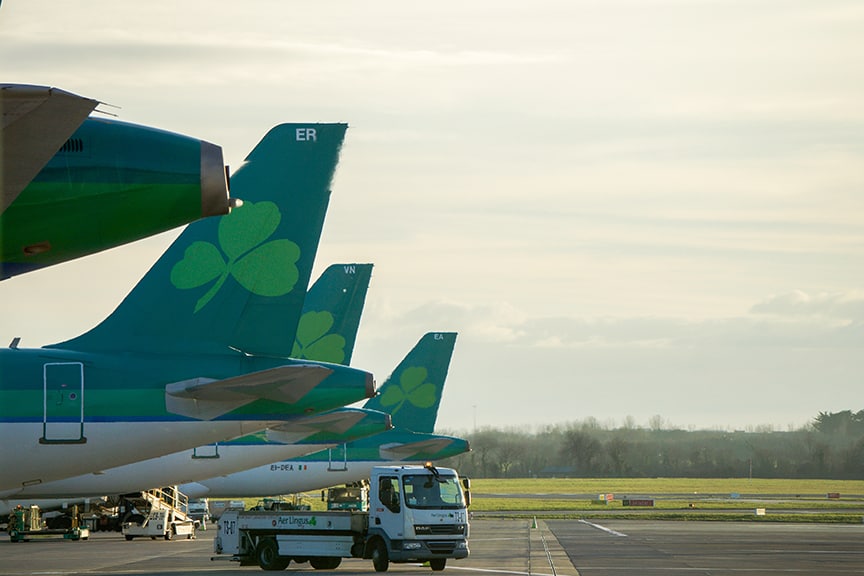 Not so long ago, all airline pilots had to carry a flight bag, containing up to 88 pounds of aircraft and operational manuals on every flight. The launch of tablet devices opened up a whole new way to transport and access documentation, allowing airlines to go paperless.

The electronic flight bag (EFB) is a software application — accessed on an iPad, Windows tablet or laptop — that delivers many benefits both to flight crew and flight operations. Central to the EFB is the digitization of manuals — and that’s what Viasat AeroDocs delivers, in native iOS, Windows and web applications. Viasat AeroDocs gives the airline complete control over the editing, distribution, tracking and viewing of digital manuals, with benefits in easier regulatory compliance, labor efficiencies and reduced fuel costs.

So, what does it look like for an airline to make this switch? Viasat recently helped Irish airline Aer Lingus do just that.

In deciding to deploy an EFB to flight crews, the Aer Lingus project team knew there would be major benefits, including the paperless cockpit, weight reduction, and improved distribution of content. More control over content distribution would, in turn, support better compliance and the streamlining of processes. The team decided to break the program into different phases to minimize the risk to each phase, allow the airline to assess feedback for each individual phase, and maximize the cost effectiveness of implementation.

The first phase was to implement an electronic document authoring and content management system and to assess the benefits of digital delivery. It was during this phase that Aer Lingus began to work with Viasat. The first decision was to replace existing portals with a new content management system (CMS), so they could move to electronic manuals and a simplified editing process.

With the implementation of this first phase a success, the airline quickly adopted Viasat software to support all portals in Aer Lingus and the staff intranet.

Within 18 months, Aer Lingus had digitized most of the key manuals including:

Finally, Aer Lingus assessed the many benefits from this phase of the program:

These encouraging results added confidence as the team moved to the next phase.

The second phase of the program was to implement EFB using Windows. The first need was for a documentation system available on the ground, which they achieved with the new portals. By the time they set out on this second phase, every part of the airline had a portal accessible via intranet.

The next step was to bring this all on board the airplane. Based on the successful experience they’d had with the ground portals, they wanted to introduce the EFB and bring onto it the Viasat AeroDocs manual distributor and viewer system.

As far as implementation, they wanted to achieve some specific cost savings —including a reduction in the cost of producing paper manuals; a reduction in the cost of distribution of manuals and notices; and some cost improvements on the performance side. This came from the ALPS performance calculator allowing them to use, for instance, optimal flap settings and better flexible take-off thrust figures for reduced power take off.

On the corporate side they needed to address some extra details like an electronic journey log, as well as letting the flight crew enter reasons for delays. All of that aimed to support better data gathering and analysis tools.

On completion of the successful implementation phase, the project team got a lot of feedback from crews. One request was to have some information available off the aircraft. The EFBs were located in the cockpit, but the flight crew wanted access to items like the flight briefing packs in advance of arriving in the cockpit, or even arriving in the operations area at the airport.

Overall, the EFB program in Aer Lingus has been a success. It was a pleasant surprise for the airline when the crews requested the information to be available outside of the cockpit. The airline had decided to make the actual EFB devices “aircraft assigned” to give them better control over the ship’s library and to ensure that the devices were always with the aircraft to avoid any delays in dispatching. However, they’ve revisited this to add in pilot mobility.

With the EFB in place, they were able to eliminate paper manuals removing up to 88 pounds of weight from each aircraft and generating significant, measurable fuel savings.

In addition to simplified and streamlined document handling, the EFB solution from Viasat saves up to 88 pounds of additional weight on every flight.

Gary Byrnes works on the Flight Operations team at Viasat’s Commercial Aviation business in Dublin, which delivers operational software and connected flight deck services to airlines around the world. In his spare time, Gary writes thrillers.