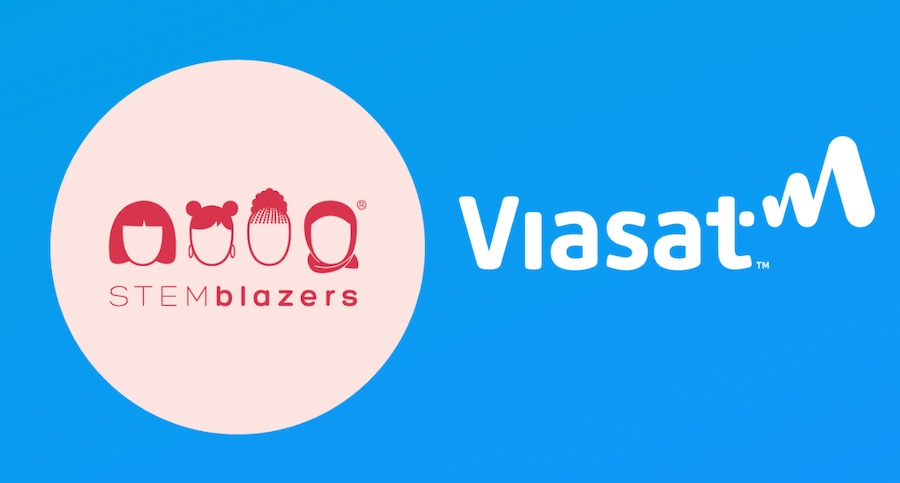 STEMblazers founder and former mechanical engineer Wendy Merchant is driven by a goal to balance the gender scales in STEM-related industries. When she met Viasat employees Shelly Sousa and Emily Fitzgerald, she found kindred spirits.

The two Viasat Denver employees have spent the last several years volunteering their time to help grow STEMblazers. Systems analyst Sousa, formerly chair of the group’s board, serves as an advisory board member. Senior video content creator Fitzgerald is a five-year volunteer whose videos and photography help spread the message of the Denver-based nonprofit, which introduces girls to women working in STEM and hands-on experiences.

Most recently, they’ve helped produce a podcast, hosted by two of the organization’s earliest members.

“The general message we’re trying to convey is that you can do it,” said podcast co-host Madison Tenney. “I say this at the beginning of every episode of the podcast: What STEMblazers did for me overall is give me the confidence to pursue what I wanted to pursue, to put myself out there, meet people and network. Having that confidence is key.”

Hearing statements like that is music to Merchant’s ears, since lack of confidence is often the reason many girls fail to pursue STEM careers.

Studies show that before they hit their teen years, young boys and girls are equally likely to believe they can succeed in a STEM career. But when girls enter their teen years — about the time many also make critical career choices — their self-confidence often falters.

In the U.S., women make up 28% of the STEM workforce. And college trends don’t show that changing fast, with men vastly outnumberering women majoring in most STEM fields.

An effective way to counteract the sense of doubt common to many girls is to expose them to role models – women working in STEM fields – and hands-on STEM experiences, Merchant said.

“There are so many awesome young women and talented girls who don’t have that support,” she said. “We connect all these amazing women working in STEM with these students so they can see what is possible.”

STEMblazers was founded in Colorado in 2014 as Girls in STEM. The program runs throughout the school year, and includes biweekly meetings, guest speakers, field trips to tech offices, job shadowing and mentorship opportunities. They also provide guidance on applying for scholarships and internships, as well at networking and other career skills.

Sousa and Fitzgerald are among a growing group of about 30 STEMblazers board members, volunteers and chapter leaders. Several companies — including Viasat, Burns & McDonnell and Lockheed Martin — also act as corporate sponsors.

Merchant has always been keenly aware of the dearth of women in her field. But she first saw the roots of the issue several years ago when her then 10-year-old son became involved in STEM activities.

“I realized there were very few girls, if any, engaging and signing up for these things,” she said. “After doing more research, I realized the ratio of men to women hadn’t changed in engineering for the past 35 years.

“I’d found my calling. I decided I wanted to throw all of my time into this. I do not practice engineering anymore. I love it, but I love this more. I get so much joy and fulfillment out of it, and there’s definitely a need.”

That’s where help from women like Sousa and Fitzgerald has been vital. Both know well the value of role models.

Though Sousa fell in love with computers as a child, she didn’t pursue that career path immediately. A series of events led her to a temp job that sparked her tech career.

“There’s a quote, ‘You can’t be what you can’t see,’” she said. “What if I had known as a teenager what was available to me — how much would my life have changed? Without friends or family in the industry, it took me so much longer to build up my network.

“Now these students have people like Emily and me they can reach out to.  If they want to work in our industry, they know who we are.”

Fitzgerald can also show students they don’t have to be engineers or scientists to work in a STEM field. As a member of Viasat’s video team, she creates internal and external videos and marketing content on all segments of the company’s business.

“I have to understand everything because I’m telling a story,” she said.

But in college, Fitzgerald says she struggled to find her path. She hopes to shortcut that process for the young women in STEMblazers.

“I have a career I really enjoy in tech, and I went to an engineering school — but as someone who wasn’t in engineering,” said Fitzgerald, who earned her degree in computer graphics technology from Indiana’s STEM-focused Purdue University. “I found an outlet for telling stories through a technical capability, but I had to figure it out on my own. Being able to share my own experience has been really cool.”

It’s also having the intended effect, Merchant said. Not only has STEMblazers built confidence in girls, it’s inspired many of them to pursue STEM careers.

“She went to school in an under-sourced community, and she didn’t realize the possibilities for her,” Merchant said. “STEMblazers gave her the confidence to take that chance and apply. Knowing we’re empowering them and helping them become aware of what’s possible – that just gives me chills.”

The STEMblazers podcast is available on Apple Podcasts and Spotify.