Handheld Link 16: A life-saving radio for our troops

Viasat’s AN/PRC-161 HHL16 radio provides a direct tactical data link between troops on the ground and Close Air Support above. 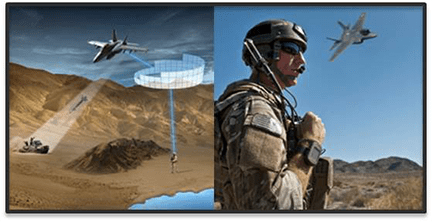 Close Air Support: In military tactics, Close Air Support (CAS) is defined as air action by fixed or rotary-winged aircraft against hostile targets, that are in close proximity to friendly forces, and which requires detailed integration of each air mission with fire and movement of these forces. - Wikipedia

In October 2014, Viasat began development of a Handheld Link-16 (HHL16) radio that was crypto-modernization capable. This radio would be an important key enabler for the Close Air Support mission. A short 17 months later, the radio underwent its first operational assessment, and in less than two years would be entering production.

Viasat’s AN/PRC-161 HHL16 radio was designed to provide a direct tactical data link between Joint Terminal Attack Controllers (JTAC) and Fighter/Attack aircraft enabling Digitally Aided Close Air Support (DACAS) capability. Why is it so important that forces on the ground be digitally connected to planes in the air? The answer is simple: Without this direct digital connection, deadly mistakes can happen.

A friendly fire incident in Afghanistan that killed U.S. Special Forces and other American soldiers, along with an Afghan soldier, was the result of poor communication, inadequate planning and several other mistakes, according to the results of a U.S. military investigation released Thursday.

The June 9, 2014, airstrike marked one of the ugliest friendly fire incidents in more than 12 years of U.S. military operations in Afghanistan. A B-1B Lancer bomber dropped its ordnance on five U.S. soldiers, including members of an elite Special Forces team. – The Washington Post

In the heat of battle, stressful situations exacerbated by poor communications capabilities may lead to friendly fire, or fratricide, incidents.

On the battlefield, one thing is imperative above all else: situational awareness or “SA.” Commanders need to know friendly and enemy force locations, as well as the location of available aircraft that can provide CAS. These position locations change dynamically in combat, so having real-time SA is critical to avoid fratricide.  Without real-time SA, a commander’s ability to engage the enemy with CAS is diminished dramatically, leaving them vulnerable to errors.

CAS platforms were already using Link 16 tactical data links to maintain Air-to-Air SA with other airborne assets, but troops on the ground had no way to talk to them. Instead, ground forces were forced to radio back to a JTAC support element, which then relayed the information via voice to the planes.

Relying on voice communications with multiple links meant a significant amount of time was lost, and the CAS planes had to rely on voice-relayed locational grids for targets rather than digitally assured locational targeting sets.

The HHL16 radio was designed to resolve the problem of ambiguous analog messages by directly connecting the JTAC to the Link 16 network already in place to support aircraft SA, providing precise, mathematically certain target acquisition.

Viasat’s AN/PRC-161 has successfully completed all testing requirements and has now entered the production phase for the radio. The AN/PRC-161 is ready to deliver on its promise of real-time air-to-ground situational awareness.

Viasat’s Handheld Link 16 AN/PRC-161 radio is yet another example of how Viasat is creating business opportunities through technology innovation while bringing new capabilities to our nation’s warfighters; enabling new mission constructs and operational effects, while dramatically increasing safety and mission assurance directly at the tactical edge.