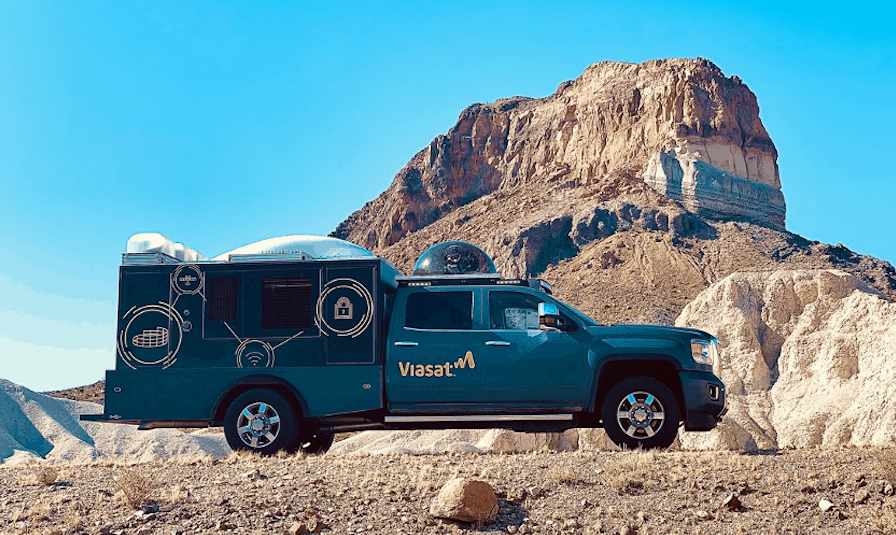 By empowering armed forces with the ability to seamlessly roam between military and commercial communication networks on the battlefield, Viasat’s Hybrid Adaptive Network (HAN) not only extends levels in survivability but also mission success.

Demanding such a capability to network together aircraft, ground vehicles and surface vessels across a contested environment, the U.S. Air Force’s innovation hub AFWERX down-selected Viasat from more than 300 submissions to demonstrate the HAN as part of its Joint All Domain Command and Control (JADC2) prototyping event.

The event was aimed at improving the situation awareness, rapid decision making and direction of forces across air, space, cyber, land and sea domains.

Originally scheduled to take place earlier in the year at AFWERX’s facility in Las Vegas, Viasat overcame significant operating restrictions associated with the COVID-19 pandemic to organize a  virtual marquee event illustrating how the HAN could ensure resilient communications during engagements with near-peer/peer adversaries.

Discussing the virtual event, Fred Taylor, Viasat’s vice president for space and cyber applications, explained how the HAN will provide armed forces with resilience and dynamic scheme of maneuver in contested battlespaces; assured dissemination of sensor data to warfighters at the tactical edge; and synchronized C2 in joint operations.

“JADC2 is the new way of war where armed forces must operate across multiple domains,” Taylor said. “Viasat has been doing this since 2002. Since then, the HAN has grown organically as a commercial capability that can be used by warfighters to maneuver across multiple satellite networks. This specifically applies to emerging concepts of operation being adopted by the military, so Viasat’s capability very much aligns with their top priorities.”

Viasat’s HAN, which provides warfighters with an agile, flexible and resilient capability, automatically alternates between multiple communications networks based on emerging threats and evolving mission requirements.

Describing how the HAN selects the best available network for warfighters based on mission needs, data rates, loading and capacity, Taylor said: “It weighs networks against missions, assigning them to appropriate multi-network terminals to provide the warfighter with the most optimal option. The HAN also selects the best network to maintain connectivity, even in the face of threats and disruption, seamlessly switching to alternative networks to maintain the mission.”

Such a capability allows warfighters to send data including intelligence reports and C2 updates to support a Common Operating Picture (COP) for those operating at the tactical edge, he said.

“In Afghanistan, for example, the HAN will assure connectivity in products for fires, C2 maneuver and assurance, allowing warfighters to remain connected to share data and get it to where it is needed. As missions change, the HAN can also be manually altered based on a commander’s imperative,” Taylor said.

Viasat’s demonstration to AFWERX, which was observed by senior leadership from the U.S. Army, Navy and Space Command, showcased the HAN’s ability to provide an open, multi-network, multi-orbit SATCOM enterprise. The goal is to leverage commercial innovation to enhance resilience, performance and warfighter effectivity across a contested, multi-domain battlespace.

The demonstration focused on engagements in contested environments where peer/near-peer adversaries employed sophisticated capabilities to deny kinetic and non-kinetic means of DoD force components. This included cyberattacks, destroyed satellites and reduced network capacity in addition to jamming of the electromagnetic spectrum.

“Our objective was to build resilience and deterrence by increasing the number of available communication transport layers,” Taylor said, noting that the demonstration roamed across eight different satellites, as well as multiple modems and waveforms. “Some were Viasat owned and others owned by third party partners, with the HAN manager making those selections,” he said.

During the demonstration, Viasat’s HAN proved its capability to:

Although the demonstration was restricted to satellite communications, Taylor explained how the HAN could, with additional development, be extended to integrate Wi-Fi extensions, LTE networks and, where necessary, Link 16 tactical data links.

“The HAN is not specific to any network. It will be able to connect to any IP-based network, if you have the appropriate terminal,” Taylor said.

Having proven its capability in the AFWERX demonstration, Taylor described how Viasat is seeking to enhance the HAN in the future.

“We want to roll out the HAN in a more expansive environment to include DoD networks. We also want to improve intelligence to make the system smarter, with more data-based and automatic selections of networks to allow weapon systems to be managed or supervised rather than additional burden by the warfighter,” he said.

Additional areas of interest include ongoing development of multi-network terminals as well as the introduction of third-party modems and waveforms to provide a greater number of options for more rapid and easier switching between networks.

“The HAN is a continually evolving capability,” Taylor said. “We designed an open architecture to accept new networks and systems as they become available — in addition to more sophisticated levels in artificial intelligence and machine learning to help it become more automated. We still have people in the loop, looking at how we can continually improve the enterprise to accelerate decisions and increase performance in an increasingly connected world.”