Gina Tuazon-Ayache: a living example of Viasat’s ‘chart your own course’ career philosophy 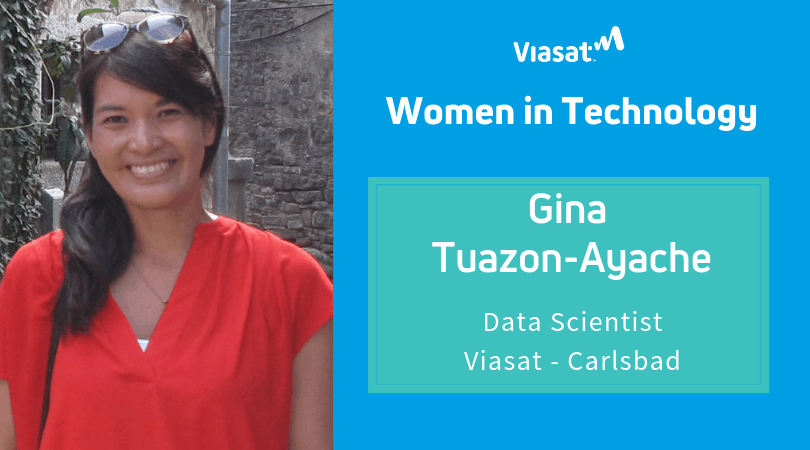 As a child, Gina Tuazon-Ayache watched her engineer dad repair cars in the garage and listened to his thoughts on politics and history – two subjects he loved.

“He was smart and a voracious reader,” said Tuazon-Ayache, who’s worked at Viasat as both an engineer and a data scientist. “The way he thought was passed on to me. During grade school, I was interested in almost everything, like he was. But when the time came to pick a major, I chose engineering because he had been one, too.”

Lucky for Tuazon-Ayache, working at Viasat meant she wasn’t locked into one area of interest. The company encourages employees to chart their own path, describing the myriad options under the Viasat umbrella as a career “jungle gym” instead of a ladder.

… seeing all the women working here at Viasat and in different roles – including technical and leadership roles – it’s amazing to me how the industry has changed and grown through the years, and I look forward to seeing more.”

Tuazon-Ayache took that to heart.

After working at Viasat for a decade as a senior programmable logic engineer, she transitioned to data scientist. Along the way, she earned a graduate degree from UC-San Diego in computer science — with a focus in data science.

“Going from hardware to data science sounds like a leap, but there are connections between the two – math, probability, statistics,” she said. “I really appreciate the support I had from my supervisor and team to go back to school fulltime and continue working. They trusted in me that I was making the right choice for myself and believed in me when I said that it would benefit Viasat, too.

“It was challenging to balance work and school. But everybody was very supportive, and I was able to work flexible work hours. I want people to know my story in case they also want to go back to school while continuing to work.”

A different way of thinking

The Philippines native has worked at Viasat 13 years, the first 10 as an engineer. A graduate of the University of California Berkeley, she started on the government side – the only side there was at the time, she added with a laugh.

In 2006, Tuazon-Ayache was among a wave of new hires prompted by growth in the government business, but few foresaw what lay ahead.

“When I started, nobody had any idea we’d be launching our own satellites or be a service provider,” she said. “There were only three buildings here on the main Carlsbad campus. It’s been an interesting journey to see the company grow in many different ways.

Much as she loved her engineering career, Tuazon-Ayache also wanted to explore other areas. So in 2014, she went back to school to earn her graduate degree. Machine learning and data science was an emerging field at the time that caught her interest.

It’s a choice she hasn’t regretted.

“It’s been challenging, moving from the types of problems I was used to as a hardware engineer to now; it’s a different way of thinking,” she said. “But as a data scientist, I think I draw more on broad knowledge and I get to collaborate within our team in ATG (data science) and with other teams, like Commercial Air analytics. That’s exciting for me.

“When you’re dealing with data, you’re a detective in a way; you have to have some kind of creativity. It’s a job that requires a lot of different aspects – starting with harvesting and cleaning data, and making sense of it. Then the next challenging part is finding what’s important within the data and trying to make predictions that will benefit the business.”

Tuazon-Ayache worked first on the commercial air segment of Viasat’s business, studying how airline passengers use the service. Her work benefitted not only Viasat but the airlines who use the service on their planes.

“We found that when in-flight connectivity is free, people use our service much like they use their connectivity at home, which is a great thing,” she said. “And we see variability in patterns depending on hour of day, day of week, or even season of year, and route.

“That kind of information helps us in terms of how we manage our network, even at the application level,” she said. “But our different airline partners have different offerings for their passengers. So we can make recommendations to them on how to better deliver the product to the customers.”

The residential side offers Tuazon-Ayache a whole new set of challenges and learning, with a focus on information that will help retain customers.

It appears a perfect match for Tuazon-Ayache, who doesn’t shy away from tough problems. A year ago, she took on a new challenge – motherhood. Tuazon-Ayache and her engineer husband – whom she met on a UC-San Diego softball team – are the parents of 1-year-old twin daughters. 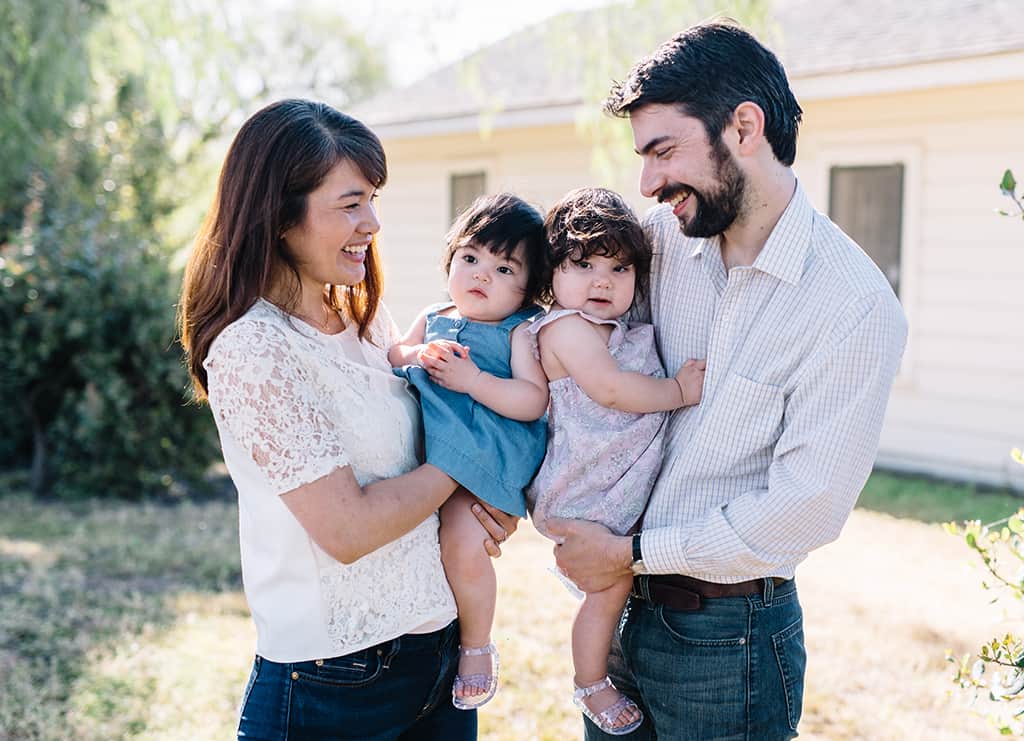 Gina Tuazon-Ayache with her husband, Maurice, and twin 1-year-old daughters Hannah and Ella.

Though the issues are very different, the juggling Tuazon-Ayache’s doing now feels vaguely familiar, she said.

“Just as I did when I was a graduate student, I’m finding another way to balance,” she said. “Then it was school and work. Now it’s being a new parent and work. I’m trying to give each their due.”

The combination leaves scant time for anything else. Because the babies are teething, that sometimes even includes sleep.

“Motherhood has been trying in many ways, but also super rewarding. They’re learning something new every day. Catching those moments and enjoying them makes it all worth it.”

Tuazon-Ayache sees a bright future, not only for her continuing career with Viasat but for her daughters.

“There really seem to be more women coming into technology and especially now that I have two daughters, it’s even more meaningful to me,” she said. “The ATG data science group I’m part of is about a third women. It’s great to see.

“In my undergrad, there were hardly any women on the electrical engineering side. There could be 400 to 500 students in a classroom and I’d be among a handful of women. It made it so much tougher not having folks similar to me going to school. But now, seeing all the women working here at Viasat and in different roles – including technical and leadership roles – it’s amazing to me how the industry has changed and grown through the years, and I look forward to seeing more.”