Inspired by a childhood story, Levine followed her aerospace dreams into the aerospace industry. Her career path eventually led her to Viasat, where she’s helping to design the ViaSat-3 satellite constellation. 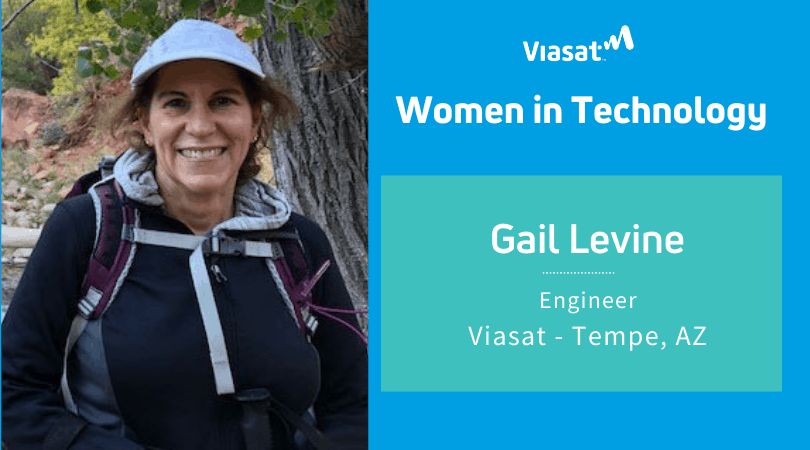 As a young girl, Viasat engineer Gail Levine was inspired by a fictional teenaged girl. Holly was the protagonist of “The Menace from Earth,” a science fiction short story by Robert Heinlein about the adventures of the aspiring starship designer. Today, Levine is instrumental in the design of the ViaSat-3 satellite constellation.

“I always wanted to be Holly; as a child, I thought that would be a cool thing to do,” Levine said.

But she went far beyond young Holly’s aspirations. Before coming to work at Viasat, she worked at multiple aerospace companies, including Boeing. There, she helped design ViaSat-2.

“To think something I’ve worked on has actually made it into space is very exciting – knowing you had a hand in the design and it’s up there doing its job, providing communication to people,” she said.

Levine was also inspired in her life’s work by her father, a journalist who worked in the aerospace industry.

“I remember watching Star Trek with my dad when I was a kid back in the ’60s,” she said. “He worked for The Martin Company, Aerojet, TRW (and others). All that inspired me.”

Levine said she didn’t know any female engineers growing up, but that was not a deterrent. Skilled at math, and encouraged by her parents, she decided to pursue a life in the aerospace industry.

The East Coast native majored in astronomy at the University of Maryland, then switched gears to earn a mechanical engineering degree at West Virginia University. About that time, her parents moved to California – a hotbed for the aerospace industry. Levine followed, and while her parents have since moved back East, the West Coast became home for Levine.

In the decades since, she’s worked for an impressive array of high-profile companies, including Rockwell, Northrop, NASA’s Jet Propulsion Laboratory, TRW, Hughes and Boeing.

Her experience designing satellite payloads for Boeing and other companies brought her to Viasat about three years ago. Levine met several Viasat employees while working on ViaSat-2 for Boeing.

“And since I knew most of the team I’d be working with, I felt I wasn’t going into something cold.”

Levine’s only concern was that she could stay in Los Angeles, her home since 1982 – a request to which Viasat agreed. Levine has an office in Tempe, AZ – where the payloads for the first two ViaSat-3 satellites are under construction – and works there for a few days every 2-3 weeks, otherwise working from her home.

“I like being able to work from home,” Levine said. “I can work with a cat sitting in my lap, which I think is pretty ideal.”

Levine works on the payload’s mechanical design, determining the ordering, quantity and location within the payload of cables and other hardware, integrating the mechanics with the electrical, placing elements to ensure the combination stays at the proper temperature and addressing a myriad of other vital concerns to ensure the satellite will properly function when it’s 23,000 miles from earth in the harsh environs of space.

Among the things Levine loves most about working at Viasat is interacting with younger engineers.

“This is a bit of a second career for me,” she said. “I like working with the young people, teaching them a little bit and making sure they understand not so much the technical stuff but about looking at things from somebody else’s point of view.

“Everybody at Viasat seems to be very smart, dedicated and very good to work with,” she said. “I’ve found they’re willing to consider whether there might be a better way to do something.”

Levine’s coworkers clearly appreciate her both professionally and personally.

Viasat Mechanical Engineering Manager Thom Messenger worked with her while she was at Boeing.

“At Boeing, Gail played a vital role in by being one of the primary interfaces between Viasat and Boeing,” he said. “Learning that she was taking an early retirement from Boeing, we immediately recognized that Gail would be a valuable asset at Viasat and extended an offer; luckily, she accepted.

“Gail has made an immediate and positive impact at Viasat. She has brought years of payload design and assembly experience. She’s meticulous about her work and expects the same from others – a trait that is vital in space design.”

Mechanical engineer Bob Berg, who also works with her in Tempe, describes Levine as conscientious and hardworking.

“Gail brings to the team a wealth of knowledge she gained while performing similar duties during her career at Boeing,” Berg said. “This knowledge is invaluable in maintaining the great working relationship with Boeing and ensuring efficient and successful integrations for the Viasat payloads. She’s also fun to work with and, in my case, has been very patient in bringing me up to speed on this complex program.”

During her free time, Levine occasionally hikes with friends and recently took a trip to Utah’s Zion and Bryce Canyon with a group of female hikers. She has also traveled to Israel, Africa and France. She is a Dodgers fan and likes seeing comic book movies with a group of fellow engineers.

But because her job involves travel, Levine especially enjoys being at home during her off hours.