Future tech is the focus of this Viasat engineer 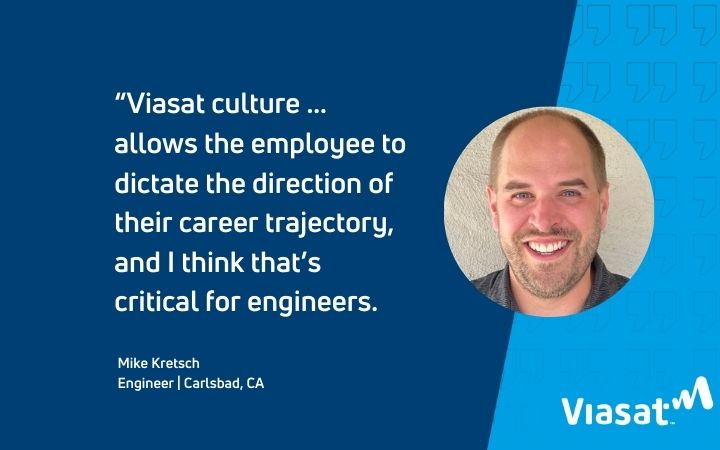 For engineer Mike Kretsch, the most exciting work at Viasat today is in Government Systems, specifically products he and his team are helping create for the Department of Defense (DoD).

Viasat is among a group of companies included in what’s known as the “New Defense Industrial Base,” providing cutting-edge products that include advanced communications, cybersecurity, and networking to empower warfighters. They’re also operating on a fast-paced development cycle — a marked departure from the military’s traditionally slower pace.

It’s all to keep the U.S. on pace with the dramatic changes in warfare. Where once a country’s military strength was measured by its tanks, bombers and warships, many of today’s threats exist in domains such as cyberwarfare and space. Warfighters require high-tech equipment and services that operate on the ground, in the air, at sea and in space.

As manager of an advanced products group, Kretsch is working on new waveforms and hardware platforms intended for use in future space missions and embeddable products. It not only fulfills an important need, its’s also personally satisfying.

“The applications are challenging, and that makes the work more enjoyable,” Kretsch said. “That’s what most technical engineers prefer on a day-to-day basis.

“We have to respond and change with the market, so there’s a large technology development focus in this area now. From an engineering perspective, it’s a very encouraging time to be in Government Systems.”

A techie from the start

“As a child, I always thought I’d be an engineer,” he said. “I steered away from English and literature. Going down a route like engineering was more innate. I was more technical by nature.”

A native of Minnesota, he earned a bachelor’s degree at Purdue University, and a master’s in electrical engineering at the University of California San Diego with a focus in adaptive signal processing and digital communications.

While at Purdue, he participated in a co-op program that allowed him to work for Hughes Space and Communications (now Boeing), helping develop RF (radio frequency) satellite payloads. It was ideal training for the career that’s followed.

After graduation Kretsch continued his employment at Hughes, working on the Comanche stealth helicopter performing electromagnetic modeling of the helicopter’s radar signature. In 2004, he moved to San Diego and worked for a decade at SAIC, developing radar algorithms and complex embedded systems to host these algorithms.

His algorithm focus there was with adaptive signal processing for radar products, experiences that are relevant to the work he does at Viasat today.

When SAIC split in 2013, Kretsch stayed with the parent company, renamed Leidos. But the culture of the company changed in the 10 years Kretsch worked there, he said, prompting a search for something different.

“I had heard a number of good things about Viasat through the grapevine, and I had a good friend who was a consultant at Viasat in the past who spoke highly of the culture,” he said. “And it was a San Diego company. That was important for me because I didn’t want to move.”

Beginning in 2019, Kretsch assisted senior management in a year-long independent verification and validation review of the upcoming global ViaSat-3 payload. While the process was long, Kretsch said he was gratified with what he learned.

“I was told me the beginning, ‘You’re now in the boat; you’ve got to make sure the boat doesn’t sink,’” Kretsch said. “By the time I was done, I was happy to be in the boat.”

As impressive as ViaSat-3 may be, Kretsch finds his work in GS advanced products even more impactful.

“There’s a giant pivot going on in DoD, and we need to change with the market,” he said.

That pivot is triggered by what some call the new Cold War or Cold War II, tied to rising tensions with China. China has evolved into a near-peer competitor and is expected to become the world’s largest economy in a few years. U.S. Intelligence officials say it is “pushing to revise global norms in ways that favor the authoritarian Chinese system."

“That means we can’t just focus on the simpler solutions for asymmetric conflicts as we have since the end of our last Cold War,” Kretsch said. “We need to focus on differentiating technology, and the government is adapting to that need quite dramatically. They’re demanding solutions that can match China’s for the Pacific theater, so we’re pivoting heavily to address future Pentagon needs.”

Kretsch believes Viasat’s culture gives it an edge over other companies that contract with the DoD.

“The culture is more employee driven, which I think is a benefit,” he said. “It allows the employee to dictate the direction of their career trajectory, and I think that’s critical for engineers. I also think that’s why Viasat has such a high retention rate relative to our industry peers.”

When he’s not working, Kretsch says his life revolves around his two children, ages 7 and 10.