A path from intern to president

Craig Miller set out looking for something to do in the lab; he now heads Viasat's Government Systems division 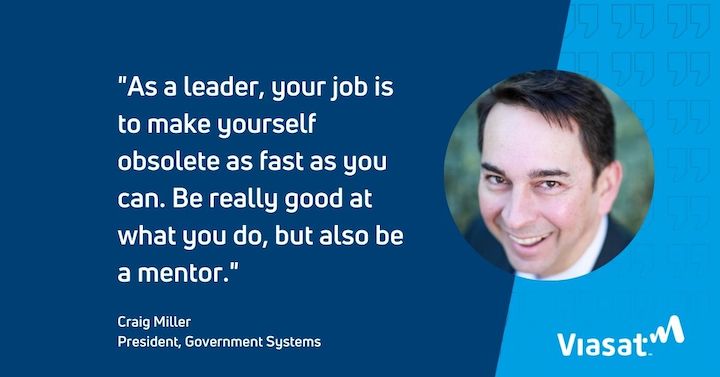 When a young Craig Miller arrived at Viasat as one of its first interns in 1993, he was told just to dive in. And so he did, head-first. Now he is President of Government Systems.

In 1993, Viasat’s intern program was new and relatively unstructured. And for Miller, then a University of Arizona student majoring in electrical engineering, that worked just fine.

“They led me to the lab and said, ‘Go find something to do,’” said Miller, who set out to learn as much as he could about the company, which had only 50 employees at the time.

“I got to know everyone,” he said. “I talked to them about what they were doing – what they liked and didn’t like. I learned a ton that was totally out of the sphere of being an intern.”

More than anything, Miller says he learned how to find gaps and fill them. “And that’s basically all I’ve done my whole career,” he said.

Miller enjoyed the experience so much that he returned for a second internship in 1995, and joined the company full-time soon thereafter.

“Since that time, I’ve done pretty much every technical job there is to do here,” he said. “First it was full-time networking. I’ve also done software and systems engineering, modem design, run programs, worked in business development, and on the commercial and government side.

“I can’t think of a time when I’ve done the same job for more than three or four years. But that’s a feature of my personality – I like learning new things.”

It’s the continuation of a pattern that began in childhood.

“I would become obsessed with a particular subject and learn as much as I could about it for months. Then, it was on to the next one,” he said. “For a while, I had to have the world atlas or globe on the table because I was really into geography. Then, I was really into dinosaurs.”

It’s no surprise, then, that Miller struggled to settle on a single career path. He considered becoming an attorney, a veterinarian, and an engineer. Influenced by family members who were engineers, he began his studies there and stayed with it – a choice he does not regret. While he worked briefly for Hughes Aircraft Company after graduating, the rest of his 25-year career has been with Viasat.

Miller stepped into his current role in May. He’s responsible for leading the company’s global defense business, which exceeds $1 billion in annual revenues. He’s also served as the segment’s chief technology officer, charged with setting and communicating the technical strategy for Viasat’s diverse portfolio of defense products and services.

He also worked with the design team that developed the ViaSat-3 global satellite constellation, serving as a liaison between the company’s commercial and government business segments.

His many jobs have required regular interaction with other teams and individuals at Viasat. And while Miller is both upbeat and a fast talker, he says, “I’m way, way, way over on the introvert side of the Myers-Briggs personality test. When I come to work, I know that I have to talk to people and be engaging. I’m exhausted at the end of the day. But depending on what you want to do, you have to buck those trends, go out of your comfort zone, and do those things.”

His various positions also mean he has a thorough understanding of both sides of the business. And what he sees excites him.

“ViaSat-3 will be incredibly transformative, and a springboard to many other things,” he said. “But it’s not the only transformative thing we’re doing. The work we’re doing on the Government Systems side will push technology forward. That includes some of the things we’re doing with Next-Generation Tactical Data Links.

“Hybrid networking, and being able to route traffic dynamically based on data, is also really interesting. Being able to do that and mix other networks with ViaSat-3 is what’s going to position us as a valuable partner in meeting military communication needs.”

Miller notes there are promising opportunities for Government Systems across space, cybersecurity, and the exploration of new service models (such as SATCOM-as-a-service) to better support defense customers. And the impacts he sees from ViaSat-3’s technology extend well beyond the satellite.

“The network is way more important than the spacecraft itself,” Miller said. “The ground network is incredibly innovative, unique, and flexible. It’ll allow us to extend the capabilities of the system.

“We’re barely scratching the surface of what we’ll be able to do with ViaSat-3.”

As he adjusts to his new position, Miller said he’s occasionally felt overwhelmed, but his excitement about the future eclipses those moments.

Miller is driven to help young people who were in his position 20 or 30 years ago be successful. He believes the key for future leaders to achieve that success is to maintain curiosity and let go of ego.

"As a leader, your job is to make yourself obsolete as fast as you can,” he said. “Be really good at what you do, but also be a mentor. Teach the people around you – then go do something else. There are people who cling to the power of the job, but the measure of doing it right is when you’re not needed anymore.

Miller is married to Melissa, who worked at Viasat herself for 28 years. When he’s not working, he’s happiest outside playing tennis, golfing, or walking with the family’s two dogs.