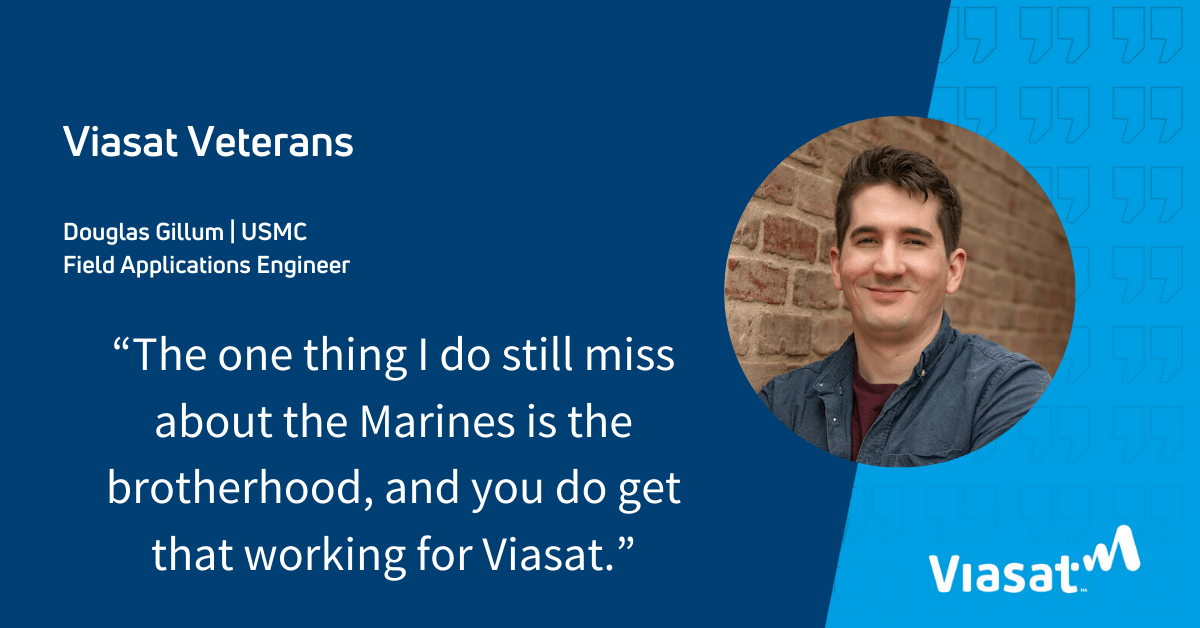 Viasat engineer Douglas Gillum was a college drop-out stocking shelves at a Florida grocery store when a chance encounter changed his life. A Marine recruiter approached Gillum as he worked, ostensibly to ask him about the benefits of Greek yogurt.

Gillum, now 27, is forever grateful for that 2012 grocery store meeting.

The work experience he got as a Marine led him to his current job as a field applications engineer at Viasat.

“I had no direction in life at the time,” he said. “Honestly, I don’t think I’d be in a very good place if he hadn’t walked up to me. That was one of those moments that clearly defined a path.”

Because Gillum had some computer skills, he was assigned to a ground electronics job specialty, helping maintain telecommunications and information technology systems.

“The formal purpose of it is to basically do any sort of maintenance for any telephone or computer systems in the Marine Corps,” he said. “But I ended up getting orders to a unit where I would deal almost exclusively in satellite communications.

“It was a new world for me. But I figured if I was in the Marine Corps and learning something that might be useful for career prospects later, something as niche as satellite communications was ideal. I decided it might benefit me fiscally to get good at it.”

And so he did.

Gillum helped provide crisis response to American embassies in Africa, spending part of his deployment in Djibouti. The location was remote, and he helped set up and maintain VSAT ground stations in the field, providing vital communications.

During his five years with the Marines, he also took note of the equipment they were using, thinking those companies could be good future job prospects. Viasat was among the names he repeatedly saw.

“In 2016 I was on a deployment where we were to use Viasat service through a hatch-mounted kit in a C-130 (aircraft),” he said. “During a pre-mission operations check, I was pretty fascinated that I could turn the antenna base and maintain service; up to that point, all of the equipment I had used were stationary antennas with no continuous tracking capability. I was even more amazed when we finally flew and I was able to stream videos uninterrupted — flying over the middle of nowhere.”

With those impressions in mind, Gillum applied for jobs at Viasat – among several other companies – after he left the Marines in 2017. He accepted a position as a network operations center technician.

At the company’s Carlsbad, CA headquarters, he’s found a home that extends beyond his skills.

“The one thing I do still miss about the Marines is the brotherhood, and you do get that working for Viasat,” he said. “Since I’ve been here, I’ve worked with several other Marines, and people in the Navy, Army and Air Force. So you get a little taste of that cultural connection. And the work ethic is similar.”

“I can keep being myself here. I didn’t have to change so much of how I talk and the way I do things.”

Since he started with Viasat in 2018, Gillum has worked in the government services department. He’s focused on Intelligence, Surveillance, and Reconnaissance (ISR) communications tied to government aircraft contracts.

He recently accepted a year-long assignment as a Viasat field applications engineer that will take him back to Djibouti. Gillum will support U.S. troops and aircraft there, providing support for daily operations of SATCOM hub assets and airborne mobile SATCOM terminals.

Gillum sees it as a great opportunity, and a good match for his skills and personality – something he’s found repeatedly at Viasat. Those factors not only make for a satisfying career, they also serve as motivation.

“I feel you’re trusted as an employee at Viasat,” he said. “People trust that I’m going to utilize my time appropriately and do my job. As the employee, it gives confidence and the good will to want to do more.”