For Department of Defense, unleashing commercial innovation is the quickest, best way to harness new technologies

Speaking at a recent conference, Viasat's Ken Peterman made the case for enhancing the military's satellite communications capabilities faster and more economically with private-sector technologies. 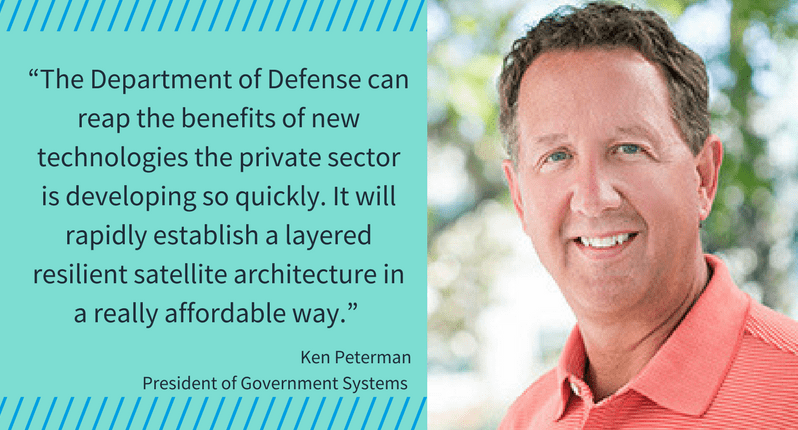 As the current constellation of Department of Defense (DoD) satellites reaches end-of-life and the threat envelop rapidly increases, we are approaching a crossroads where DoD should turn to the private sector as the quickest and most affordable path to improving its satellite communications technology.

That was the sentiment expressed by Ken Peterman, Viasat’s President of Government Systems on March 14. Peterman joined a panel of industry leaders at the Satellite 2018 conference in Washington, D.C. to explore ideas for enhancing collaboration between the U.S. Military and private sector to improve and accelerate adoption of new satellite communications (SATCOM) technology.

“The Department of Defense (DoD) can reap the benefits of new technologies the private sector is developing so quickly,” Peterman said in his opening remarks. “It will rapidly establish a layered resilient satellite architecture in a really affordable way.”

Peterman noted that a number of Viasat’s SATCOM technologies are evolving faster and being deployed more efficiently than what the DoD is currently using. He suggested the DoD continue to work with the commercial sector to take advantage of rapid technological advancements to improve mission effectiveness and increase warfighter safety.

The panel discussed the potential benefits of bringing multiple networks together to create an integrated satellite network architecture supporting nearly every type of military mission. Peterman said military forces shouldn’t be limited to a specific SATCOM network because providers are operating on separate networks.

“I think we want to leverage private sector technology investment,” Peterman said. “We want to roam freely among different networks so the DoD can use the best network available based on their current and emerging use cases.  This will ensure our warfighters always have the best service and most secure network available in even the most contested environments. This all comes down to the warfighter.”

Peterman recommended the DoD and commercial sector look to be interoperable at the network layer to provide warfighters with a seamless, resilient, agile, and protected SATCOM network available everywhere. “This is analogous to the commercial cellular/mobile networking model, which I think is a great model,” he said.

Asked whether the DoD should put more emphasis on implementing a permanent system of commercial SATCOM networks for military applications — instead of adopting them on a provisional basis — Peterman offered an analogy about kids growing up in today’s technology driven society to highlight the importance of ubiquitous connectivity.

“Let’s talk about the warfighter that grows up in today’s world,” he said. “They have grown up in a world where they are ubiquitously and continuously connected. They depend on the cloud as part of their decision-making process and to build a better understanding of the world around them.”

He noted that most of today’s youth have access to technology applications that provide them with situational awareness capabilities wherever they go — whether it’s finding out what time their friends are going to a movie, or getting directions to the theater.

Peterman went on to discuss how this applies to the warfighter of today.

“When young men and women put on a uniform and go into the service, we don’t just have a responsibility, we have an obligation to give them that same kind of connectivity that they have grown up to depend upon. We have the same obligation to provide the same ubiquitous connectivity to the solider as we do a civilian.”

Peterman closed the discussion by illustrating the need to test the performance of commercial SATCOM technology to speed up the process of DoD adoption.

“When people see with clarity how technology works in a warfighter context, and empirically measure the performance, a fact-based data base is created that characterizes the performance envelop of these various networks, and it’s the facts that will drive change,” he said.

Rather than relying on companies’ answers to questions in an RFP, testing and evaluating these SATCOM systems in a real warfighter context will illustrate exactly how these technologies can contribute to new mission concepts of operation, and how they improve situational awareness and mission success. Additionally, testing these systems in that environment would allow the commercial sector to continue to develop solutions and systems that answer the real needs of the warfighter.

Peterman noted that being able to test the performance of new SATCOM technology efficiently and accurately will likely be the determining factor when it comes to speeding up the procurement process. He encouraged a “fact-based empirical assessment of commercial technologies in a warfighter context.”

Viasat first demonstrated the performance capabilities of SATCOM military applications available on ViaSat-2 to a number of representatives from the U.S. armed forces in early March. The demonstration showcased the first satellite internet service to offer and demonstrate download speeds over 100 Mbps — more speed and bandwidth than the current DoD satellite constellations — and sets the stage for the ViaSat-3 SATCOM constellation.

This SATCOM system is the first in Viasat’s series of ultra-high-capacity global satellite networks, which will dramatically improve operational capabilities for military missions.