For business jet connectivity, a service to keep up with a changing internet

Connectivity equipment for business jets from Viasat is lighter and easier to install and upgrade than that of most competitors. 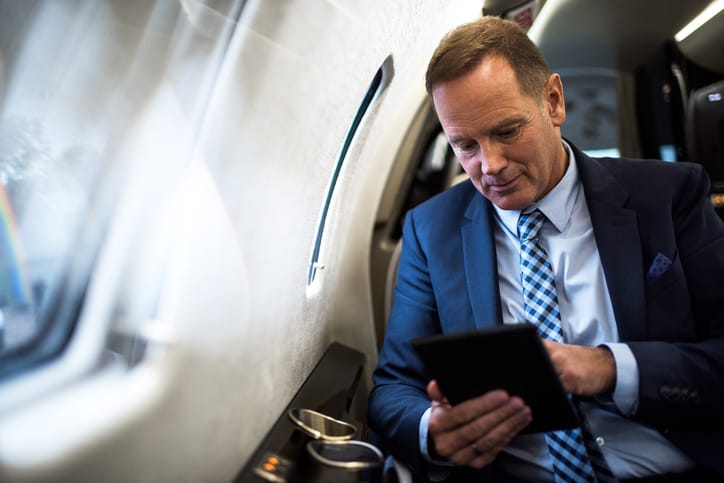 Business doesn’t stop when executives board a plane, and it’s widely recognized how essential it is to have a fast, stable internet connection on every flight for email, video streaming and conferences, and social media.

So once the decision is made to connect a large-cabin corporate aircraft, it isn’t enough to just get the “latest and greatest” technology. The system should be easy to install and maintain while providing enhanced connectivity as satellite technology evolves – without a major retrofit of the plane.

Those features are key to Viasat’s Ku-band Advanced and Ka-band connectivity solutions, and it starts with vertical integration: Viasat builds the Ka-band hardware, the shipsets — and even designs and operates the satellites. That makes us more nimble with upgrades than other companies that only lease space on satellites. It also allows Viasat to optimize the systems and solutions while helping control costs.

There are also some impressive advantages with the equipment.

“Our Ku-band Advanced system needs just three components versus our competitors, many of which have a minimum of five units,” said Marcus Oates, with Viasat’s business aviation division. “Our components are certified to be outside the pressure vessel of the cabin, which allows more use of the space inside the cabin. Our system is also lighter and doesn’t need the extra cooling and cabinets others may require.”

Viasat’s Ku-band Advanced includes a new, more powerful, fin-mounted antenna that helps drive connectivity speeds of up to 6 Mbps to the aircraft and can push as much as 1 Mbps to the ground. Our Ka-band system offers up to 16 Mbps download speeds, and upcoming satellites are expected to more than double that.

It’s fair to wonder if new satellites in the future will mean new equipment. But once the Ku-band Advanced system is in place, the path to Viasat’s new high-power Ka-band satellite system is an easy and fast upgrade.

The three Ku-band Advanced components are swapped for a “plug-and-play” Ka-band antenna, modem, and power supply unit. Since the Ka-band system uses the same wiring already installed for the Ku-band Advanced system, the cabin interior doesn’t have to be disturbed. That means minimal aircraft downtime.

“I’m estimating just a three-to-four day turn-time for an upgrade,” said Oates, who has over 20 years of experience with installations of large-cabin business aircraft connectivity systems. “I’ve also looked at the differences between installs, and Viasat’s simpler installation takes less time, saving on labor costs.”

Once the paint dries on the new antenna cover – the Ka-band radome – the aircraft is ready to fly.

Business aircraft today connect to Viasat’s growing constellation of Ka-band satellites – which includes ViaSat-1 and ViaSat-2, plus the upcoming trio of ViaSat-3 high-power “birds,” which will introduce global Ka-band coverage. The first two ViaSat-3 satellites are currently under construction, with the first expected to be launched in 2020.

Even now, before the first ViaSat-3 satellite is launched to add additional coverage in North and South America, our Ka-band coverage keeps executives connected while flying over 80 percent of the world’s most-traveled business aircraft routes, including North and Central America, the Caribbean, the North Atlantic Tracks and Europe.

Jets in the Gulfstream IV-class, and larger, can have fully backed-up connectivity by installing dual Ku- and Ka-band systems.

“There are a lot of airplanes that already have Ku-band onboard, and those customers have been very vocal, saying they want to keep their Ku system,” Oates said. “We have a smart system that does the work for you – it identifies the Ka- and Ku- territory. Ka-band is your primary service, backed up by Ku-band.”

Competitive systems also offer a backup, but from Ka-band to the older, underpowered L-band service or even regional air-to-ground systems.

Purchasing or upgrading a connectivity system for a business aircraft is a big decision, and downtime for aircraft is best kept at a minimum. Owners and passengers want to know if the system installed today can keep up with the growing speed and data demands just around the corner. Our answer is a resounding “yes!”

At Viasat, we’re always pushing the envelope on technology, with new satellites and networks expanding globally to enable even faster service in the next several years. We want to ensure our business aviation customers can enjoy that improved network with minimal interruption, which is why forward compatibility is now built into every system.