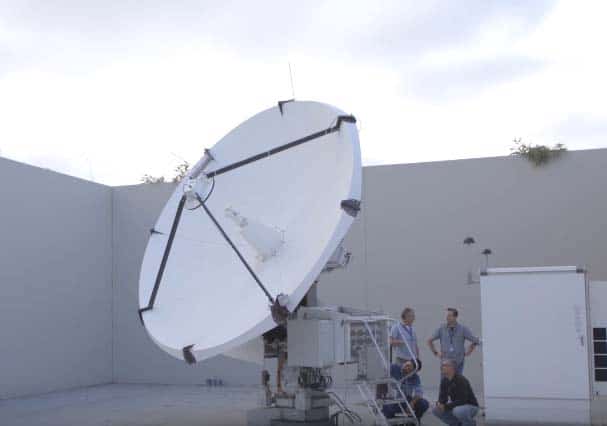 Not long ago, the notion that a single broadband satellite could do the work of a hundred or more of its predecessors was far-fetched. When we launched ViaSat-1 in 2011, we changed the industry’s thinking on that in a big way.

This past weekend, we made a big step toward showing that our new satellite, ViaSat-2, is ready to disrupt the industry once again.

Launched June 1, Viasat-2 has now arrived in its geostationary orbit, moved into its earth-facing orbit and successfully deployed the reflectors that will transmit internet signals.

It was time to give it a test drive.

The moment of truth came in the wee hours of the morning Sunday, Dec. 3 at Viasat’s Carlsbad, CA headquarters. Working with our partners at Boeing Satellite Systems International, a small group of our engineers took advantage of the first window of opportunity to contact the satellite and send data over it.

With whoops and cheers, the engineers tapped the world’s most powerful communications satellite to perform that most basic of internet tasks: browsing a website.

“This milestone is extremely meaningful because it was our first chance since 2016 to test the ground system with the satellite,” said Phil Lampe, program director for the ViaSat-2 ground system. “Even with that time gap, we went from enabling the first transponder to surfing the web across the complete end-to-end system in less than eight hours!”

That, Lampe said, is a strong indication of the system’s readiness and capabilities.

The weekend’s excitement was captured on video, which was then uploaded to YouTube over ViaSat-2.

Viasat will have full control over the satellite later in December, after Boeing “hands over the keys” following their readiness testing. The short window for this preliminary test came as a result of Viasat’s strong relationship with Boeing, according to RF systems engineer David Dieter.

“We worked all night from 1 p.m. Saturday to 9 a.m. Sunday with Boeing and the entire integration team to verify end-to-end system connectivity over ViaSat-2,” Dieter said. “The overall effect is early identification and reduction of risk for our push to bring ViaSat-2 into service.”

It’s gone a bit smoother compared to the service launch of ViaSat-1 six years ago, said Lampe, who served as the project engineer on that earlier launch.

“We’ve had the benefit to build on much of what we learned during the ViaSat-1 launch,” he said. “With ViaSat-2, we’ve had a working end-to-end field alpha system for well over six months, so we know the system and the organizations work well together going into beta testing.”

Even so, he noted that ViaSat-2 is a much more complex system than VS-1, and that there would no doubt be some more calibration taking place during the beta-testing period.

“ViaSat-2 is a fine-tuned machine compared to conventional commercial satellites, not unlike a high-performance automobile,” he said. “It’s going to take a little time and effort to tune properly, but the resulting increase in performance compared to its peers in space will be remarkable.”

For Viasat CEO Mark Dankberg, the weekend’s successful test was validation of the company’s drive to continually push the envelope of satellite technology.

“This is a great achievement for the Viasat team, our customers and our partners,” Dankberg said. “The ViaSat-2 system is the culmination of years of hard work and commitment to bringing a satellite platform to market that can deliver truly high-speed, high-quality broadband to many more people, and with a much greater geographic reach. We’re another step closer to bringing the ViaSat-2 satellite into service.”

The ViaSat-2 satellite system is expected to significantly improve speeds, reduce costs and expand the footprint of broadband services across North America, Central America, the Caribbean and a portion of northern South America, as well as the primary aeronautical and maritime routes across the Atlantic Ocean between North America and Europe.  ViaSat-2 is a geostationary satellite that operates in Ka-band frequencies. It was designed to offer high-capacity connectivity and wide coverage, with the flexibility to move capacity to where demand requires it. As compared to ViaSat-1, ViaSat-2 is expected to double the bandwidth, with more than 300 Gigabits per second (Gbps) of total network capacity, as well as provide seven times the broadband coverage.