Viasat and its engineers have kept the satellite industry not only relevant, but spurred it to new technological heights, says its long-time employees. 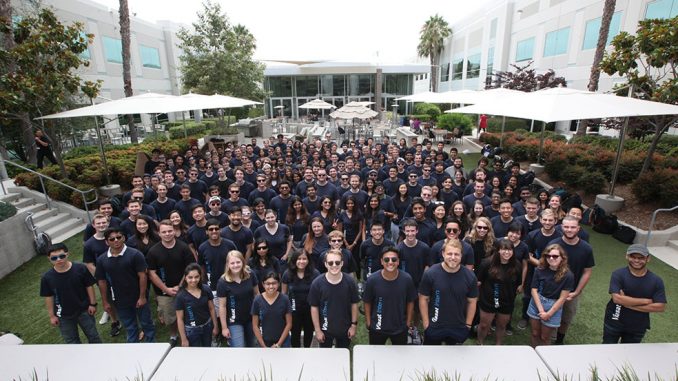 National Engineers Week is designed to encourage more people to pursue engineering and technology careers, and Viasat engineers say there’s no better place to do that than here. Viasat is a company founded and run by engineers that’s constantly bolstering its reputation for innovation, disruptiveness and openness to creativity. From the 33-year-old company’s earliest work with military satellite communications to today’s efforts to provide Wi-Fi to airliner passengers and first-time connections to remote areas of Latin America, Viasat has consistently pushed the limits of technology.

“A lot of other companies are just trying to keep up and make sure they have all the same features, while Viasat has a track record of always looking for that one technology that makes all the other features irrelevant.” —Peter Lepeska

For prospective engineers with a thirst for shaping the future, there could be no place better – a fact that’s evident in listening to some of the company’s top engineers. “As a company we look for disruptive innovation versus incremental innovation, which also means engineers have a really good time,” said Peter Lepeska, Viasat’s Chief Technical Officer of Acceleration Research Technologies. “A lot of other companies are just trying to keep up and make sure they have all the same features, while Viasat has a track record of always looking for that one technology that makes all the other features irrelevant. “Why is that interesting for engineers?” he asks. “Your work is going to be much more cutting-edge, and your job is going to be much more fun.”

Viasat forever changed and reset expectations for the satellite industry in 2011 with the launch of ViaSat-1. It was then the highest capacity communications satellite in the world – a designation now held by ViaSat-2 – offering more gigabits per second than all other communication satellites over North America combined. “If we hadn’t done that, either someone else would have, or the satellite industry would be dead,” said Kristi Jaska, Viasat’s Vice President of Engineering. “In general, the other satellite operators and providers were busy servicing their current customers, but not really keeping up with the trends in more and more internet usage. “Our engineering has made the difference. It’s an example of how really pushing the boundaries is the heart of our company.” With the upcoming ViaSat-3 program, the company took a larger portion of satellite production in house. (Boeing is a partner for the satellite bus itself.) Viasat is building the payloads at a custom-designed facility on its Tempe, Arizona campus. Each of the three planned ViaSat-3 satellites is expected to cover one-third of the globe, combining to make Viasat a global internet service provider. Each ViaSat-3 satellite is expected to deliver more than 1 Terabit per second of network capacity – more than triple the capacity of ViaSat-2. “A lot of our strategy is based on our technology, and a great example is using engineers and our technology to build these new satellites,” Jaska said. “It’s not just the satellite, but the infrastructure – the ground systems, the equipment on planes – everything that goes along with it. “It may be the satellite that’s the heart of it, but everything else has to keep up with it. It really ripples across ground and space.” Those innovations have helped keep the satellite industry relevant in a world of rapid technological change.

Another example occurs in the sky, where Viasat has redefined expectations in aviation. In just a few short years, the company has become a key player in the in-flight connectivity arena, bringing reliable internet service to commercial airline passengers, business and senior government aircraft, helicopters and other aircraft. JetBlue was the first airline to offer Viasat’s in-fight service in 2013. “In commercial air, for the first time ever, people were able to watch Netflix streaming video at 30,000 feet,” Lepeska said. “That’s because Viasat is not about accepting the status quo.” Many more airlines have seen the benefit of the Viasat technology; the company  has so far installed the service on more than 1,100 commercial aircraft, and it’s been repeatedly recognized as the best in-flight internet service worldwide.

As the company moves toward becoming a global internet provider, the need for engineers will grow, too. It will also change. “The really important thing out of school is that people learn how to think critically and creatively, ask questions and ask why,” Jaska said. “That can come from many different kinds of degrees. We need computer science, some electrical and some mechanical, people who can do data science, analytics, cloud computing, and other degrees that bring diversity of thought. “But we also are really interested in other majors and diverse degrees in areas like economics and the behavioral sciences. We have people who were originally music majors now working in engineering and programming. We need a village of people who have different backgrounds in thinking.” Both Jaska – who was the sixth person hired at Viasat – and Lepeska – a Viasat engineer since 2007 – can attest to the opportunities in engineering at Viasat. “I think there’s a sincere belief here that if you hire smart people and empower them, it results in the best outcome for the company,’ Lepeska said. “If you’re the kind of person who thrives in that environment – where you like to take initiative and be challenged – it really is a place you’ve got to love.” National Engineers Week, or EWeek, is Feb. 17-23. It was founded in 1951 by the National Society of Professional Engineers.