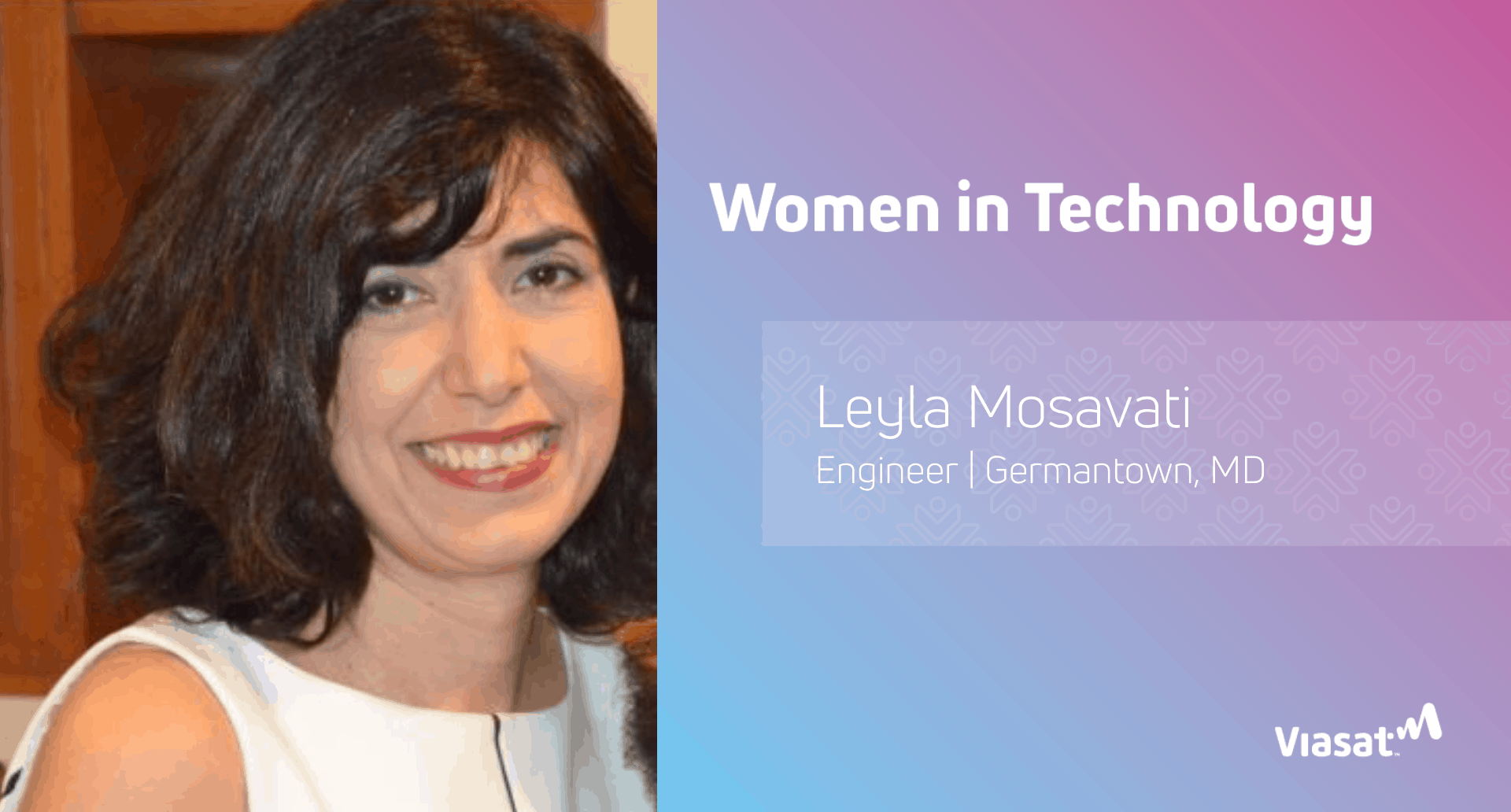 “We saw these huge turbines that were generating power; I was in awe,” she said. “I asked the plant supervisor who was giving us the tour, ‘What do I have to do to work in place like this?’ And he said, ‘You’ve got to be an engineer.’

Mosavati is now an integration and test manager in Viasat’s Germantown, MD office, where she’s currently working on the ViaSat-3 ground network – an assignment she sees as the culmination of her 25-year career.

“I feel like everything I’ve done so far has led to this project,” she said. “Things like this are why people become engineers.”

A native of Tehran, Mosavati grew up with parents who supported her career goals. Both had careers of their own; her father as a doctor, and her mother as a high school principal.

While she never wavered from her fifth-grade decision to become an engineer, Mosavati knew no other women in Tehran who were engineers or shared her goal. Gifted with an aptitude for math and physics, she said the lack of role models did not discourage her.

“It’s something I proved to be good at, so I pursued it,” she said. “And because of that, when I talk to younger people, I highly recommend the same for them: Pursue your passion.”

When Mosavati graduated high school, her parents encouraged her to pursue her engineering degree in the United States instead of Iran. Her sister was already in the U.S. studying computer science.

“Society at large (in Iran) was definitely discouraging for women in technology,” Mosavati said. “My parents said, ‘You’ve got to go someplace that will give you opportunities and not hold you back because you are a woman.’”

Mosavati enrolled at the University of Maryland. She was new to the United States, to college and to co-ed classes. Not only were schools in Iran gender segregated, the engineering classes she enrolled in at UMD were almost entirely male.

“I had all sorts of culture shocks – language barriers, cultural barriers – I felt lonely and homesick,” she said. “It was rough going for a while.”

But Mosavati found the men she met in engineering classes were polite, intelligent and shared her passion for learning. She also saw many other foreign students in her classes, all of which eased her transition. She also thought her stay in the U.S. would be temporary.

“I was still a child,” she said. “My parents knew, but I didn’t know I would not be going back.”

That became clearer after college, when she was hired at Hughes Network Systems, based in Germantown. Mosavati spent the next 11 years there, working as a principal engineer. During that time, friends introduced her to a writer, whom she married. Her life became firmly rooted in the U.S.

In 2006, a former coworker recommended she apply for a position at Viasat, whose Germantown office is just two miles away from Hughes’ headquarters.

Mosavati remembers the interview was grueling, and that she felt uncertain about her prospects. But securing the job at Viasat opened doors in both Mosavati’s career and personal life. She felt a new sense of autonomy and value, and greater freedom in how she spent her time.

“Viasat allowed me to have a family,” she said. “Before, I didn’t feel there was room in my life for kids and a career. When I started at Viasat, I realized I could have both. The environment was flexible. You have a project to do, but the focus is on that you get it done – not how you get it done.”

Mosavati’s children are now 11 and 8.

In her nearly 14 years at Viasat, Mosavati has worked in systems and integration on a variety of projects. She worked with Mexican Satellite System (MEXSAT) and Boeing to develop a ground system in Mexico. The ground network links to a trio of Mexican satellites that help provide telecommunications throughout the country.

Similarly, she was part of the National Broadband Network (NBN) project, which created a national broadband network for Australia.

But she says ViaSat-3 - Viast’s upcoming global satellite constellation -  is by far her most significant and challenging project.

“It’s very different because we’re not just trying to build something to someone else’s specifications and then sell it,” she said. “We building it for ourselves. There’s a lot more at stake.

“We are making a product that will make Viasat an even bigger leader than it already is. The pride of product is definitely much greater, and there is more extensive ownership and input into the decisions we’re making.”

But beyond those factors is the thrill of working on a project that is technologically significant.

“We are breaking technological barriers,” Mosavati said. “We’re pushing the technological limits of what these systems can do on a daily basis. There are a lot of unknowns. A lot of risks. It’s exhilarating in that sense.”

Her daughter has a T-shirt that captures some of Mosavati’s excitement. It reads, “Science: It’s like magic, but real.”

“That’s how I felt about ViaSat-3 when I first read the theories about how it was going to come together,” she said. “It seemed unbelievable, so outrageous an idea – that we can dare to dream that big, to aspire to this level of technological advancement.