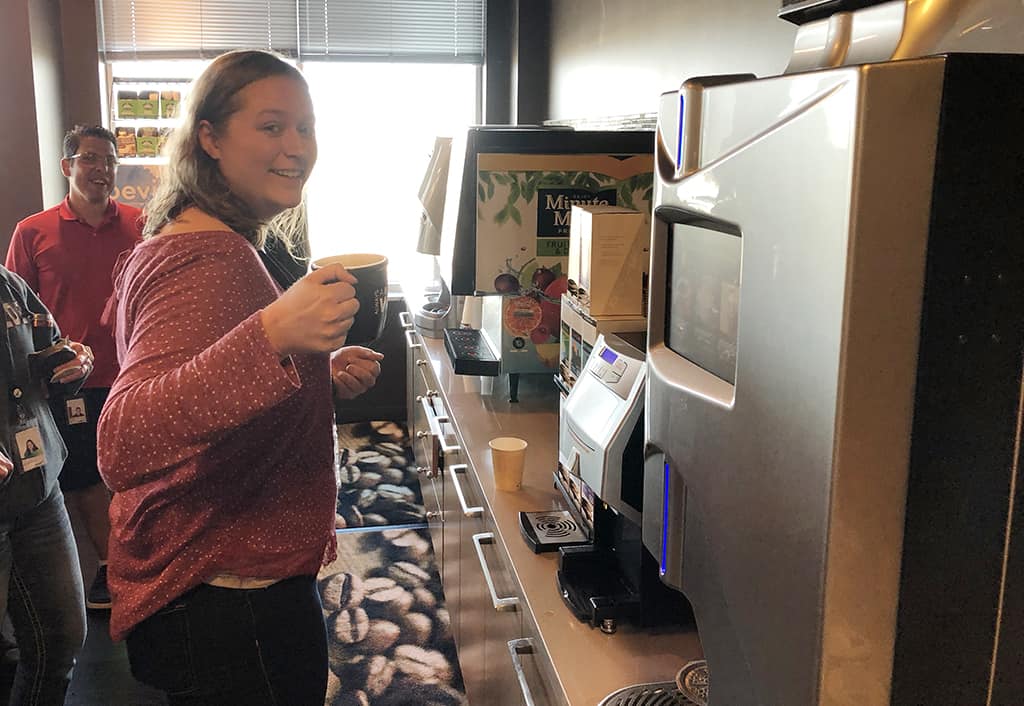 Thanks to Viasat employees, more than 700 trees will be planted and thousands of dollars donated to environmental groups – all a result of Earth Week celebrations held at Viasat campuses. All told, more than 500 employees from Carlsbad to the United Kingdom met with 13 environmental and conversation-focused organizations.

Hundreds of employees companywide also watched a short sustainability video on their smart phones. For each person who watched, a California nonprofit called Eden Reforestation will plant a tree. And that means 714 new trees will be planted in areas impacted by deforestation worldwide.

Each employee who attended received a reusable stainless steel straw. With the exception of Carlsbad – which let employees choose from among five nonprofits for a donation — Viasat also donated $200 to each of the organizations that visited our campuses and shared information with employees.

Here’s a rundown of the ways Viasat marked Earth Week 2019.

Six booths – including Viasat’s own Environmental Health and Safety department – represented a wide variety of earth-friendly organizations. As Viasat employees learned about the organizations, many munched on veggie burgers — cooked in the Viasat café specifically for Earth Day — and vegetables from Imperfect Produce. Viasat’s Environmental Health and Safety department also unveiled its new battery recycling program promotion on Earth Day.

After visiting all the booths, each Viasat employee could select one to receive a $5 donation. In all, 271 employees selected their favorite nonprofit, contributing a total of $1,355 to the five organizations.

Mike Manning, chairman of Friends of the Boston’s Boston Harbor Now told employees about the work they do to preserve the Boston waterfront.

Boston simultaneously held a used and unwanted shoe drive as part of the Nike Reuse-A-Shoe program. The shoes are reused to help build basketball courts, track surfaces and playgrounds.

Viasat Cleveland learned about ways to volunteer with West Creek Conservancy, dedicated to protecting natural areas, open spaces, streams and waterways in greater Cleveland, and about the office’s own success at recycling.

Denver Viasat employees met with representatives from Volunteers for Outdoor Colorado, which works on trails projects statewide and is always on the lookout for more people to pitch in.

Employees made some individual pledges — such as using less energy — for Earth Day and also participated in an event marking the swapping of coffee machines that use non-recyclable, single-serving coffee containers for those that use compostable coffee pods. Pre-kick, Denver disposed of 54,600 pods per year.

Viasat Duluth’s NextGen alliance hosted a booth to raise funds for Duluth-based SweetWater Brewery's clean waterway initiative. Our Georgia campus also collected about 100 pounds of e-waste from employees as part of an e-waste drive. Local waste management company Republic Services attended the event to educate employees about waste and recycling streams on campus and at home, and Toshiba representatives talked with employees about printer usage and waste. The Duluth campus also used the day to launch the use of the new waste and recycle bins and signage.

These employees heard conservation and wildlife in the Massachusetts area from the nonprofit Sudbury Valley Trustees’ executive director Lisa Vernegaard. Along with its sister Boston campus down the road, Marlborough also joined in the Nike Reuse-A-Shoe shoe drive.

The Bay Area Air Quality Management district, which regulates sources of air pollution in the nine counties surrounding San Francisco Bay, shared information on how to support the local community.

Tempe hosted the executive director of Arizona’s Natural Restorations, which removes graffiti, trash and other objects from outdoor recreation and wilderness areas. It contracts with military veterans for much of its work, and encouraged Viasat employees to volunteer with them. The chairman of the Mesa Valley Rose Society also shared his tips for gardening in Arizona’s arid climate.

Across the pond, our UK employees extended Viasat’s focus on international growth to Mother Earth. Viasat gave them sunflower, bean, radish and tomato seeds and recycled containers in which to grow them, complete with tips on gardening and composting.