Kathleen Wetherby’s early childhood experience with math started her down the road to career success. Working for Viasat has only enhanced the journey. 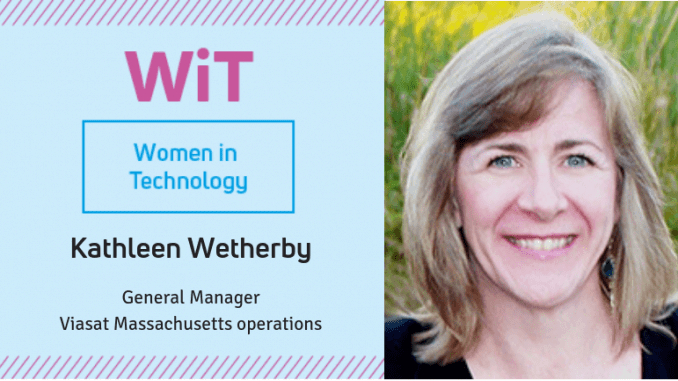 For Kathleen Wetherby, math and fun are forever linked. As a toddler, she was drawn by the happy sounds of her dad’s game nights – and that compelled her to learn cards. The general manager of Viasat’s Massachusetts’ operations credits that early exposure to math through card games for the tech career that followed. “My dad would have these uproarious poker games, and I totally wanted to join the fun,” she said. “To be there, you had to know how to play the games. And when it’s fun, you learn so quickly. “By the time I arrived at kindergarten, my math skills were far above anyone else in class. I don’t think I’m actually better at math than other people; I just had a tremendous head start. And so I was tracked from a very young age into advanced math.” And that put her on a path for success that is still climbing.

Wetherby’s still having fun and using her talent for math, along with the management and myriad other skills she’s gained in 20-plus years with Viasat and more than 30 years overall as an engineer. And just as in childhood, she still thrives on a lively atmosphere. She oversees both the Boston and Marlborough, Mass. offices, and is also Viasat’s general manager of Acceleration, Research and Technology. Among many other things, that means she helps make the internet faster. Like so many Viasat employees who’ve spent the bulk of their careers at Viasat, both the company and her work still captivate Wetherby. “When you peer around Viasat, everywhere you look there’s super-exciting projects going on,” she said. “This stuff is going to change the world; it’s literally going to change the world.” Given that, it’s hard for even Wetherby to believe she initially had to be convinced to work at Viasat. As a new mother in the mid-’90s, her then-employer agreed to a schedule that gave her the flexibility and extra time she wanted with her infant son. So when a recruiter said Viasat wanted to talk to her, Wetherby was reluctant. But former Viasat Massachusetts GM Ken Gamache is persuasive and not one to take no for an answer. When Wetherby finally agreed to an interview, she was struck by the people she met and the quality of the questions they asked. Still, she was on the fence – until CEO Mark Dankberg called and talked with her for an hour. For Wetherby, it wasn’t just that he called; it was what he said. “The fact that he cared so much about a mid-level software engineering position (at a company that was already 200 employees at the time) was huge and a big part of my decision to come,” Wetherby said. “He gets the idea of getting the right people on the bus, people he thinks are intellectually agile. “Even more importantly, it was solidifying to me to hear someone with such great strategic vision, and the energy to realize that vision. If you look at where we’ve come, he has executed on that vision.”

Wetherby has also found endless avenues for growth and fresh challenge at Viasat. Her diverse path has taken her from an electrical engineering degree to designing satellite telecommunication networks as a software engineer. That includes leading software teams and acting as engineering director. She recently helped introduce the Viasat browser to our residential customer base. “I have changed roles about six times since coming here,” she said. “I have found Viasat to be the kind of place where I can get the opportunities I want without ever leaving the company.” Clearly, her gender has not held Wetherby back at Viasat. She believes technology is among the best fields for women to pursue. “If you want to lead and want job security, I feel there’s no better place to do that than in tech,” she said. “In a lot of other industries, once you get up into leadership positions, there is much more bias that women must deal with. “Another part of why I’ve stayed here so long is I feel that Viasat tries hard to ensure everyone has an opportunity to succeed. I have not experienced any barriers to opportunity based on my gender or prioritizing my family.” Married to a laser physicist who’s equally passionate about his work, Wetherby is the mother of two young adults, both of whom followed her into engineering and technology.

Wetherby cites development of her staff as her greatest accomplishment. “I’m really proud of my team; they’re truly awesome and doing really exciting things for Viasat,” she said. “I think my team sees a growth trajectory that is promising, they’re given challenging work and they know how much we value them, “If you listen to (billionaire) Richard Branson, he says ‘Train your employees well enough so they can leave, but treat them well enough so they don’t want to’; I’m most proud of the fact I think we’ve done really well at that. We have extremely strong performers who are becoming experts in cutting-edge, highly-marketable technologies and are great team players.  Anyone would kill to have these folks on their teams: I’m super proud they stay on mine.” Wetherby and her team are now working on a program that will have global application and is expected to open doors for people living in economically challenged areas. While details of the project are yet to be released, Wetherby could scarcely be more enthusiastic about the technology and the changes she believes it will bring. “We’re actually building infrastructure and tools that are going to give access to people in these remote villages who haven’t ever had it before,” she said. “I think this next year has super exciting things coming down the pike for Viasat — and especially for the customers we serve.”