The head of Viasat’s newest Pride Alliance chapter jumped into the celebration head first, and happily involved most of the Dublin staff in the week-long tribute to diversity. 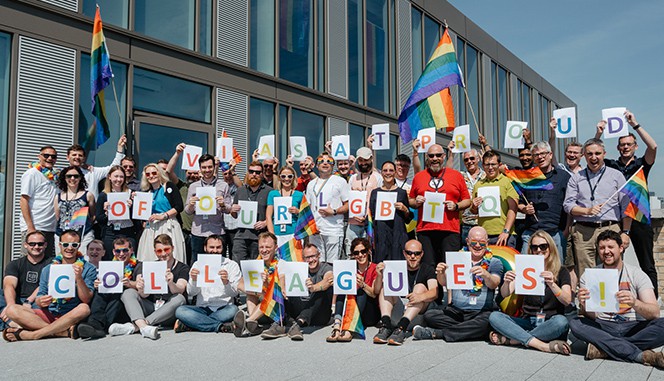 Viasat employee Stephen Kahlina was 17 when he came out to his family. He hasn’t seen them in the 13 years since. Kahlina’s spent a good portion of those intervening years championing the message of acceptance he didn’t receive at home.

He did so in memorable style at Viasat’s Dublin office during Dublin’s LQBTQ+ Pride Festival, held the last week of June. Kahlina decorated all three office floors, coordinated five days of food, music and drinks, and set up a staff photo that captured the unified spirit of the event.

“The place turned into a rainbow office, and the engagement from everyone in the company was incredible,” said product training manger Laura Ivers, who also works at the Dublin office.

Kahlina’s parents kicked him out of the family home when he made his announcement, forcing him to finishing his teenage years without parents. 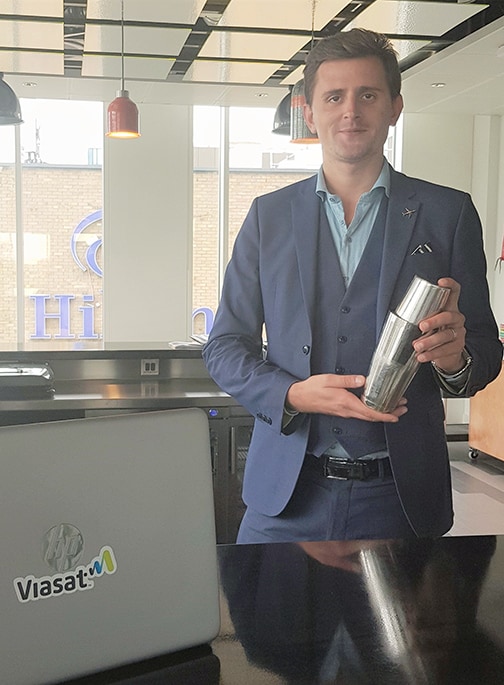 Stephen Kahlina at Viasat Dublin, seen here with his signature suit and shaker and below in full Pride mode.

“So I grew up,” said the 29-year-old. “Because I had that strong experience, I tell other people, ‘Accept yourself. If you can’t accept yourself, what’s the point?’”

He sees that same philosophy in Viasat’s policies.

“There are still huge numbers of people who feel they can’t be themselves at work, hide who they are and who they love,” he said. “Viasat has a culture of ‘be whoever you are.’ I’ve seen how much this means to people.”

Kahlina joined Viasat as a customer success executive in January after working at Microsoft, where he’d organized the company’s Pride events. When Viasat sent a company email about Pride Week, he decided it was time to do the same here.

The Pride Festival is a particularly meaningful event in Ireland, where a 2015 vote for same-sex marriage reversed an historic trend of conservative policies on LGBT issues. Until 1993, homosexuality was a crime in Ireland.

“Our country has grown and become extremely accepting and open,” Ivers said. “We’re very much a united nation. We’re trying to become more compassionate across the country.”

With Viasat opening its new Ireland site in Dublin earlier in 2018, a celebration was in order, Kahlina thought. But with the Dublin Pride Festival just two weeks away, time was short. Calling on contacts he’d made at Microsoft, and with the support of the Viasat corporate office, he pulled the event together.

“I decided I wanted to make a really awesome week, something special that involved the entire office,” he said.

Kahlina set a theme for each day, playing inspirational pop music, displaying dynamic quotes, dispensing cupcakes frosted in a rainbow of frosting colors and hosting a cocktail hour. The 6’4” Kahlina wears a three-piece suit to work every day, and used a metal shaker and his own recipes to prepare the drinks. The combination of color, sound, food and camaraderie all made for a memorable event, Ivers said.

“It was Stephen who drove it all, and did a brilliant job in a very short period of time,” she said. “It already seems like he’s been here forever. We’d be lost without him.”

Kahlina said his goal was to make his co-workers feel happy, accepted and unified at work, as he does.

“If people feel they can be themselves at work, if you’re not under pressure, your productivity is better; so the company benefits as well,” he said. “In the end what counts is that I respect you as a person so we work well together. This is the great message Viasat is sending – be whatever you are, we accept you.”

Pride Alliance is a Viasat employee resource group (ERG) – all of which are created and led by employees. They include ERGs for those in the disability community, Hispanic and African-Americans, women in technology, early career/new grads, veterans and LGBTQ+.

Viasat’s ERGs are closely linked with our broader company objectives of ensuring a welcoming, inclusive environment in which people feel valued for the differences they bring.