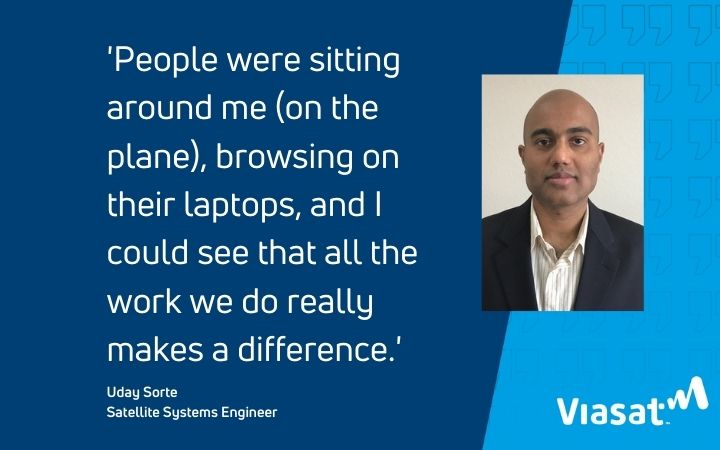 Before working at Viasat, Denver engineer Uday Sorte had twice left other companies because he felt restless, as though he’d accomplished all he could. More than six years into his career with Viasat, that feeling has been put to rest.

“I’m not even close to that,” said Sorte, a satellite systems engineer. “I always feel I’m not even scratching the surface here. There are so many things to work on.

“Every three or four years, we come up with a new satellite, and there is so much to do. Given the pace we are moving, it’s a challenge to keep up with what you need to do.”

And that suits Sorte just fine. The India native was born with a strong sense of curiosity and desire for intellectual growth, and he sought a career that would foster that. He once considered and then abandoned the idea of becoming a teacher.

“I thought the teaching profession would become stale pretty quickly; that it didn’t offer enough options to explore things, and I wouldn’t have room to grow,” he said.

Sorte credits his homeland and his teachers for helping him to discover and cultivate an early love of math, which led to a major in engineering.

“There is more pressure surrounding education there,” he said. “When we were growing up, parents, teachers and society in general put pressure on you to become getting better educated.”

His first job was at Hughes India as a software engineer. He later transferred to the company’s headquarters in Germantown, MD. As a Hughes employee, he discovered a love of satellite technology.

To learn more about other aspects of the industry, Sorte left Hughes to work at Newtec America, a Connecticut-based company headquartered in Belgium that develops satellite communication equipment and technologies.

After 10 years there, he again decided it was time to move on to greater challenges. Several of his former coworkers had gone to work for Viasat and told Sorte it was a good place to work. Sorte applied and, in early 2015, he was offered a position with the company in Denver.

“After spending so many years on the East Coast, I wanted something more relaxed and closer to nature,” Sorte said. “I chose Denver and have never regretted that decision.”

Sorte, married with two children, is also an avid outdoorsman – a perfect fit for the Denver area’s active lifestyle.

As a satellite systems design engineer, most of Sorte’s work with Viasat has focused on mobility services in aviation, maritime and government. That’s a challenge he’s enjoyed.

“I’d never worked on mobility before,” he said. “Working with airlines and beam-switching technology has been so interesting for me. Providing a seamless service from the time someone boards to the time they land is a challenge because as the plane moves, you go from one satellite beam to another satellite beam. We’re always working on improving mobility services for our customers.”

Sorte’s work extends beyond the satellites and planes in the sky to installation of the service and the ground network – a complex network of issues that keep his insatiable brain engaged and happily challenged.

“And now we’re moving toward global mobility,” he said. “That is one of the biggest challenges in front of us now.”

The support and challenges for mobility with ViaSat-3 will be unique, Sorte said, and the crew plans to be ready when the satellite comes online.

“Every country where we provide service has different demographics, different rules and requirements,” he said. “Getting all those things together takes time. I never have time to think, ‘What should I do next?’ ”

Sorte also likes the independence that comes with his role.

“I like that with Viasat, you are tasked to solve the problem,” he said. “You don’t always have to rely on somebody else. You find your domain, work on it, gain knowledge – sometimes by making mistakes – and improve in your domain.

“The more problems you solve, the more people start coming to you to help solve other problems. You promote yourself by doing good work, and people appreciate that.”

Sorte is excited about ViaSat-3 not only for its technology, but for what it says about Viasat.

“This satellite is so different, and we are way ahead of our competitors in terms of technology,” he said. “In commercial air, I think Viasat is a very big name; nobody’s even close to us right now. I really feel proud that we’re a leader in the market.”

Sorte was especially proud in 2018 when he got his first chance to try Viasat’s aviation service as an airplane passenger.

“I have been working on mobility so long; I know how it works, but I never got to use it,” he said. “So on a United flight to Carlsbad, I tried it. I browsed the internet and watched my first YouTube video on the flight.

“I was so happy to see not only that it works, but that what we are doing is a real thing. People were sitting around me, browsing on their laptops, and I could see that all the work we do really makes a difference for people’s lives. That day made me feel so good about the company and my work. I was so proud of what we’re doing.”