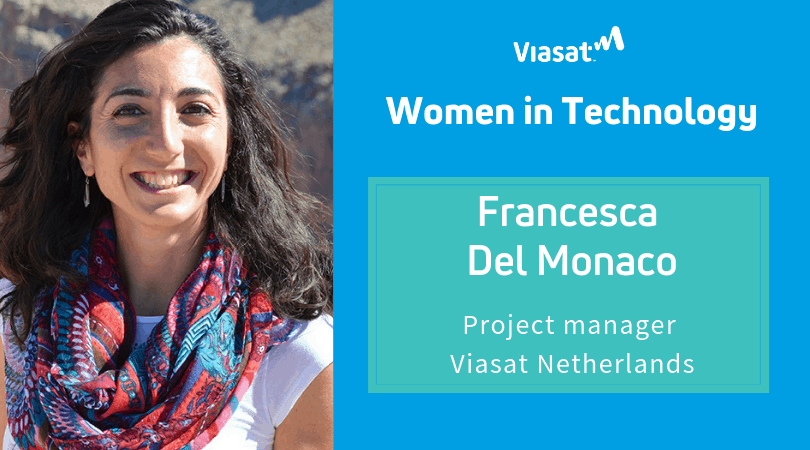 Both in her work building Viasat’s Netherlands office and her personal life as part of the backstage crew for a theater group, Francesca Del Monaco excels at making the show happen.

“Whether it’s my hobby or my job, I am always supporting the show,” Del Monaco said.

To date, there are just two people running the show at the Amsterdam office – project manager Del Monaco and senior software engineer Antonio Mondonedo. They share a leased space within a co-working facility situated along one of Amsterdam’s historic canals. It’s a picturesque setting for the serious work of planning Viasat’s future Netherlands infrastructure.

Del Monaco and her colleague are researching and supporting the development of software for the ViaSat-3 ground infrastructure, and the Viasat satellites to follow. ViaSat-3 is a constellation of three satellites that will encircle the globe. The second of the three will cover Europe, the Middle East and Africa.

“In the Amsterdam office we are mainly focused on developing innovations to improve the ground infrastructure for ViaSat-3.” Del Monaco said. “The starting point is the network infrastructure automation, which will improve network deployment and operations.”

There’s much more work ahead, so the Amsterdam staff will grow to meet the coming demands.

It sounds like a daunting task. But it’s the kind of intellectual challenge on which the 35-year-old Del Monaco thrives. It’s also among the few proposals that could have convinced her to leave her previous post at the European Space Agency (ESA).

Del Monaco’s a relative newcomer to the company, joining Viasat in November 2018. She was contently working at the ESA’s Netherlands office on the Galileo project. Galileo is Europe’s version of GPS, the satellite-based global positioning system owned by the U.S. Department of Defense.

“I was very happy about my previous job and I was not looking for a new one,” she said. “But I knew about Viasat thanks to the AIDAN project Viasat is running with ESA.”

AIDAN is a public private partnership between Viasat Antenna Systems and the ESA to develop key components of the ViaSat-3 ground segment.

A recruiter contacted her, and Del Monaco talked with Stefano Vaccaro, managing director at Viasat’s Lausanne, Switzerland office. When he told her Viasat needed someone to develop the Netherlands operations from the ground up, Del Monaco became intrigued.

“We are doing this completely from scratch,” she said. “Because I was used to being in a well-structured environment, this was something completely new. I’m passionate about innovation and change. I considered it the ideal situation to test myself and use all my past experience in a new challenge. This is the reason I really felt enthusiastic about this new adventure.”

A desire to know how things work

Del Monaco’s intrigue with technology and engineering began in childhood.

“For me, it was a desire to understand how things were working – television, music,” she said. “I was just really passionate about study, especially physics and math. My fascination of space was also quite strong.”

A native of southern Italy, she grew up with strong career role models. Her father is an attorney and her mother a Latin teacher. But her mother hesitated when Del Monaco said she wanted to be an engineer. When Del Monaco easily passed her first engineering exam, she gained her mother’s support.

“I demonstrated that I was able to do it,” she said. “She still worries. But I’m happy and passionate about my job. I’m sure the next challenge will be to demonstrate that I can manage both the career and family.”

In addition to her work at Viasat, Del Monaco loves theater – so much so she’s been a crew member with a theater group, managing lights, sounds and other behind-the-scenes elements.

Del Monaco is also enjoying life in the Netherlands.

“The quality of life is very high, and I like the people,” she said. “They are very direct and open minded and you feel that they really welcome people from all around the world. I really feel this is an amazing country.”

The qualities she loves about Amsterdam are similar to the ones she enjoys at Viasat.

“I feel a lot of trust at Viasat and I love that – the freedom to propose what I want to do and proceed with it. The growth mindset and innovation is important for Viasat, like it is for me – the idea of just not being satisfied about what we have already accomplished but to continue to ask more and to try to do more.”

“I find that really interesting, and I feel enthusiastic about the responsibility. At the same time, I also feel there is a big and solid company behind me, so I have the freedom and motivation to try, but I also feel really secure.”