Connectivity for the cars of tomorrow

The solution to the future of connected cars lies in a hybrid network of terrestrial and satellite connectivity in which Viasat will have a big role. 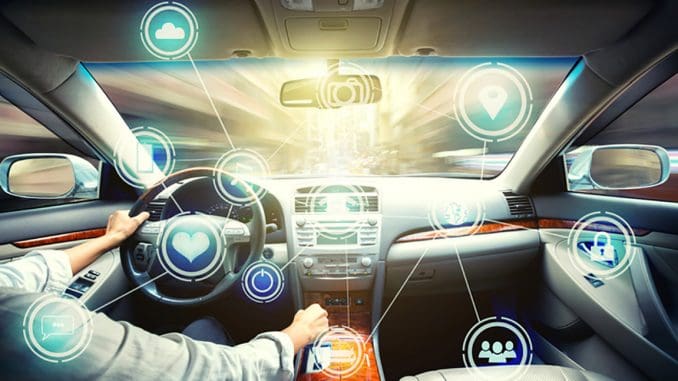 Today’s cars have as many as 50 computer systems in them, almost certainly making your SUV the most sophisticated piece of technology you own. As technologically intricate as cars are today, they’re about to become much more so – and satellite internet will play a big role in our future mobility.

Sensors in the cars of the future will allow vehicles to almost instantly share information – including speed and location of surrounding vehicles, changing road conditions and obstacles – ideally reducing traffic congestion and accidents.

Want to find the shortest drive-through line among several nearby fast-food restaurants? See if there’s a parking spot for you at your favorite hiking trail? Know ahead of time whether traffic’s backed up at the next intersection? With multiple sensors in multiple cars communicating back to a base, all that information and much more will be readily available.

Traffic lights, roads, highways and entire cities eventually will be built or retrofitted to further enhance public safety and comfort.

The car of the not-so-distant future will function more as a moving room; when the driver’s attention to the road is no longer required, driver and passengers can instead work, watch movies or shop online.

But because vehicles move – and do so through a variety of geography, terrain and weather – they present a unique connectivity challenge. One technology won’t serve the connected car’s needs. Instead, engineers are working on hybrid approaches that combines ground-based and satellite connectivity. Hybrid connectivity is already used by satellite radio, but the multitude of applications embedded in future vehicles require an innovative combination of the two networks.

So where does satellite fit in?

The improved speeds of 5G, the next generation of mobile, hold part of the solution for the future, but not all. The cost of building the many “small cell” antennas 5G needs means that, like most new technology, it will come to urban areas first, and the tougher-to-service rural areas much later. Here again, satellite is a logical piece of the connectivity puzzle as part of a hybrid network.

“I think there’s a quite natural complement between terrestrial and satellite networks to ensure broadband is everywhere,” said Ferdinando Tiezzi, a business development director who works with Vigano in the Switzerland office. “With satellite, you can provide some services more efficiently and you can follow vehicles out of the main cities.”

Part of the challenge is that dual connectivity requires two antennas on each vehicle — one for 5G and one for satellite.

“For satellite to be present on vehicles, we need to have a terminal that can be well integrated into the vehicle,” Tiezzi said.

The phased-array, flat-panel antennas Vigano helped design are part of the solution; they can be electronically “steered” to track a satellite’s position. And they’re compact and lightweight, making them ideal for connections on moving vehicles.

The antennas also need to be priced right to keep the cost of a connected car reasonable.

Viasat is already testing dual-sourced vehicle connectivity in three ambulances, as part of a pilot program in Western Europe.

Ultimately, the upcoming ViaSat-3 satellite constellation, which will provide global coverage, will be a major step to making the complex formula of connectivity and affordability work.

Each of the three ViaSat-3 satellites is expected to have at least one terabit per second of throughput capacity – more than the rest of the world’s telecommunications satellites combined.